Title: On the Terminal Rotation Rates of Giant Planets

The rotation periods of Jupiter and Saturn are 9.93 hours and 10.7 hours, respectively. Now, compared to our tiny Earth that lazes around on a 24-hour rotational period, you might think,  “wow, those are some zoomy-bois.” However, our best theories of planet formation tell us that, based on how massive they were when they formed, they should really be doin’ a faster spin.

How do you form a Jupiter?

So let’s say you want to make a Jupiter, just for the heck of it. If you follow the rules of our understanding of general planet formation, there are three main steps. You start inside of a protoplanetary disk. There is some sort of gravitational instability where heavy metals can gravitationally collapse and start to form a metallic core. This core acquires a gaseous envelope which can then feed the newly forming planet. Once that gaseous envelope is about the size of the initial core, the planet enters a stage called “run-away accretion.” That just means that material around the planet falls quickly and efficiently, adding mass rapidly. And BAM you have a Jupiter-like planet (technically called a Jovian planet). But, following this simple model, once the run-away process begins, the planet is accreting so much mass that our new Jupiter spins faster and faster and has no way to let go of any of its angular momentum. In this simple model, the surface of the planet can reach speeds that equal the escape velocity which means that the planet breaks apart. That’s not great for planet formation. Plus, when we observe Jupiter and Saturn, and now that we’re gathering more and more data of jovian planets outside of our solar system, we continue to see rotational velocities well below the planets’ escape velocities. So how in the heck do we slow down a young energetic planet? We turn to the answer that all astronomers look to in times of need: magnetic fields. 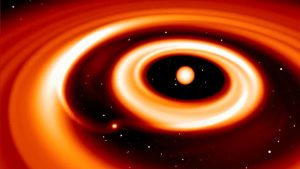 Figure 1: This image is taken from a high resolution simulation of a Jupiter forming using the method above. The young Jupiter is shown as the bright orb clearing a gap within the protoplanetary disk. (Image: Frederic Masset via How Planets Like Jupiter Form)

Setting up the problem of slowing down a chonker like Jupiter

Today’s paper attempts to lay the groundwork for solving this angular momentum problem in Jovian-planet formation using magnetohydrodynamics. Big (scary) word, yes, but put more simply, this paper creates a semi-analytic model of a newly forming Jovian planet with a strong magnetic field, and explores how this might slow the planet down. The model breaks the problem into two parts: the circumplanetary disk and the planet itself. Each part of this problem has equations that describe key parameters, such as the temperature, density, and abundance of metals in the surrounding envelope. For the planet part, the author calculates a magnetic field strength based on a typical luminosity of young exo-jovian planets, and can use all of these properties to calculate the electric conductivity and magnetic induction of the system, which would produce the forces that affect the speed of planet roation. “Running” this model consists of calculating each of these equations over a series of time steps so that one can further understand how each of these factors change and affect each other as the planet forms.

How the giant chonker was slowed down

The results of the model are illustrated in Figure 1 below. The finding of this paper is that if we consider the Jovian protoplanet to have a significant magnetic field, that field will invoke a force in the opposite direction of the rotation of both the circumplanetary disk and the planet itself. Basically, the magnetic field ‘couples’ to the surrounding disk. Since there is now a force in the opposite direction of the original motion, the planet slows its spin. Angular momentum leaves the system as material feeding the planet gets kicked out of the system and back into the surrounding protoplanetary disk environment. 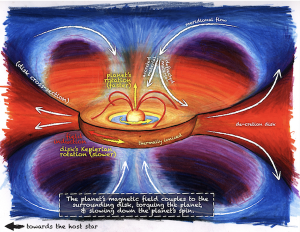 Figure 2: An illustrative view of planet formation and the effect of magnetic fields (red lines). We are taking a look inside a protoplanetary disk, with the host star to the left, zooming into a jupiter-like planet being formed. The planet has its own circle of influence, the edges of which correspond to the purple regions. We can see that material flows onto the planet from above, and that material can only fall onto the planet if it is very nearly falling directly down. Material that falls just off to the side gets added to the de-cretion disk and thus shucked off into the gaseous nebula. The planet slows down via magnetic field induction that invokes a force in the opposite direction of the original Keplerian rotation, which is the same direction as the planet is rotating. [Figure 2 in paper, see paper for higher quality image]

This paper set up a simple semi-analytic model that did the job of adding magnetic fields to our picture of planet formation. And this model has shown that with a strong magnetic field, is it not only possible to slow the spin of the planet down to speeds that we observe, but it gets slowed down quickly. Of course, there are more details that could be added to this model, and there are assumptions made that are difficult to back up with observations. Planet formation in general seems to happen relatively fast and early in a solar system’s life time, so it is hidden from view and hard to catch. But even with this ‘simple’ model, we can see that magnetic fields are certainly a key factor in the mystery of the slow spinning Jovian planets.

Hi! I am a forth year graduate student at the University of Michigan. I study protoplanetary disks, which set the stage for planet formation. For the past few years I've been using high resolution ALMA data to pull out the 2D thermal structure of different types of disks using thermo-chemical modeling. Outside of astronomy, I love belting showtunes, eating Thai food, I enjoy crafting, and I love to travel and explore new places. Check out my website: https://sites.google.com/umich.edu/jcalahan

Exploding stars and sleight of hand: A case of magnetic misdirection