YiWon Kim is a rising senior at the Taft School in Watertown, Connecticut. He conducted this study at the Columbia Astrophysics Laboratory under the guidance of Professor Charles Hailey, with coauthors Michael Jang and Eric Wang. He is now at work on a project that analyzes the relationship between panspermia and abiogenesis in multi-planetary systems.

A High-Mass X-ray Binary (HMXB) is a binary system with a compact collapsed star (such as a neutron star or black hole) and a high-mass companion star (≳10 M☉). HMXBs produce x-rays as mass is transferred from the high mass companion star to the compact star. These systems are of interest as they can provide insights into the role of molecular clouds in star formation and into modeling stellar evolution and gravitational-wave events. HMXBs are mostly found in the disc of the galaxy, while the galactic centre, dense with molecular clouds, has been thought devoid of HMXBs. 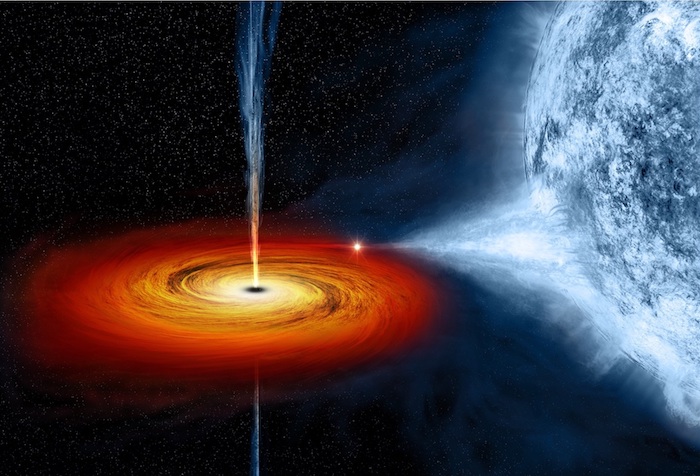 We went searching for HMXBs in the galactic centre using x-ray data from the Nuclear Spectroscopic Telescope Array (NuSTAR) and Chandra telescopes. We located the HMXBs using the Chandra data, as Chandra’s angular resolution of 0.5 arcseconds makes its data great for determining the location of a source in the image. The companion stars were identified in the Spitzer IRAC Galactic Center survey. We determined the likelihood that the detected companion star is actually unrelated to the x-ray source using the distribution of nearby bright infrared sources and verified that the companion stars are associated with the HMXB candidates. We also detected periodic pulsations in the power density spectrum and Swift hard x-ray light-curve analyses, due to the spin period of the compact source as it accretes mass. The companion stars were identified as O spectral type (≳15 M☉), typical of HMXBs.

The result is we found three new faint HMXB candidates in the central 30 parsecs of the galactic center near the supermassive black hole Sagittarius A. These candidates have x-ray luminosities of ~1033 erg/s, significantly fainter than typical HMXBs (~1036 erg/s), indicating NuSTAR’s unprecedented sensitivity. It is plausible that the galactic centre contains additional faint HMXBs hitherto undetected, which may now be discovered thanks to the high sensitivity of NuSTAR.

If you are an undergraduate that took part in an REU this summer and would like to share your research on Astrobites, please contact us at [email protected]!