The European Space Agency’s Gaia mission has revolutionized astronomy, and will continue to do so as its mission progresses. Pristine color-magnitude (or Hertzsprung-Russell) diagrams can be made with the extremely precise distances the mission provides uncovering new features. Today’s paper focuses on explaining some interesting features discovered in the white dwarf sequence seen in Gaia’s second data release (GDR2).

White dwarfs are the end state of most stars. After evolving off the main sequence, low mass stars shed their outer layers, leaving behind an extremely hot core of (in most cases) carbon and oxygen. At this point the white dwarf will cool off forever. GDR2 revealed some interesting structure in this cooling sequence including evidence of double white dwarf mergers and a splitting of Hydrogen atmosphere white dwarfs (DAs in the A branch) from those with Helium atmospheres (DBs in the B branch). In this context, a branch is a concentration of stars off of the main sequence which stars evolve along or through. A third and less understood branch was found to contain DQ white dwarfs (which show carbon in their atmospheres) and was named the Q branch. The GDR2 white dwarf cooling sequence is shown in Figure 1. 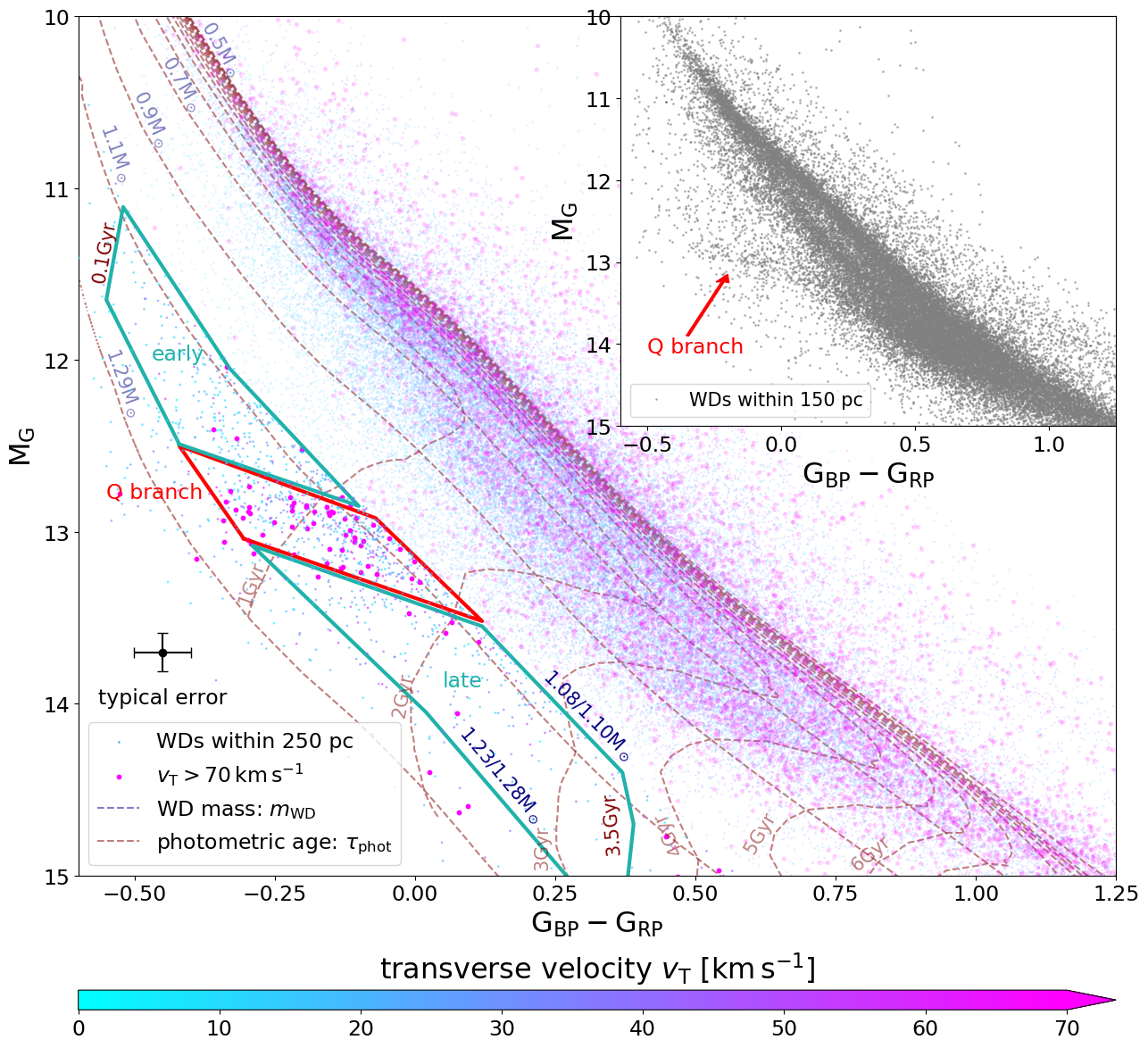 Figure 1: The HR diagram of white dwarfs selected from GDR2 for this work. Model ages and masses are indicated by dashed lines. Color indicates the velocity of each star. The Q branch is indicated by the red arrow in the inset and outlined in the main figure. Figure 1 in the paper.

This Q branch is not aligned with the lines of constant age or mass indicating it is not an over density in a certain type of white dwarf and is instead caused by a delay in cooling. Further evidence of the cooling delay hypothesis is given by the velocity dispersion of stars in the sequence. As stars age there is an increasing probability of gravitational interactions with other stars. These interactions “stir” the stars and increase their velocities with respect to the average movement of stars at a given location in the galaxy. As shown in Figure 1, there is a clear excess of high transverse velocity stars (pink dots) in the Q branch, indicating that they are actually much older than would be predicted by their position on the HR diagram. Interestingly, the stars in the “late” branch in Figure 1 are lower velocity, yet cooler, than those in the Q branch, indicating that there is likely more than one population of stars: one that has a delay in cooling and one that does not.

To test this hypothesis the authors ran a statistical model of white dwarf evolution. The model includes double white dwarf mergers (which also produce a discrepancy between velocity photometric ages), tracks the age and velocity of the stars, and tries to match the observations. The parameters of interest for the cooling hypothesis are the fraction of stars which undergo a cooling delay and the length of that delay. After examining many other parameters (see secion 4 of the paper for all the gory details) it appears as though 6% of high-mass white dwarfs experience an 8 billion year delay of cooling as they evolve along the Q branch. Since this delay causes a pile-up, about half of white dwarfs on the Q branch are delayed. They also constrain the double-white dwarf merger fraction to about 22% of massive white dwarfs. Figure 2 shows the HR diagram produced by the simulation.

Figure 2: HR diagram showing the two populations of white dwarfs evolving down the cooling sequence. Each second corresponds to 1 Gyr. Figure from author’s website, similar to Figure 4 in the paper.

The authors propose that 22Ne settling could be the source of the cooling delay. Since the gravity of white dwarfs is so strong heavily elements sink toward the core, releasing gravitational energy in the process. This energy release slows cooling. The authors calculate that the temperature regime where this settling occurs, shown in Figure 3, matches the position and shape of the Q branch. The delay length is also roughly consistent with the amount of energy that would be released, although more work is needed here. 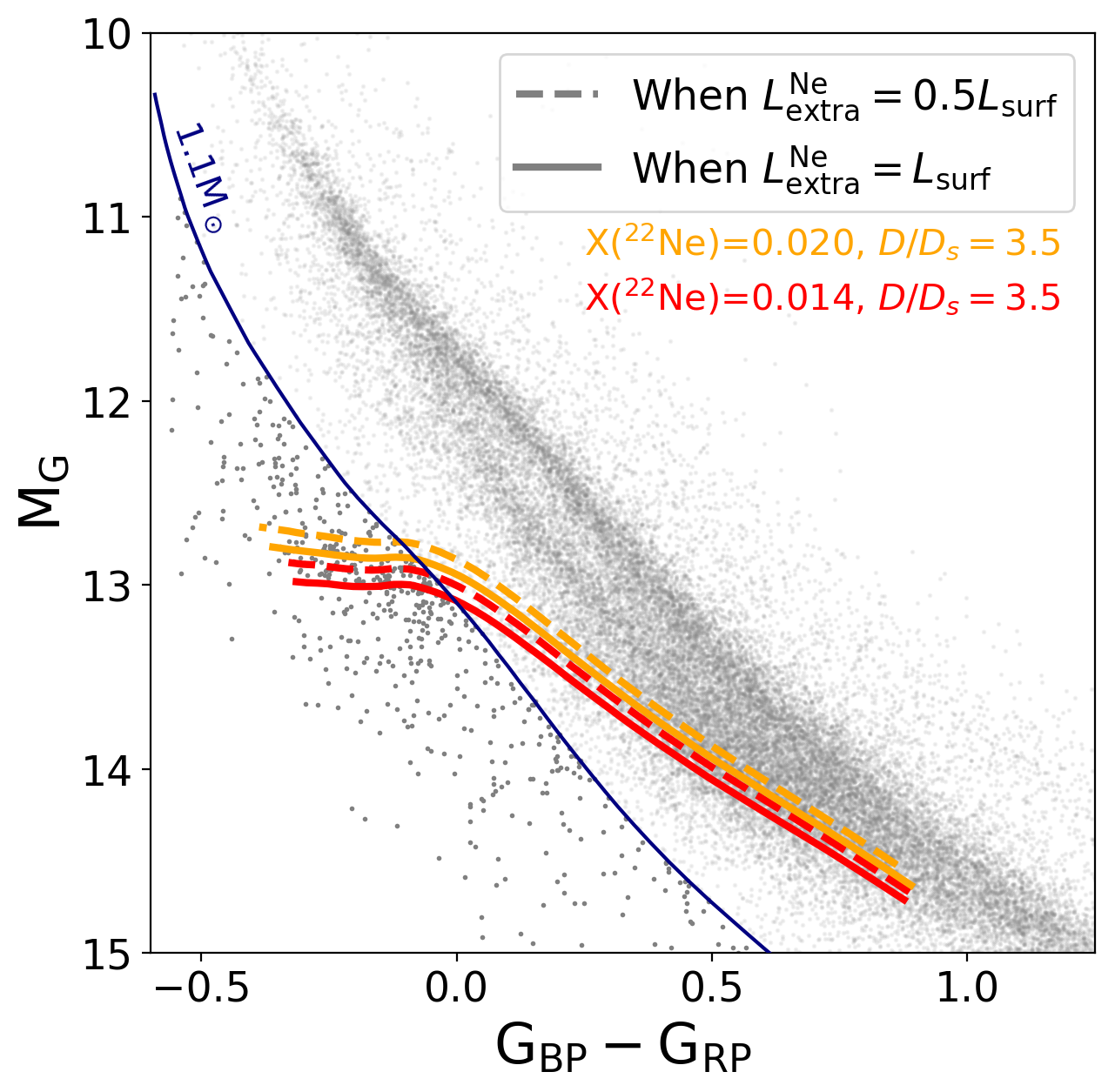 Figure 3: The effective zone of 22Ne settling for two different abundances of 22Ne. The cooling delay happens when the luminosity of 22Ne settling is similar to the surface luminosity. This region is narrow and matches the position and shape of the Q branch quite well. Figure 8 in the paper.

While the author’s statistical cooling delay model can replicate the observations, more work must be done to confirm if the proposed physical mechanism, 22Ne settling, is the true cause of the cooling delay. Specifically this process must be incorporated into cooling models of massive white dwarfs. Gaia’s precision measurements and extremely large sample size continue to raise interesting questions, and help us answer them. The bunch-up of white dwarfs examined in this paper would not be visible in a smaller or noisier sample of stars, demonstrating the wealth of knowledge that Gaia is capable of unlocking after only about half of its mission.