Unless you’ve been avoiding the internet for fear of Avengers spoilers, you may have noticed that everyone’s favourite star-tracker, Gaia, has recently released its second catalogue containing the precise location of around 1.7 billion stars in our own galaxy and beyond. 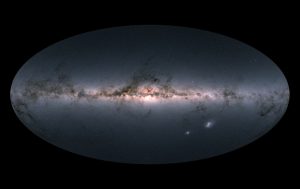 Until now, we only had access to around 250 white dwarf stars in our local galaxy, making it difficult to look for common properties and understand the population as a whole. But, thanks to Gaia, today’s authors had a sample of almost 14,000 white dwarf stars to play with – here’s what they discovered.

Ambitious in its ultimate goal, ESA’s Gaia space telescope aims to make the ultimate 3-dimensional map of our Milky Way from observing a small fraction (~1%) of its constituent stars. 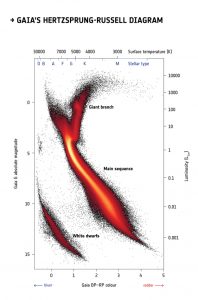 Figure 2: Gaia’s Hertzsprung-Russell diagram which groups stars via their brightness and colour into distinct regimes. Whereas most of the stars we observe sit on the so-called main sequence, today we’re interested in the stars which sit to the lower left of the diagram – the white dwarfs. Credit: ESA/Gaia/DPAC

Throughout its five-year mission, Gaia is carefully monitoring the precise position of over a billion stars, whilst also having the photometric capabilities to determine the brightness of a star as a function of colour. This is important as the colour of a star informs astronomers its age and temperature. Devised in the early 20th century, this colour-magnitude information is often summarised in a Hertzsprung-Russell diagram which is shown in Figure 2.

Alongside regions like the main sequence, where most ordinary stars like our Sun sit, and the giant branch, containing (yes, you guessed it) the giant stars; we have a smaller population of stars known as white dwarfs. A white dwarf is a dense stellar core which is left behind when a  medium-mass star, between 0.5-8 times the mass of the Sun, ends its life.

The Hertzsprung-Russell diagram summarising the new Gaia data is particularly exciting for white dwarf enthusiasts everywhere because it is direct evidence for something not previously observed – two distinct populations of white dwarfs. Such grouping is known as bifurcation and is clearly evident in Figure 2 (if you open up the picture in a new window and zoom in). However, the authors have gone further than just pointing this out, they’ve recreated it using models.

To determine what is causing bifurcation in the white dwarf population of the Milky Way, the authors designed a population of stars given a variety of parameters, including: 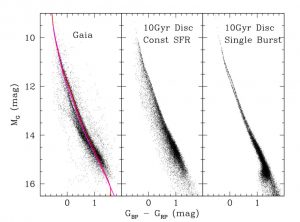 Figure 3: The observed (left panel) and simulated colour-magnitude diagrams created to verify if the atmosphere being hydrogen or helium-rich was responsible for bifurcation. TL:DR – it’s not. Figure 3 from paper.

Dubbed the Gaia model, the authors derive the mass distribution of a subset of their 14,000 white dwarfs using the Gaia data to predict what colour the white dwarfs should be if observed by the Sloan Digital Sky Survey (SDSS). A second model, called the disc model, is formed from the synthetic white dwarf created earlier. To look for similarities between the Gaia and disc model in real SDSS data, the authors randomly sample each data set and create another colour-magnitude plot. 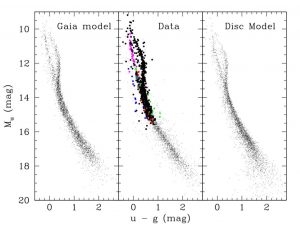 What is clear from Figure 4 is that the data and model match up really well, and bifurcation can be explained by white dwarfs having different masses…but why haven’t we observed this before now in our SDSS data? There are several reasons, but the first stems from the fact due to large errors in the SDSS survey, we did not have precise enough photometry to see mass bifurcation predicted by the Gaia model. 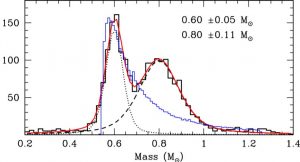 Figure 5: The mass distribution of the Gaia white dwarfs – there are clearly two groups of white dwarfs here. The red line indicates the best fit data required to estimate what the SDSS magnitude should be. The bottom half of Figure 5 from paper.

So, it’s been exactly a month since the second Gaia catalogue was released and we have already learned a tremendous amount about a small population of stars within our galaxy, by increasing our white dwarf catalogue from 250 objects to almost 14,000. With its unique and extensive data set, it’s hard to predict what astronomers will uncover next, but clearly, the Gaia dataset will be revealing the secrets of the (local) universe for years to come.