There have been many simulations over the last 35 years of white dwarfs merging as astronomers try to figure out the conditions that cause each of these outcomes. However, none of these simulations have included magnetic fields during the merging process, though it is well known that many white dwarfs have magnetic fields.. This is mostly because other astronomers have just been interested in different properties and results of mergers. Today’s paper simulates the merging of two white dwarfs with magnetic fields to see how these fields change and influence the merger.

The authors choose to simulate the merger of two fairly typical white dwarfs. They have Carbon-Oxygen cores and 0.625 and 0.65 solar masses. The magnetic fields in the core are 2 x 107 Gauss and 103 Gauss at the surface. Recall that the Earth has a magnetic field strength of about 0.5 Gauss. The temperature on the surface of each white dwarf is 5,000,000 K. The authors start the white dwarfs close to each other (about 2 x 109 cm apart and a period of 49.5 seconds) to simulate the merger.

To keep track of what is happening, the authors use a code called AREPO. AREPO works as a moving mesh code – the highest resolution is kept where interesting things are happening. There have been a number of past Astrobites that have covered how AREPO works and some of the applications to planetary disks and galaxy evolution. 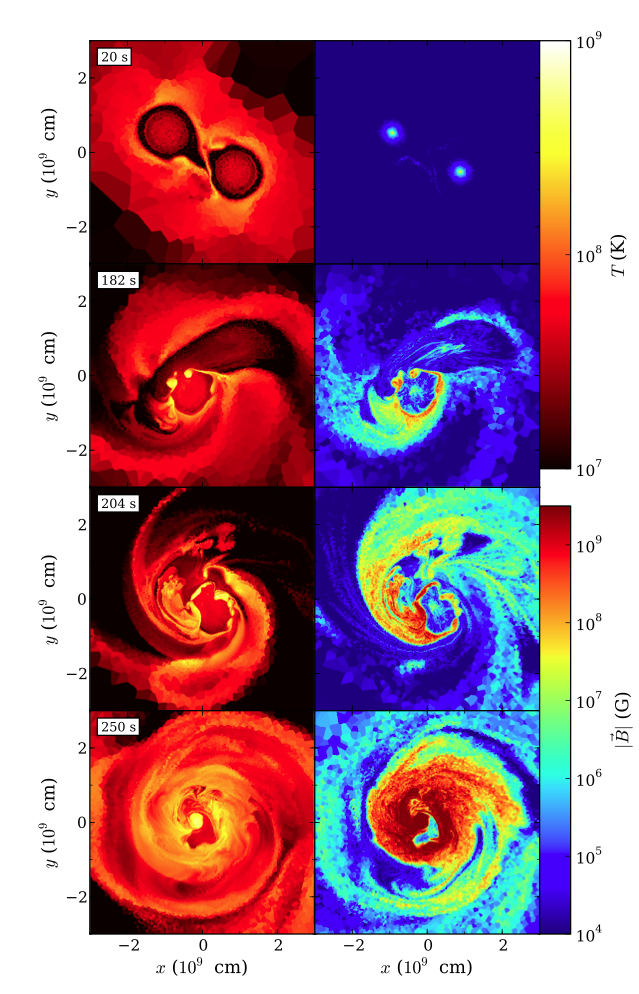 Figure 1: Result from the simulation showing how the temperature (left) and magnetic field strength (right) change over time (top to bottom). We are looking down on the merger from above.

Figure 1 shows the main result from the paper. The left column is the temperature and the right column in the magnetic field strength at various times during the simulation. By 20 seconds, just a little mass is starting to transfer between the two white dwarfs.  Around 180 seconds, tidal forces finally tear the less massive white dwarf apart. Streams of material are wrapping around the system. These streams form Kelvin-Helmholtz instabilities that amplify the magnetic field. Note how in the second row of Figure 1, the streams with the highest temperatures also correspond to the largest magnetic field strengths. The strength of the magnetic field is changing quickly and increasing during this process. By 250 seconds, many of the streams have merged into a disk around the remaining white dwarf.

By 400 seconds (not shown in the figure), the simulations show a dense core surrounded by a hot envelope. A disk of material surrounds this white dwarf. The magnetic field structure is complex. In the core, the field strength is around 1010 Gauss, significantly stronger than at the start of the simulation. The field strength is about 109 Gauss at the interface of the hot envelope and the disk. The total magnetic energy grows by a factor of 109 from the start of the simulation to the end.

These results indicate that most of the magnetic field growth occurs from the Kelvin-Helmholtz instabilities during the merger. The field strength increases slowly at first, then very rapidly before plateauing out. The majority of the field growth occurs during the tidal disruption phase (between about 100 and 200 seconds in the simulation). Since accretion streams are a common feature of white dwarf mergers, these strong magnetic fields should be created in most white dwarf mergers. As this paper is the first to simulate the merging of two white dwarfs with magnetic fields, future work should continue to refine our understanding of this process and observational implications.

Exploding stars and sleight of hand: A case of magnetic misdirection