The Magnetic Personalities Of Dead Stars

The galaxy is littered with white dwarfs, the burnt out remnants of stars that have run out of hydrogen fuel in their cores, but were too small to explode as supernovae. But far from being lifeless orbs, around a tenth of white dwarfs have powerful magnetic fields, a million times stronger than that of the Sun. How did these magnetic white dwarfs become such strong magnets? And just how many are there? Hollands et al. set out to answer the second of these questions, in the hope that it will shed light on the first.

By far the easiest way to find magnetic fields in white dwarfs is to look at the absorption lines in their spectra. Normally, the light absorbed by an element at a certain wavelength is seen as a single, thin line. However, if the white dwarf is magnetic, then a process called the Zeeman Effect splits the line into three. The further the outer two lines are from the central, original absorption line, the stronger the field. This offers a simple way to both find magnetic white dwarfs and to measure their field strengths. 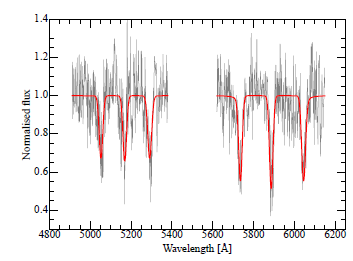 Figure 4 of the paper, showing absorption lines of magnesium and sodium in one of the newly discovered magnetic white dwarfs. The three lines reveal the presence of a magnetic field—if there were no magnetics, only the central line would be present. The red line shows the model used to calculate the strength of the magnetic field.

But as white dwarfs get older, they cool down, and the helium absorption lines in their spectra disappear as the atoms fall to their ground state. This hides the magnetic field, preventing us from knowing the magnetic behaviour of white dwarfs over their entire age range. Fortunately, a large fraction of these white dwarfs also have planetary systems. Asteroids and other planetesimals often fall onto the white dwarfs, producing the absorption lines needed to reveal their ancient magnetic fields. White dwarfs like that are known as DZs, Degenerate objects that have elements with a high atomic number (Z) in their atmospheres.

The authors used the huge Sloan Digital Sky Survey (SDSS), filtering down the thousands of objects observed to find 79 DZ. Of these, 10 of them were found to be magnetic, 7 of which no one had spotted before. Their magnetic fields were huge: up to 9.59 MegaGauss (nearly 1000 Tesla). For comparison, the large magnets used in MRI machines generate around 3 Tesla.  The authors found that this implied that roughly 13 percent of DZ white dwarfs were magnetic. However Hollands et al. point out that there are many biases involved, such as the difficulty in seeing dim objects, or in spotting weak magnetic fields in spectra with low signal to noise, as well as the uncertainty over the geometry of the magnetic fields. Accounting for all of these biases could lead to an even higher occurrence rate.

With this in mind, Hollands et al. then tried to answer the question of where the magnetic fields came from. The simplest explanation is that they were there from the start, left over from when the white dwarfs were stars. The progenitors of the magnetic white dwarfs could have been the curious Ap/Bp stars, which have much stronger magnetic fields that most stars at around a few KiloGauss. As they shrunk down into white dwarfs, conservation forces would have ramped up the field to the required MegaGauss levels. Unfortunately there aren’t enough Ap/Bp stars to account for the high occurrence rate of magnetic DZ. Nor does this explain why they found many more magnetic DZ  compared to other types of white dwarf.

Thanks to these flaws in all of the potential explanations, the authors are forced to leave the question of how the magnetic white dwarfs formed unanswered. They finish by pointing out that the next set of results from the SDSS is on its way, promising to provide many more of the mysterious magnetic white dwarfs to investigate.