A song of ice and carbon

Although Saturn’s largest moon, Titan, is expected to have an icy composition, unambiguous detection of H2O ice on its surface has been less than straightforward. Titan inspires great intrigue given its Earth-like landforms, including lakes, rivers, sand dunes, mountains, and possibly volcanoes. However, these features occur at frigid temperatures (~94 K) and have very different compositions than their terrestrial counterparts. Whereas Earth has water flowing over a silicate rock surface, Titan has liquid methane and ethane flowing over a surface that likely includes both ice and carbon-bearing organic compounds.

So where is the H2O? Based on Titan’s low density (1.88 g/cm3), it is thought to be made up of H2O around a wet, rocky core. In a popular model of its interior, Titan has differentiated, or organized into layers, such that the H2O layer includes an upper crust of “normal” H2O ice (like you have in your freezer) and a lower layer of totally weird, higher-density H2O ice (like you have in your ultra-pressurized freezer) with a liquid water ocean sandwiched between the two (see Figure 1). Titan is thus among the many outer solar system moons considered “ocean worlds.” Despite this likely water-rich composition, innovative methods have been necessary to definitively detect H2O ice on its surface via spectral measurements. 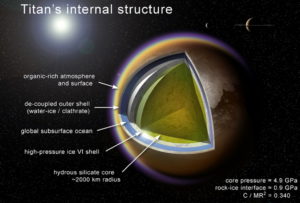 Understanding Titan’s surface has been a unique challenge for a few reasons. Titan is somewhat unusual compared to other icy worlds in that it bears an atmosphere more massive than even the Earth’s. Hydrocarbons like methane condense in this atmosphere and rain across the surface, transporting sediment and supplying lakes at the poles. In the upper atmosphere, methane is zapped by solar radiation and reassembled into complex organic molecules that can then “snow” upon the surface, potentially burying and obscuring water ice-rich materials. In addition to this complication, surface compositions have generally been difficult to identify since the thick atmosphere provides “windows” only at specific and narrow wavelength bands (see Figure 2). As a consequence, the prevalence of H2O ice and its relationship to diverse organic compositions has been difficult to assess. 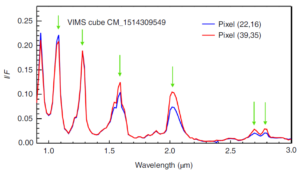 The authors address this issue by isolating a few specific trends and focusing on otherwise weak signals. NASA’s Cassini mission orbited Saturn from 2004 to 2017 and collected reflectance spectra of Titan during many flybys with its Visual and Infrared Mapping Spectrometer (VIMS) instrument. These spectra generally include significant atmospheric effects that can be removed by assuming the atmosphere’s composition (and applying radiative transfer models). Another approach involves putting many raw measurements into a Principal Component Analysis (PCA)—a method previously used for interpreting VIMS data. PCA can reduce a lot of data with many variables by determining the “principal components” that explain variation in a dataset. Sequentially, each principal component (PC#) explains less and less variance, from PC1, to PC2 and so on. Because PCA makes no assumptions about the surface or atmosphere, the first component (containing >85% of the variance) identifies the obvious surface and atmospheric trends that these authors were not interested in.

The authors performed this PCA on 37 VIMS images, focused on 4 wavelengths (two with H2O absorptions and two without). The analysis was limited to latitudes <30° from the equator where the atmosphere is better characterized, allowing for comparison between the PCA result and prior studies based on radiative transfer models that estimate the atmosphere’s effect.

Ignoring the first principal component, which was mainly indicative of atmospheric composition and complex organic sediments, the authors explore the second component (explaining 0.4-13% of the variance). This component was dominated by absorption features that could be used to distinguish water ice-rich versus ice-poor terrains. The H2O-rich terrains are distributed unevenly, but not randomly, across Titan, including a “corridor” of ice-rich material 6,300 km long (see Figure 3). Although the cause of this feature is unclear, hypotheses include sedimentary, volcanic, and tectonic origins. The authors mainly focus on detection of H2O ice, but the second principal component also suggests diverse organic compositions elsewhere on Titan.

Figure 3: Map of Titan between 60°N and S with blue regions indicating ice-rich compositions, including the “corridor” (from about 30° E, 15° N to 120° W, 30° S), and other colors indicating ice-poor regions with diverse organic compositions. Figure 2 in today’s paper.

It is noted that ice-rich regions may indicate aeolian and fluvial (wind- and fluid-driven) activity. The water ice-rich crust could become exposed where these erosive processes occur at a more rapid timescale than organic sedimentation from the atmosphere. Along parts of the so-called corridor, icy materials may erode from nearby cliffs and transport to lowlands. Interestingly, at one end of the corridor lies Doom Mons, one of the highest mountains detected on Titan at 500 m, situated next to Sotra Patera, a 1500 m deep pit hypothesized by some to be cryovolcanic in origin. The corridor’s linear shape could also suggest global tectonic processes, but Titan is unlikely to be presently active in this manner. Beyond the corridor, other ice-enhanced regions include possible crater ejecta (see Figure 4), though compositions are likely mixed as the related spectral features are found in the third principal component (representing just 0.75% of the variance).

Figure 4: Selk Crater and its bright ejecta seen in a radiative transfer-based image (left) and with PCA-based compositions of ice-rich in blue and ice-poor in green (right). Figure 5 in today’s paper.

Remaining questions and an exciting answer

To test possible formation hypotheses for the corridor, the authors check for correlations with gravity anomalies or topography, but none are observed—possibly due to low resolution. Thankfully, the issue of composition on Titan will be thoroughly investigated in the “near” future thanks to NASA’s selection of the Dragonfly mission. To give you a brief scoop, Dragonfly is a nuclear-powered, couch-sized, dual-quadcopter (!!!) that will land near Titan’s equator to study this alien world’s chemical composition, surface conditions, and subsurface structure. Owing to Titan’s thick atmosphere, the craft will make flights of several kilometers at a time, hopping its way over vast sand dunes, ultimately toward ice-rich Selk Crater (see Figure 4). On its traverse, Dragonfly will address a multitude of questions, including the composition of Titan’s sands and possibly the source of ice-rich surface features such as those detected by the authors in today’s paper. I for one, will be at the edge of my seat until the 2034 landing date!