Titan, Saturn’s largest moon, is the only solar system object other than the Earth to have a thick atmosphere and standing surface liquid. When the Cassini spacecraft began observing Titan, it even discovered lakes and seas dotting the northern hemisphere. Don’t fire up your rocket just yet, though—because Titan is so cold, the lakes and seas are filled with liquid methane and ethane rather than water.

Titan’s thick, methane-rich atmosphere makes it difficult to observe the surface at visible wavelengths. Luckily, there are several windows in the near-infrared through which light can pass and reveal the surface. Seven of these windows overlap with the wavelength range covered by Cassini’s Visual and Infrared Mapping Spectrometer (VIMS). By looking at how the brightness of the surface changes with wavelength, we can learn about the composition of the surface material. Figure 1 depicts a three-color map of Titan’s surface made with VIMS. The pinkish regions show where the surface reflects strongly at 5 microns. 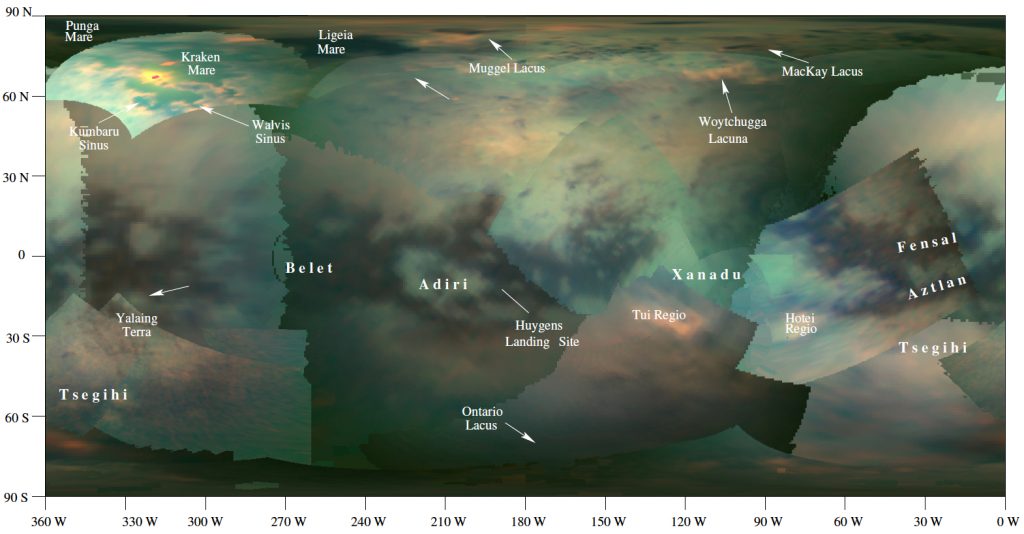 Figure 1. Map of Titan’s surface from Cassini. Red is 5 microns, green is 2 microns, and blue is 1.3 microns. Many of the major geographic regions are labeled. Some of the regions selected for this study are indicated with the white arrows.

The 5-micron-bright regions are found circling lakes in the northern hemisphere, in dry lake beds in both hemispheres, and in the desert-like equatorial regions. The bright rings around the lakes are believed to be evaporites—solid material left behind after the liquid it was dissolved in evaporates. This explains the presence of the bright material surrounding the lakes and the dry lake beds, but what about the desert? Linking 5-micron-bright regions in what is today a desert to the bright rings around the lakes could provide evidence that the equatorial regions of Titan were once covered with liquid.

In this paper, the authors searched for a compositional link between the bright regions in the desert and the evaporites around the lakes and seas. They used an absorption feature at 4.92 microns in order to investigate whether or not the 5-micron-bright material in each of these regions is the same. The 4.92-micron absorption feature has been observed previously in the desert region, but no one has been able to definitively say what compound causes it. Because of this, finding the same feature in the desert and around the lakes can indicate that the regions are geologically similar, but can’t yet tell us about the chemical makeup of the material.

The authors used Principal Component Analysis (PCA) to isolate the weak 4.92-micron absorption feature. PCA is a mathematical method that separates the individual components that make up an observed signal. In this case, the main contributors to the signal (i.e. the “principal components”) could be changes in the surface reflectivity, instrumental noise, or compositional variations. Once the components have been separated, the unwanted contributors can be removed. As a result, PCA can be used to isolate a signal that is much smaller than the background noise. (PCA is also used in the direct detection of exoplanets and is described in more detail here.) After applying PCA, the authors observed the 4.92-micron absorption feature in both the desert and around the lakes, strengthening the hypothesis that the desert once had liquid. However, they also found that not all of the lake regions had the absorption feature, and some of the regions that did have it didn’t have it in every observation. They suggested that material with a crystalline structure that reflects light more strongly at some angles or transient effects like methane rain could cause the absorption feature to appear intermittently.

Although the authors posit many explanations for the mysterious behavior of the 4.92-micron absorption feature, they can’t yet settle on one cause. It’s not surprising that Titan, an inhospitable but strangely familiar world with complex geology and weather systems, presents a challenge to astronomers. In the future, by modeling how Titan’s climate changes over time, we can hope to learn more about what causes the distribution of evaporites on Titan’s surface.