Orbiting the awe inspiring ring-planet Saturn, the Cassini spacecraft continues to uncover the secrets of its host and its neighbouring moons. Saturn’s sixth moon, Titan, is the second largest moon in our Solar System and is probably one of the most diverse ones. Due to its unique atmosphere – it’s the only moon to have one – its surface is also home to the only extra-terrestrial source of stable liquid that we know of. Recently, scientists have observed peculiar features present on the surfaces of these vast lakes of methane. It is these oddities and the simulations designed to explain them which are the subject of today’s astrobite. 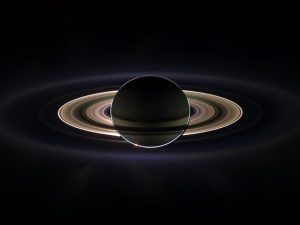 It was back in the 1980s when Voyager 1 and 2’s observations of Titan’s atmosphere suggested that it had the correct temperature and constituents to support liquid hydrocarbons on its surface. Further evidence came 15 years later in the era of the Hubble Space telescope, but it was not until observations undertaken by the RAdio Detection And Ranging (RADAR) instrument aboard Cassini that this hypothesis was confirmed. 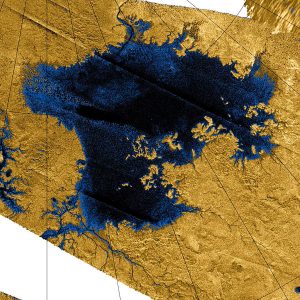 Short bursts of RADAR over-brightness have been detected in two separate locations on Titan’s northern sea, Ligeia Mare. One theory behind these mysterious bright spots is the formation of gas bubbles and suspended solids on the lake’s surface. Therefore scientists have been focusing on how to simulate this sort of behaviour by considering Titan’s environment and the phase of the molecules in the lake (i.e whether it’s a gas, liquid or solid).

What do we know about the surface conditions?

Using a different instrument aboard Cassini, the Composite Infrared Spectrometer (CIRS), the atmospheric temperature as a function of latitude was measured. An infrared spectrometer is useful for determining the composition of atmospheres, as the infrared light emitted from Titan’s surface causes bonds in several organic molecules like methane to vibrate, leading to a characteristic absorption feature in spectra obtained by the spectrometer. This spectrum is also indicative of Titan’s temperature and for a northern region in spring it was found to be 91K. To calculate the lake’s temperature from this information is tricky as we need to understand poorly constrained properties such as how well light is absorbed in the lake.  Thankfully we have trusty numerical models and these yield a temperature range in the region of 80 – 90K.

Hitching a ride with Cassini, the Huygens 1.3m probe inhabits Titan and remains the most distant landing of any human-made object. After its decent in 2005, Huygens measured Titan’s ground pressure and found it to be only 1.5 times greater than that of Earth’s (1 bar). However in order to form bubbles on Titan, we need to know the depth and pressure of Ligeia Mare. Measurements of depth are relatively easy with RADAR, which determined the depth of this lake to be between 100-200m, but pressure is more challenging and requires clever simulations. We know Ligeia Mare is composed of liquid and vapour methane, ethane and nitrogen, therefore scientists considered a variety of mixtures in order to calculate a range of pressures for the measured depths. For example, if the lake was purely composed of methane it would have a pressure of 2.1 bar for 100m, and 2.7 bar for 200m. From this work the authors concluded the pressure in the lake to be between 2 – 3.5 bar.

How stable is the lake?

Stability of a mixture indicates if the mixture is going to separate into its different constituents as the temperature and pressure of the system changes. Investigations into stability of similar liquid-liquid-vapour samples on Earth have only been conducted at higher temperatures and pressures, meaning the team had to rely on simulations for this work. For a nitrogen-methane mixture at the surface of the lake, the amount of nitrogen can change and the mixture remains in either its vapour or a liquid-vapour state – it doesn’t demix. This was true for a variety of mixtures investigated which suggests that given the expected ground conditions for Titan, the lake’s surface should not split up into two liquids. 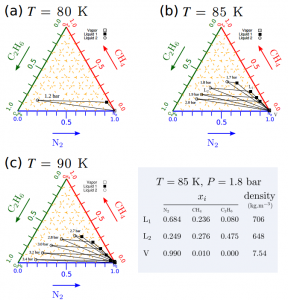 Figure 3: Each shape indicates the fraction of molecule present when the mixture separates into its individual components. The grey box states the values for a temperature of 85K where in the first liquid to separate out is 68.4% nitrogen, 23.6% methane and 8% ethane. (Figure 1 of the paper)

Next the scientists investigated what happens below the surface and found that demixing could occur where the pressure is higher at depths between 130 – 170m if the lake is at a temperature of 90K. However at lower temperatures demixing will occurs at a much shallower depth of around 20 – 30m, highlighting a strong temperature dependence. The dependency on depth is highlighted in figure 3 as at lower temperatures, conditions for demixing require a lower pressure which translates to it occuring at shallower depths.

What does this mean for Titan?

Demixing is key to this bubbly hypothesis. Bubbles of gas are unlikely to form if the mixture is homogeneous, therefore the team propose a lake with an ethane-rich bottom and methane-heavy top. They go on to suggest a cycle where the methane and nitrogen enriched liquid sinks towards the deep ethane layers satisfying the temperature and pressures requirements for demixing. The surface of the lake is also in contact with a rich, mostly nitrogen atmosphere meaning the top of the lake is nitrogen-rich. Clearly as the bubbles of ethane and nitrogen travel, the demixing conditions are no longer satisfied, leading to mixing. Luckily for nitrogen, the buoyancy of the bubbles drives them rapidly towards an almost pure nitrogen surface, meaning they do not redissolve in the surrounding liquid. Resulting bubbles are around a few cms in size and are therefore detectable by Cassini.  Scientists believe this cycle is the most likely scenario, and it’s further supported by the location of the bright spots on RADAR corresponding to areas of the lake with a depth greater than 100m.

With its own atmosphere and lakes, Titan is clearly a moon ideal for future surface exploration, however nitrogen bubbling in the deepest part of Titan’s seas pose a great threat for any visitors. The team require efforts to be focused on re-creating similar conditions on Earth, as these investigations will further validate and confirm current models being used by the team. There are still large gaps in the model which need to be addressed such as oceanic circulation, full treatment of the chemical composition and sea bed topography. Like the authors say, “the last word will come from Titan’s submarine exploration”.