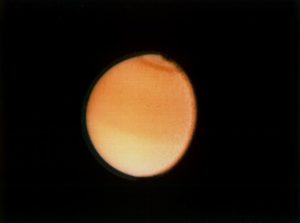 Figure 1: Image of Titan taken by the Voyager spacecraft as it flew by. While cloud and haze features are evident, nothing of the surface could be viewed. (Credit: NASA)

Before the Cassini satellite began touring the Saturn system, very little was known about Titan (one of Saturn’s many moons). When Voyager flew past Titan in 1981 on its way out of the Solar System, it sent back an image of a brownish yellow ball of haze (see Figure 1). For the next 24 years we were left with the nagging question: What could possibly lurk on Titan’s surface, hidden from view by its thick atmosphere?

This question was answered in 2004 when Cassini, equipped with multi-wavelength instruments, arrived at the Saturn system. By using different wavelengths, we were able to image different layers of Titan’s atmosphere, and at certain wavelengths, we could even observe its surface. In doing so, we discovered that Titan is actually fairly similar in some respects to Earth albeit with a chilly surface temperature of less than 100K. One notable similarity is the methane cycle on Titan is almost equivalent to the hydrological cycle on Earth. Astronomers observed huge methane storms in the atmosphere, liquid methane lakes near the poles and an arid region of dune fields probably made out of some type of frozen methane or other hydrocarbon “sand” surrounding Titan’s equator. These dune fields are the subject of today’s paper as the authors noted that an unusual bright spot appeared in this region three times during Cassini’s 13 year visit.

The dates corresponding to these mysterious bright spots occurred during the Cassini flybys of June 7, 2009, January 12, 2010 and June 21, 2010. Figure 2 shows several images of Titan taken by the Visual and Infrared Mapping Spectrometer (VIMS) onboard Cassini. The different colors represent different wavelengths with red being the average intensity falling between wavelengths of 5 and 5.07 microns and green being the average intensity between 2 and 2.78 microns. The bright spot location is represented by an arrow and tends to appear pinkish in this color scheme. 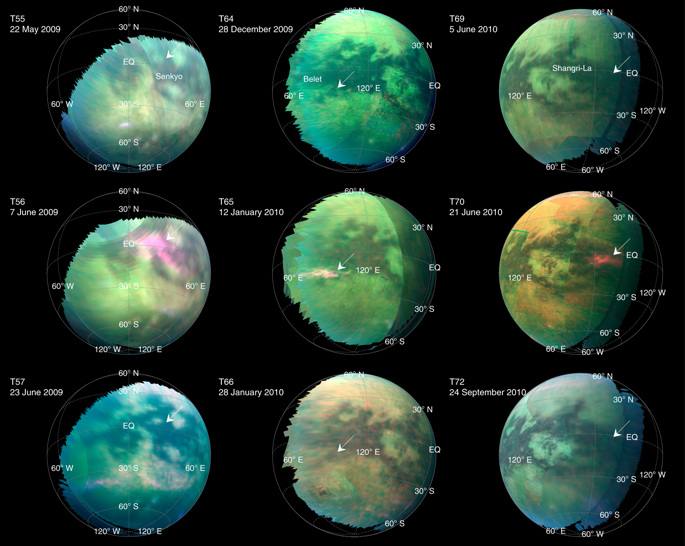 Figure 2: Images of Titan taken by the VIMS instrument during different flybys. Colors represent different intensities between different wavelengths with red being the average between 5 and 5.07 microns and green is between 2 and 2.78 microns. The bright spot near the dune fields is pointed out by a white arrow and appears pinkish compared to the surrounding dark dunes on the surface. (Figure 1 in today’s paper)

These three brightening events lasted for the full 11-14 hours of the Cassini flyby of Titan. However, Cassini was a busy spacecraft and couldn’t stay to monitor the full time of these events, and they were gone when Cassini made another flyby 4-5 Earth weeks later (corresponding to less than 3 Titan days). What is interesting is the timing of these events. All three events occurred during Titan’s equinox, when the Sun was directly overhead of the equator. As it takes Titan (and Saturn) about 30 years to orbit the Sun, the equinox lasts for many Earth years with all three events occurring during a single equinox on Titan. Whatever this brightening event is, the authors suggest that it is somehow correlated to the solar heating of this region.

Cloudy With a Chance of Methane?

Bright spots in the VIMS images are not uncommon. Large methane clouds correlated with the methane storms on Titan appear bright in both infrared and optical wavelengths and a few of these storms have even been observed in the equatorial region, albeit they remain rare. However, after discovering these brightening events dimmed and disappeared at wavelengths less than 1.6 microns, the authors ruled out the possibility of a methane cloud. This dismissal was also supported when the authors used atmospheric models to determine the altitude of this object. They concluded that the brightening events must occur at an altitude below 14 km, much lower than most methane clouds observed. Furthermore, by approximating the relative humidity of Titan and the convective nature of a cloud, the authors calculate that a methane cloud-top should reach a minimum altitude of 25km. Therefore, whatever is causing this brightening event, it is not a typical methane cloud.

Infrared wavelengths can also be a good tracer for temperatures, with a bright spot potentially representing a hot spot. The authors investigate the hypothesis that this brightening event is actually correlated with some type of hot lava seeping out of a cryovolcano. However, a comparison of the surface before and immediately after the brightening event showed that the surface temperature remained the same. They conclude that it would be difficult for the cryolava (an awesome sounding word for ice lava) to cool back to the average temperature of the surface before Cassini flew by again. As neat as cryovolcanism sounds, it isn’t the cause of these bright spots.

The authors propose the theory that Titan, like Earth and Mars, is susceptible to dust storms in areas that are arid. And just like on Earth and Mars, dune fields seem to occur in arid regions! The difference is that Titan’s “dust” would be composed of some type of fine, micrometer-sized organic (tholin) particles which would be easy to loft with minimal wind speed. In fact, when the Huygens probe landed on Titan, it detected a very thin layer of a soft fine material. This material could be the culprit! The authors expand their atmospheric models to simulate different wind speeds and different particle sizes, and were successful in creating a dust cloud that matched the signature they observed in the VIMS images (see Figure 3). However, the winds required to loft and suspend these particles in the atmosphere for a substantial amount of time need to be stronger (several m/s to 10s of m/s) than the typical wind speeds observed on Titan. The authors propose that these winds could be achieved at the onset of a methane storm. This process is similar to the onset of some storms on Earth, where the pressure drops, the temperature becomes cooler, and the wind picks up. As only a few large equatorial storms have been observed, all falling near the equinox of Titan, this could explain why these dust storms are so rare. One problem with this theory is that no methane storms appear around the same time as these dust storms, though this may in part be due to Cassini’s limited observation time during a flyby. Regardless, the authors point out that if the dust storm theory holds, it would mean Titan joins the ranks of Earth and Mars as the only Solar System objects to have an active aeolian process. 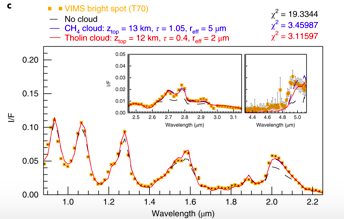 Figure 3: The brightness of one of the three events as a function of wavelength. The actual data is plotted in yellow with three different atmospheric models plotted for comparison. The black line assumes no cloud, blue assumes a methane cloud with a top altitude of 13km, and the red assumes an organic dust cloud at an altitude of 12km. While the best-fit model is the red “tholin cloud” model, the authors do not rule out the possibility of a methane cloud based on this fit. They argue, however, that no methane cloud could exist at such a low altitude making the blue model unphysical. (Figure 3 part c in today’s paper)

After touring the Saturn system for nearly 20 years, the Cassini spacecraft made its final plunge into Saturn’s atmosphere in September 2017. However, its legacy lives on, as demonstrated by today’s paper. Data taken years ago by Cassini continues to be analyzed and re-analyzed leading to surprises, new discoveries, and new mysteries about Saturn and its moons. Dust storms were discovered by looking at images taken 8 years ago, who knows what the next batch of archival images will tell us!