There is about five times more invisible “dark matter” than its luminous counterpart in the universe—but how do we go about detecting something that can’t be directly imaged? One way is to look for the gravitational effects of dark matter clumps on images of normal matter along the same line of sight. This type of effect is called gravitational lensing. In today’s paper, the authors specifically look for the effects of weak lensing from low-mass structures consisting entirely of dark matter. The foreground dark matter structure creates a lens that bends the light coming towards an observer from some background luminous source. Unlike strong lensing, weak lensing doesn’t impact a single background source, but instead serves to preferentially align several background sources along some field. For more information on different types of lensing and how they work, check out this bite.

Why Use Weak Lensing?

Alignments of foreground and background sources that lead to weak lensing are much more common than those leading to strong lensing. Because low-mass dark matter structures are predicted to exist in the Milky Way, they should be both common in observational data sets and detectable through microlensing signatures. Furthermore, because such structures are completely devoid of normal matter, they pose a “pristine testing ground” for probing the microphysics of dark matter without the interference of normal, luminous matter.

How to Look For Weak Lensing? 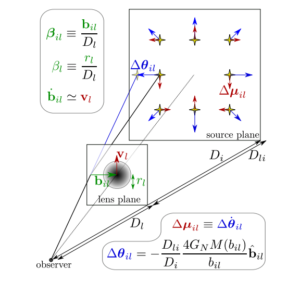 Figure 1: Diagram of gravitational lensing of sources i by lens l. Note the blue monopole pattern of the angular displacement

.  This is not constant in time, leading to the red dipole pattern lensing corrections

to the sources’ proper motions

. This dipole pattern is universal, and is what the authors look for. Figure 1 in the paper.

The authors use a template approach, which is similar to the one used when detecting astrophysical signals with LIGO. Figure 1 shows the dipole pattern of velocity corrections of background stars which stems from weak lensing. The exact shape and size of the template depend on the angular position

Where to Look For Weak Lensing?

The researchers looked to the Milky Way to provide the dark matter lenses, and extra-galactically to the Large and Small Magellanic Clouds (LMC, SMC) to provide the luminous matter to be lensed. They used the second data release from Gaia and chose the LMC and SMC data for their large stellar number densities and low proper motion dispersions, both intrinsic and instrumental. This left the authors with a high signal-to-noise ratio, thus best equipping them to look for signatures of weak lensing.

In order to look for the tell-tale dipole template motion, the authors cleaned the data up a bit. First, they subtracted overdense stellar clusters, as they generally move coherently and independently from the bulk stars in the Magellanic Clouds. Additionally, they subtracted the large-scale proper motion of the clouds themselves. Finally, they removed stars which are in the line of sight, but not bound to the clouds. 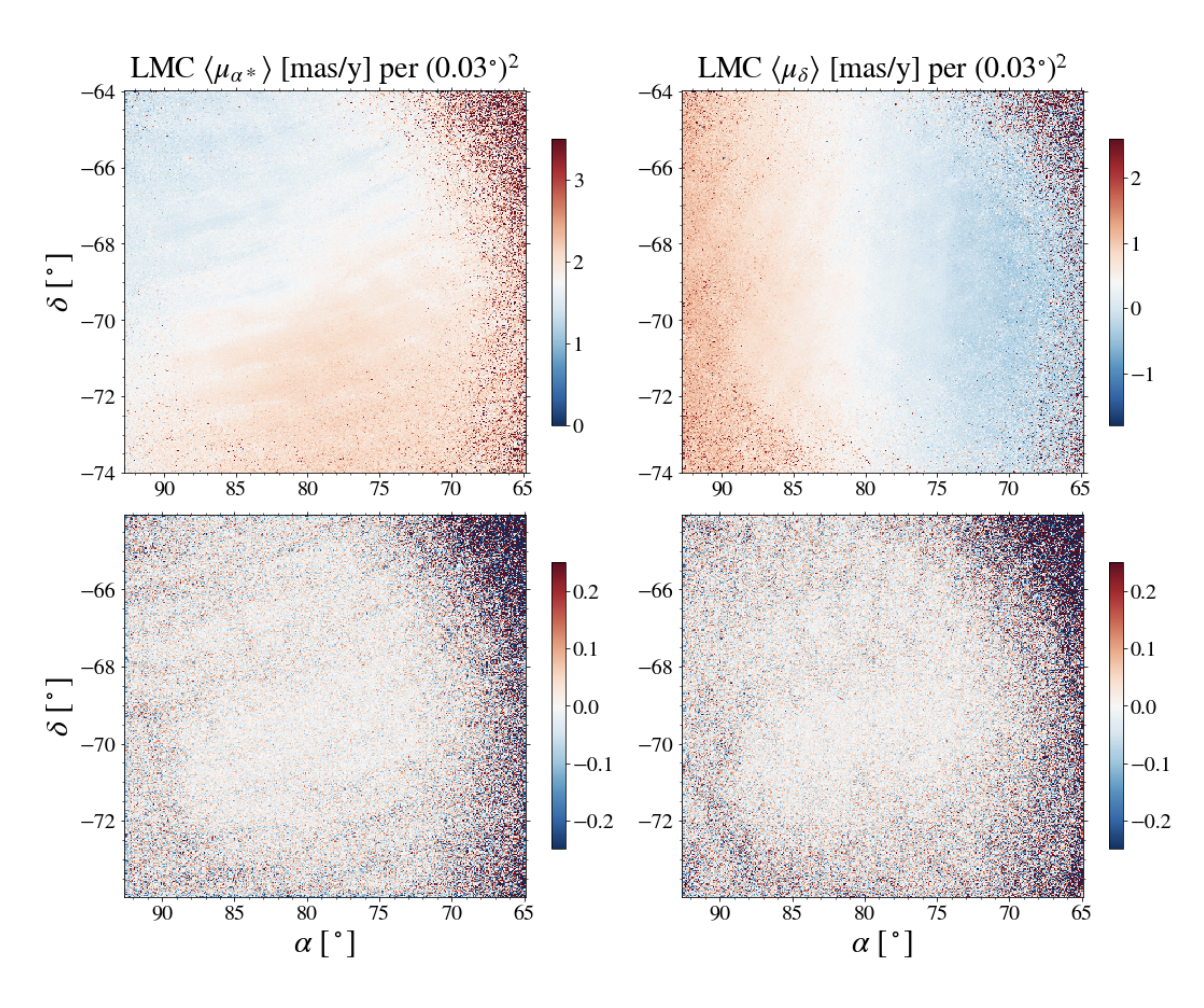 Figure 2: Average stellar proper motion per 0.03° pixels in the RA (left) and DEC (right) across the Large Magellanic Cloud. The top panel shows the proper motion in the original Gaia data sample after the removal of dense clusters; the bottom shows it after further background motion subtraction and removal of outlier stars. Figure 7 in the paper.

What did the authors find?

In performing their analysis, the authors produced exclusions on the fraction of dark matter present in lensing sources as a function of lens mass (see Figure 3). They also noted that the current analysis is statistics-limited, with their figure of merit being largest for relatively faint stars, such as the majority of those present in the Magellanic Clouds. Thus, the statistics in their analysis will improve with additional integration time, which is currently at 22 months for Gaia DR2. Furthermore, having a larger sample of stars, better resolution of binaries, and accurate modeling of telescope systematics will all lead to improvements over time, yielding promising prospects for the use of their method on future data releases from Gaia and other astrometric surveys. 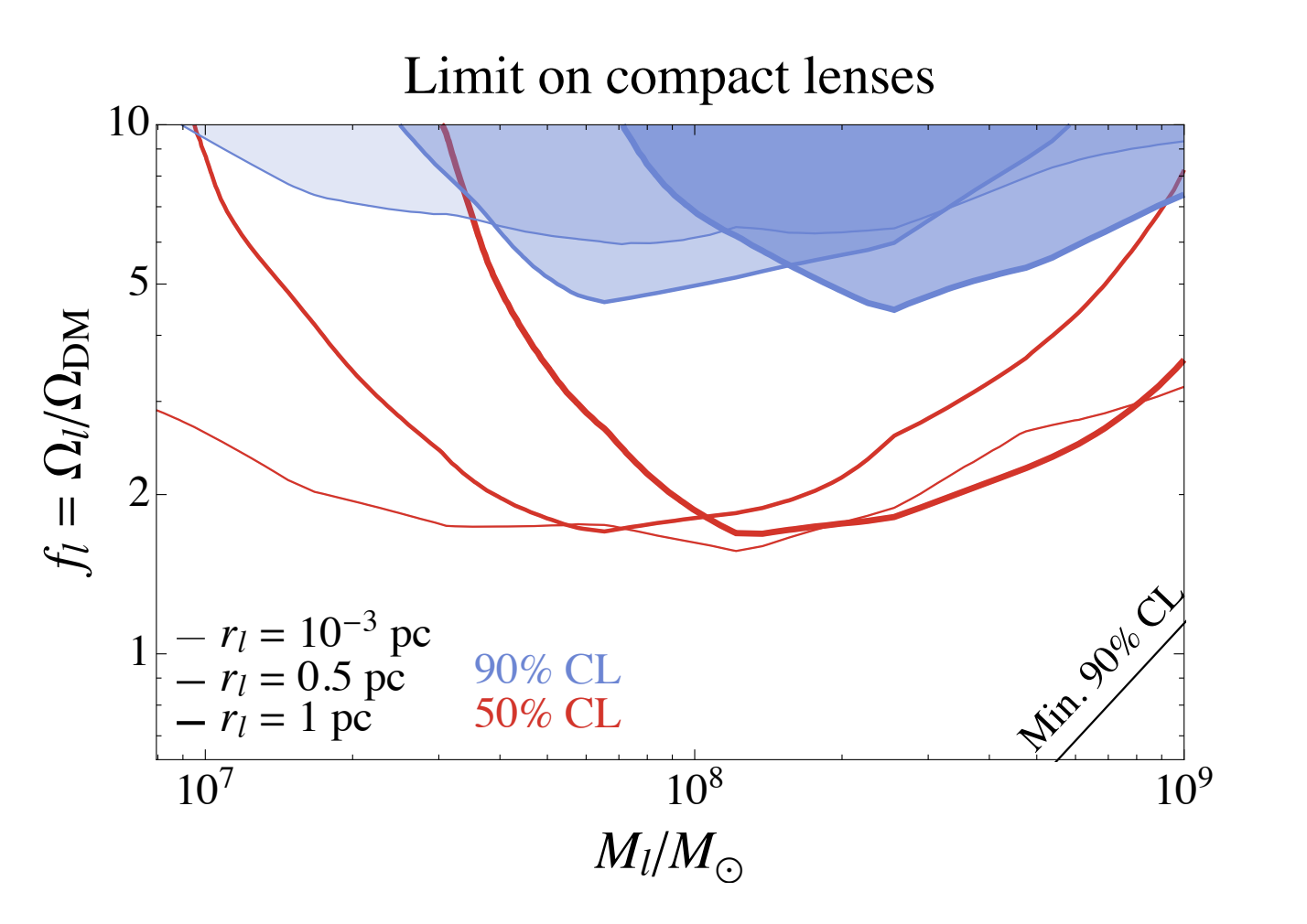 of compact objects with mass

with a given density profile. The three linewidths represent compact object radii

. The constraint for the smallest radius is equivalent to the one for point-like objects. Above the diagonal line at the bottom right, at least one subhalo eclipses the data sample with 90% confidence level (CL). Figure 5 in the paper.