Title: The Strikingly Metal-rich Halo of the Sombrero Galaxy

Is this galaxy an elliptical (Gryffindor) or ordinary spiral (Slytherin)?

The Sombrero galaxy, famous for its hat-like shape, has been observed many times. However, it maintains a certain level of mystery: much like the sorting hat struggled to sort Harry Potter into a Hogwarts house, the Sombrero galaxy is difficult to sort into a galaxy classification. According to Hubble’s galaxy classification system, galaxies fit into four main categories: ellipticals, ordinary spirals, barred spirals, and irregulars. We have a fantastic edge-on view of the Sombrero galaxy, which allows us to image both its disk and hazy bulge, as seen in Figure 1. Because of its disk structure and lack of developed spiral arms, many astronomers classify the Sombrero galaxy as an early-type spiral. However, there is evidence that the size of the Sombrero’s halo (its extended sphere of stars) and its number of globular clusters are more similar to values found in elliptical galaxies. This leads us to believe that the Sombrero galaxy may have two parent components that merged: a spiral disk galaxy and an elliptical galaxy, and therefore simultaneously belongs to two different Hogwarts houses. 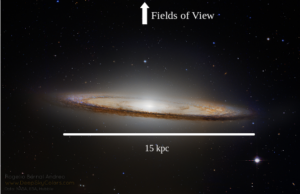 Figure 1: Close-up of the Sombrero Galaxy, M104 from the Hubble Space Telescope. The fields of view for this study are 16 and 33 kpc above the center of the galaxy, in the outer halo and out of the range of this image. Image from Rogelio Bernal Andreo with data from NASA, ESA, and the Hubble Legacy Archive.

In order to determine how the Sombrero galaxy formed, the authors of today’s paper used Hubble Space Telescope (HST) images to analyze the halo of the galaxy. Their fields of view for the two images were 16 and 33 kiloparsecs (kpc) above the center of the galaxy, which is pretty far from the brightest component that we usually recognize as the Sombrero (see Figure 1).

The goal of these images was to analyze the metallicity distribution function of the galaxy, or how much the metal content of stars changes as you move further away from the Sombrero’s center. Metallicity is measured by the quantity [Z/H], which takes the log of the ratio of metals (Z) to Hydrogen (H) and compares it to what we see in the Sun. A metallicity value of 0 means that a star has the same metal content as the Sun. Values above zero are very metal-rich, and metallicity drops as you move towards negative values.

In general, galaxies with massive halos and a steeper fall-off in their metal content as you move away from the center tend to have fewer parent galaxies (galaxies that merged together to form a new baby galaxy). Therefore, a metallicity distribution function can tell us about the number of parent galaxies and the formation history of the Sombrero galaxy. We can also use a metallicity distribution function to help classify the Sombrero galaxy by comparing its peak metallicity to values found in other known elliptical and spiral disk galaxies.

Scarlet and Gold or Green and Silver?

Calculating the metallicity of stars requires photometry of the stars. Basically, we take an image of a star and count how many photons we receive in each wavelength band. In general, metal-poor stars appear bluer, and metal-rich stars appear redder. However, other effects can change their colors as well, such as the age of stars (bluer = newer!) and the dust along our line-of-sight. To remove these effects, today’s authors use a basic dust map to correct for the foreground dust, as well as assume a uniformly old age of 12 billion years. Once they do this, they can use models to fit the metallicity of the stars in their sample. 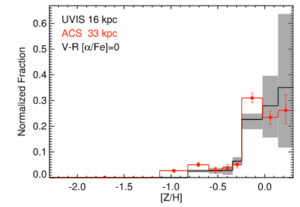 Figure 2: The metallicity distribution function for both fields of view (16 kpc in black, 33 kpc in red). Shaded gray areas and red error bars represent the respective uncertainties. A majority of the stars are metal-rich (have [Z/H] values near zero). Adapted from Figure 6 of the paper.

Today’s authors find that the metallicity within the Sombrero’s halo decreases as you move away from the center of the galaxy, but is dominated overall by metal-rich stars, as seen in Figure 2. Using their calculated peak metallicities, they compare the Sombrero galaxy to other galaxy metallicity measurements in Figure 3. They find that the halos of disk galaxies are more metal-poor on average (they have lower [Z/H] values), and that because of its high peak metallicity, the Sombrero galaxy fits better with the population of elliptical galaxies. 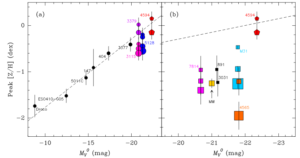 Figure 3: Comparison of the Sombrero galaxy (red pentagons) to other galaxies in peak metallicity and visible magnitude. Elliptical galaxies are on the left and disk galaxies are on the right. The dashed line on the left represents the best fit to elliptical galaxies, and the line in the right panel is the same but extrapolated to a different magnitude scale. See Figure 9 of the paper.

Using the HST images, today’s authors were also able to model the stellar mass of the Sombrero’s halo and compare it to the amount of mass the galaxy has accreted, or stolen from other galaxies. The number density of stars within the images allowed the authors to calculate a total halo mass with a few basic assumptions about the age of the galaxy. Separately, the authors used their metallicity values and a known correlation with accretion mass to calculate the Sombrero galaxy’s accretion mass. They found the accretion mass to be very similar to the total halo mass, which tells us that the Sombrero likely accreted its entire halo in a single major merger event several billion years ago!

In addition to this massive merger event, the Sombrero has other properties that defy the norm. Looking back to Figure 2, the Sombrero has a complete lack of low-metallicity stars, and it also has a higher average metallicity than any galaxy halo known to date! It is possible that a population of low-metallicity stars exists further out in the halo, but we would need images even more distant from the center of the galaxy in order to find them.

Just like Hogwarts houses, the galaxy classification system isn’t exactly black and white. However, unlike Harry Potter, we can’t just decide that we want the Sombrero to fit into one of our established categories. Despite looking very much like a disk from our edge-on view, the Sombrero galaxy possesses a host of characteristics that we associate with elliptical galaxies, likely because it formed as the result of a galaxy merger. As such, the Sombrero provides a unique overall picture of what galaxies may look like after they interact. The Sombrero galaxy clearly demonstrates the variety that exists in our universe and the contributions that instruments like HST make to our understanding of astronomy!