Title: Nightside condensation of iron in an ultra-hot giant exoplanet

Thousands of exoplanets have now been detected beyond our Solar System and many have challenged our expectations of what an exoplanetary system ought to look like. Before the first confirmed discoveries it was generally assumed that other planetary systems would more or less resemble our own – with small, rocky planets located close to the host star and larger gas giants residing farther out. But the discovery of the class of ‘hot Jupiters’ – large gas giants similar to Jupiter orbiting excruciatingly close to their host stars – showed that exoplanetary systems can exist in far more exotic configurations than was previously believed possible. Now an international team of researchers led by David Ehrenreich at the University of Geneva have discovered one of the most exotic exoplanets yet – an ultra-hot Jupiter where liquid iron rains from the skies. 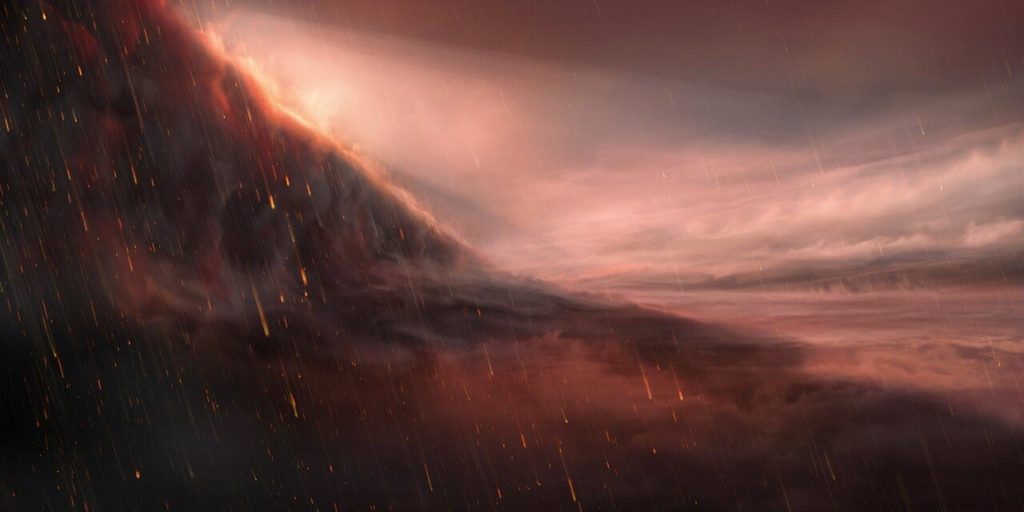 Figure 1: An illustration of the day-to-night transition zone on WASP-76b. Strong winds carry iron vapour from the hot dayside of the planet to the cooler nightside where it can condense and fall as liquid iron droplets. Image credit: ESO/M. Kornmesser.

The team observed the exoplanet known as WASP-76b as it crossed the disc of its host star using ESPRESSO, the Echelle Spectrograph for Rocky Exoplanets and Stable Spectroscopic Observations, at the European Southern Observatory’s Very Large Telescope (VLT) in Chile. ESPRESSO is a fibre-fed, high-resolution spectrograph and was originally designed to hunt for Earth-size rocky planets around Sun-like stars by detecting the tiny wobble of the star due to the orbital motion of an unseen companion planet (known as the radial velocity method). 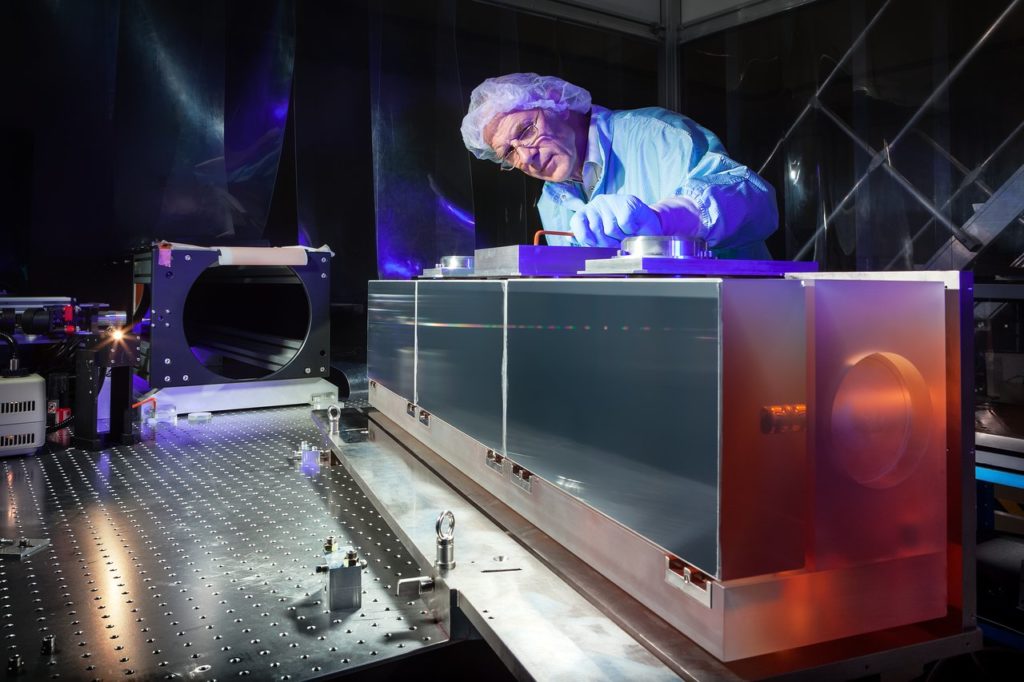 Figure 2: The diffraction grating of the ESPRESSO spectrograph being tested at ESO Headquarters in Garching bei München, Germany. ESPRESSO is capable of combining the light from all four Unit Telescopes of the VLT to create a virtual 16-metre aperture telescope. Image credit: ESO/M. Zamani

WASP-76b is located about 640 light-years from the Earth and orbits at only about three times the radius of its host star – much closer than Mercury does to our own Sun. The planet is about the same mass as Jupiter but about twice as large, and completes a full orbit in only 1.8 days. The planet is so close to its star that it receives thousands of times more radiation than the Earth does from the Sun, resulting in extreme temperatures on its surface and establishing WASP-76b as a member of the ‘Ultra Hot’ class of exoplanets. At such close proximity the planet is also likely to be tidally locked, meaning that it takes the same time for the planet to rotate on its axis as it does for it to complete an entire orbit. One hemisphere of the planet therefore constantly faces towards the star, similar to our own Earth/Moon configuration. The consequences of this are an estimated dayside temperature exceeding 2400 degrees Celsius and a nightside which is a relatively cooler 1500 degrees. The temperature on the dayside is so high that most matter will exist in atomic form and is high enough that metals such as iron will vaporise. The large temperature gradient between the day and night sides also drives extremely strong winds across the planet.

The team used the technique of high-resolution spectroscopy to examine the atmospheric composition of WASP-76b. This technique can be used to resolve the doppler shift of absorption features originating in the planet’s atmosphere from those of the host star (which is essentially stationary compared to the motion of the planet). Chemical species in the planet’s atmosphere can then be detected by isolating the planet’s signal and cross-correlating its spectrum with a template spectrum containing that species.

The researchers found a strong absorption signature corresponding to iron at the day-to-night border, which was blueshifted due to the combination of the rotation of the planet and the strong winds blowing from the hotter dayside. The team also found that the signal was not apparent at the morning border showing that absorption is not taking place there and therefore that iron is much less abundant or even entirely absent on the nightside and morning terminator of the planet. The team concluded that the most likely explanation for these observations is that iron vapour travels from the hot dayside of WASP-76b to the cooler night side via the strong day-to-night winds, where it can then condense into clouds and fall as liquid iron droplets. 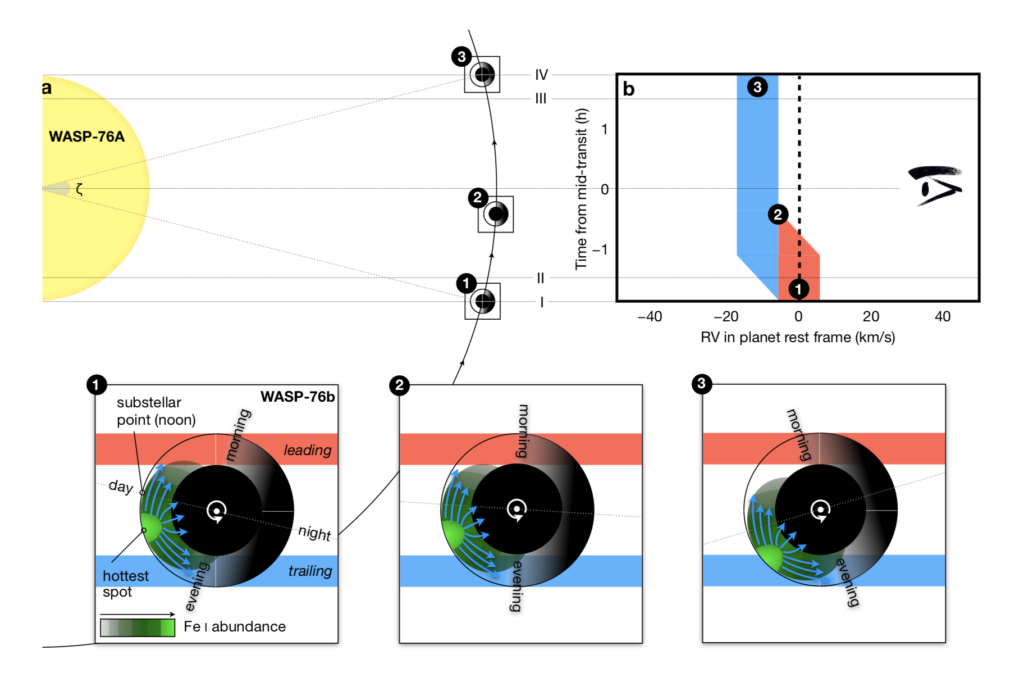 Figure 3: A polar view of the WASP-76 system. a shows the planet and star (to scale in size and distance) at different stages of the transit. b shows the observed absorption signature as the transit progresses. At ingress (1) absorption from iron atoms on the dayside can be observed through the leading limb at around 0 km/s. At (2) the iron is no longer visible at the leading limb as it rotates out of view and only the absorption at the trailing limb contributes to the signal which is blueshifted due to rotation and the day-to-night winds. (3) The absorption signal remains at the same blueshifted velocity until the end of the transit indicating a lack of contribution from the leading limb. Figure 3 in the paper.

These results are the first to show different atmospheric chemistry between the day-to-night and night-to-day terminators for an ultra-hot exoplanet atmosphere and were obtained during the very first science observations made with ESPRESSO in September 2018. The techniques used offer an exciting way to explore the climates of other extreme exoplanetary atmospheres and could also help to refine 3D global circulation models.