Nebulae are glowing regions of ionized gas and provide some of the most beautiful images in astronomy. Two of the most commonly known types of nebulae are the result of a star ending its life: planetary nebula like the Ring Nebula, and supernova remnants like the Crab Nebula. Another type of nebula are HII regions that are ionized by surrounding stars, for example via stellar winds. The subject of today’s paper is NGC 7635 or the Bubble nebula (shown in Figure 1), an HII region surrounding the O-star BD+60°2522. 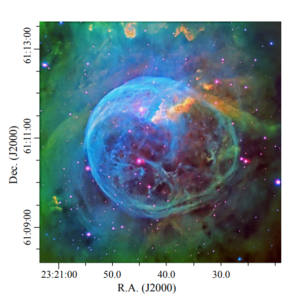 Figure 1: Optical image of the Bubble Nebula from the Nordic Optic Telescope (NOT). The colors correspond to different emission lines: [SII] (red), Halpha (green) and [OIII] (blue). (Figure 1 in the paper)

It is widely accepted that the Bubble Nebula originates from powerful winds coming from BD+60°2522. As material flows out of the star at high speeds (~2000 km/s), it heats up the interstellar medium via shocks, creating a bubble of ionized material around the star. Massive hot stars, in addition to having powerful winds, are expected to be bright X-ray sources and in some cases they produce diffuse X-ray emission in wind-blown bubbles. Due to its simple morphology, NGC 7635 is a good object for studying  the effects of massive single-star winds, which is necessary to understand the effects of young stellar groups on the ISM. The authors of today’s paper use multiwavelength observations to study the Bubble Nebula and its ionizing star, and find that perhaps the bubble is not produced by simple winds.

To look for diffuse X-ray emission in the nebula, the authors used deep images from the European Photon Imaging Cameras (EPIC) on XMM-Newton.  Before any analysis can be made, the background emission not associated with the bubble has to be subtracted from the image. The resulting image of the nebula region, shown below in Figure 2, does not show significant evidence of the diffuse emission associated with wind-blown bubbles. The source of bright and somewhat extended emission is the star itself, as expected from O-stars. After identifying and removing any point sources within the nebula region in the image, a spectrum can be extracted to estimate an upper limit of the diffuse X-ray luminosity and electron number densities, which can then be used to compare to theory expectations. 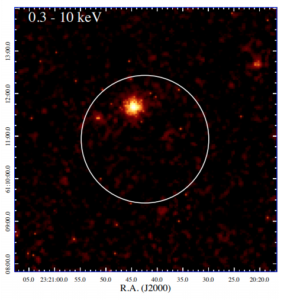 Figure 2: Background-subtracted image of NGC 7635 in the soft through hard X-rays (0.3-10 keV). The circular aperture extends to the size of the nebula. There is no evidence of extended X-ray emission; the bright red object is the star BD+60°2522. (Right panel of Figure 4 in the paper.)

To study the dynamics and structure of NGC 7635, the authors used high-resolution spectra from the Manchester Echelle Spectrometer (MES-SPM) at the Observatorio Astronómico Nacional in Mexico. The resulting 2D spectra show a possible double-bubble morphology, supported by the different velocity profiles shown in Figure 3. 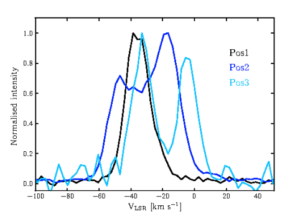 The existence of substructure in the nebula, together with the high proper motion of BD+60°2522, could mean that NGC 7635 is not a simple wind-blown bubble, but rather was caused by a runaway star moving through the ISM. The lack of diffuse X-ray emission could be explained by missing instabilities that would lead to material mixing within the nebula.