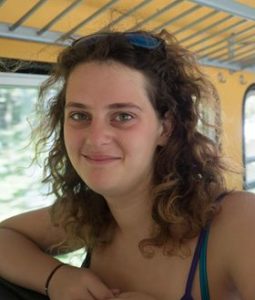 This guest post was written by Hannah Dalgleish, PhD student at Liverpool John Moores University, UK. She works on star cluster kinematics in radio and optical wavelengths. In her spare time she is a passionate advocate of outreach and science communication, and maintains a website listing many opportunities in astrophysics.

What are young massive clusters, and where can we find them?

Star clusters are all around us, from ancient globular clusters, to younger open clusters, and even nuclear star clusters – but what is a young massive cluster (YMC)? Like other star clusters, YMCs are gravitationally bound stellar systems. What makes them unique is that they are young (~100 million years old) and massive (typical solar masses greater than 104). To make things even more confusing, YMCs in other galaxies are called super star clusters [there’s an astrobites post about them here].

But why are these clusters interesting? A puzzle which astronomers have long been trying to solve is how do clusters, like globulars, form? One idea is that YMCs are the progenitors to globular clusters. Therefore, through studies of the stellar kinematics of YMCs and making comparisons to other clusters, astronomers hope to shed some light on the problem.

So where can we find these young massive clusters? One such place is the Sagittarius arm, home to the second most massive cluster in the Milky Way, Westerlund 2. At around 3.5 x 104 solar masses, it has surprisingly few stars (approximately 3,000). It’s about 4 kpc away and is only 1–2 million years old. Westerlund 2 is made up of two clumps, known as the Main Cluster, and the Northern Clump. Within the Northern Clump is an area of particular interest, the Northern Bubble (highlighted in red, Figure 1), and within that lies a jet-like structure known as “the Sock”. [Bear with me.] The Northern Bubble is particularly ideal for observing; a cavity within the dust and gas reveals a clearer picture of the stars inside. 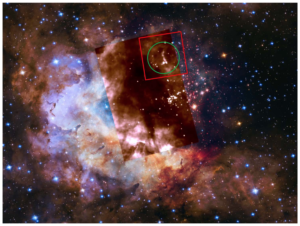 Figure 1. This image of Westerlund 2 is made up of two different images. The main image was taken by HST in three different filters (red, green and blue) and illustrates the colourful gas and dust belonging to RCW 49, an ​H II region​ nebula. Overlaid is where MUSE took observations (central rectangle). The red box contains the Northern Bubble and within the green circle is “the Sock”. Image Credit: NASA, ESA, the Hubble Heritage Team (STScI/AURA), A. Nota (ESA/STScI), and the Westerlund 2 Science Team.

How can we observe YMCs?

It is only until very recently that we have been able to look at regions like this in such detail, made possible by instruments like MUSE (Multi Object Spectroscopic Explorer). In 2017, MUSE received a makeover when it gained adaptive optics capabilities and can now make even better observations than Hubble! By pointing MUSE at Westerlund 2 we can derive the velocity dispersion (how stellar velocity differs from the average cluster motion) of the cluster at a high accuracy. We can discover if the cluster is massive enough to be long-lived, and help us answer if this YMC is in fact a globular cluster progenitor. In order for Westerlund 2 to survive, it needs to be massive enough to outlive the explosions of the massive OB star population, which will suddenly change the gravitational potential.

MUSE comes under a class of instruments known as integral field spectrographs (IFS). The intensity of each pixel is measured as a function of its colour (i.e. wavelength). In other words it’s like doing 3D spectroscopy, where on MUSE, each pixel contains the full spectrum between 4800 – 9300 Å.

With the MUSE observations, the team used special software called PampelMuse [German for grapefruit!] to extract the stellar spectra from the datacube. In total, they extracted 72 stars from the whole observed region of Westerlund 2 for which they derived radial velocities. They then plotted a colour-magnitude diagram to determine which of the stars were actually cluster members of the cluster, and which were field stars: 44 out of 72 stars are actually cluster members.

What do the kinematics of Westerlund 2 tell us?

Most surprisingly, the radial velocities of the cluster stars (Figure 2, middle panel) show a bimodal distribution, also confirmed by Gaia Data Release 2 and sub-millimeter CO observations. This is unexpected since stars in clusters usually follow a unimodal velocity distribution. Interestingly, two neighbouring gas clouds also show a bimodal velocity distribution, so perhaps the differing cloud and star motions are somehow connected. If true, this might suggest the young massive cluster formed as a result of cloud-cloud collisions, which would be an exciting development in our knowledge of cluster formation.

Future work on Westerlund 2 and other YMCs is undoubtedly needed to help answer if they really are the progenitors to globular clusters. If so, young massive clusters may hold the key to solving the longstanding mystery of how globulars formed. 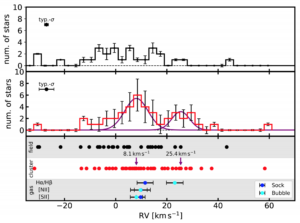 Digging up the past: galactic archaeology through chemical tagging

Looking for ionizing photons in our galactic backyard