Though several interesting examples came earlier, the first modern geologic map (William Smith, 1815) is said to have “changed the world.” Such maps prove incredibly useful for providing context, identifying resources and hazards, interpreting spatial and temporal relationships, and reconstructing landscape histories. Nowadays, images sent back from space probes can be used to create geologic maps of planetary surfaces beyond Earth for similar purposes. A global geologic map of Mars has been a useful resource for planetary geologists, and similar efforts have been made at regional and global scales for many other bodies in the solar system. Thanks to NASA’s Cassini mission, a global map distinguishing the different dominant surface types on Saturn’s moon, Titan, is now possible. Describing today’s paper makes for a good opportunity to delve into some of the basic ideas behind planetary mapping in general as well as the broad findings that point to why Titan is such a fascinating world.

Hidden under a thick atmosphere, Titan’s surface has been altered over millions of years by the combined influence of winds, rains, rivers, quakes, impacts from space, and possibly icy volcanoes. This activity is recorded in the surface and likely ongoing today, similar to Earth’s geologic processes. Rather different, on the other hand, are the surface conditions (-179 °C at 1.45 atm) and compositions (diverse hydrocarbons and ice) these processes involve. Titan is an icy world where organic molecules forming in the upper atmosphere appear to descend and blanket much of the surface. Nonetheless, familiar (and unfamiliar!) geologic formations can be mapped and characterized from Cassini’s radar and near-infrared images to better understand this distant world.

The authors of today’s paper began by mapping with synthetic aperture radar images of Titan, using other Cassini radar modes (e.g., passive radiometry) and other instruments to help define and characterize different geologic units. Because the radar image coverage is spotty (only ~46% coverage at a resolution of 1 km/pixel or better), the mappers had to improvise to make a global geologic map. Using more global datasets like the near-infrared images and relying on known correlations between higher- and lower-resolution data, they extrapolated to other parts of Titan. The resulting map is 1:20,000,000 scale, or twenty million times smaller than reality—a relatively coarse resolution that allows for understanding the general, global relationships between the major geologic units. 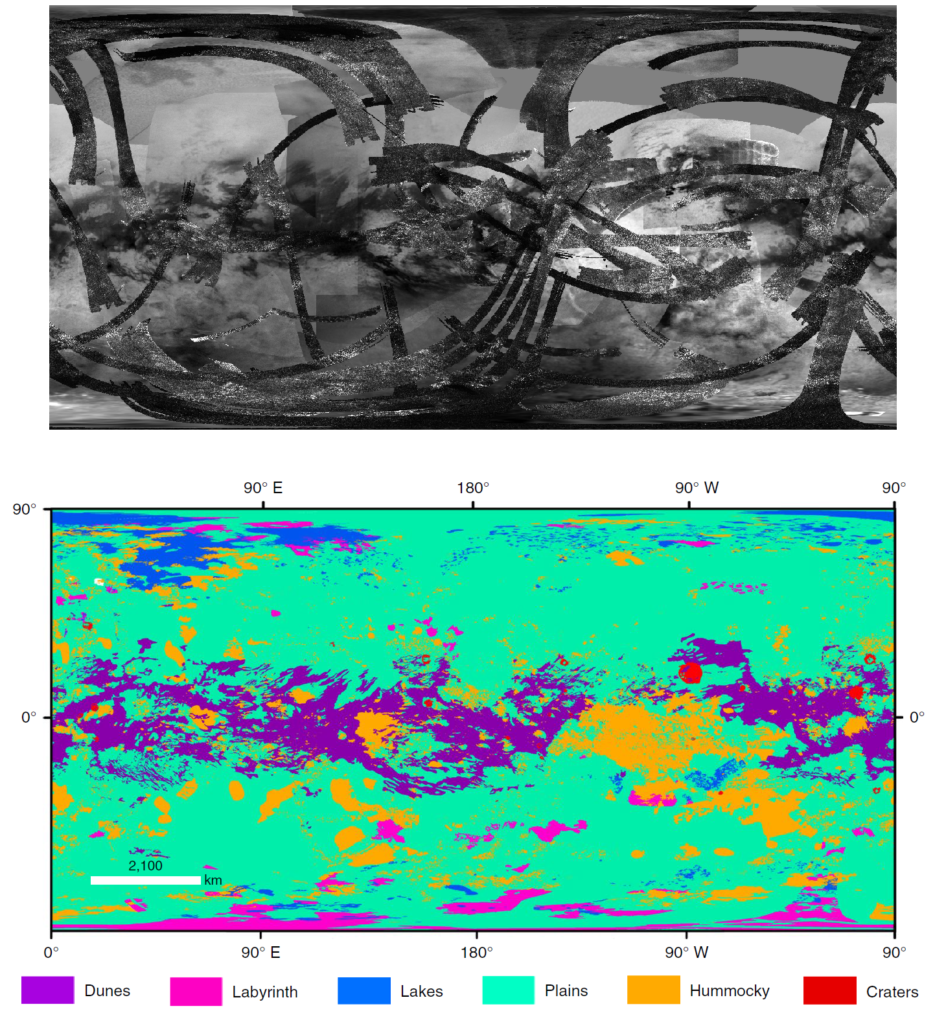 Top: An example of some of the data used for mapping, where dark strips are the higher resolution Cassini radar swaths, while the background is near-visible-wavelength data from the Imaging Science Subsystem. This map was made before mission completion so some radar swaths that were used by today’s authors are missing—still, you can get sense of the approximate coverage. Source: Jason Perry, University of Arizona. Bottom: Resulting global geomorphologic map of Titan. Note that like maps of Earth, the projection used to display here (Mercator) leads to increasing distortion toward the poles. Figure 2 in today’s paper.

Although subunits can be defined in the highest-resolution data, at the global scale, the authors defined six major units: 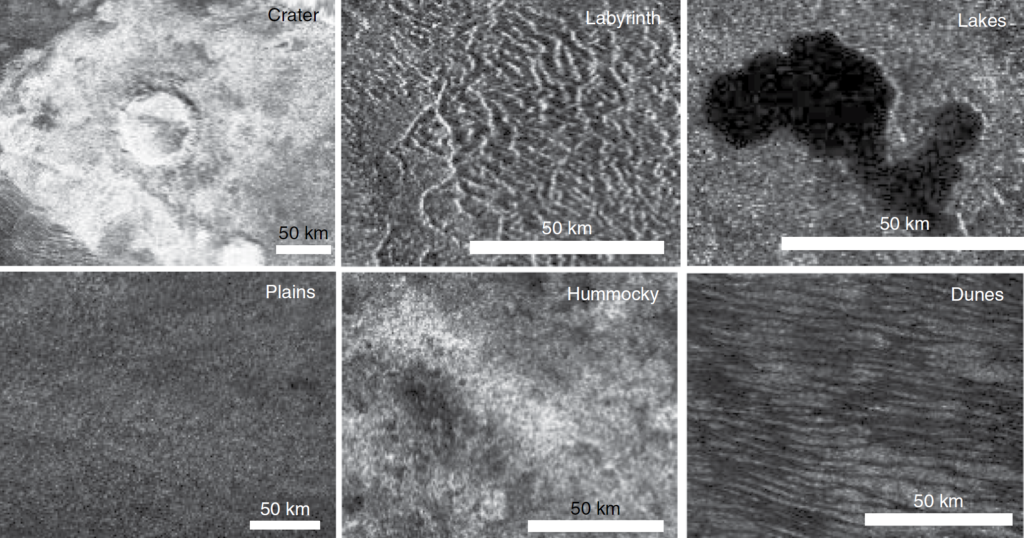 Radar image views of each of the six major geologic units mapped by today’s authors with scale bars in white. Figure 1 in today’s paper.

Although there aren’t enough craters to determine the absolute ages of different units on Titan, traditional geologic mapping methods can determine the relative ages of various units. Some of the most basic concepts in stratigraphy (or the layering of geologic units), are the laws of superposition, original horizontality, crosscutting, and lateral continuity. See the figure below for elaboration on each of these revelatory ideas. While these may seem obvious in a Geology 101 class now, consider how only a few hundred years ago naturalists debated where rocks even came from (fiery depths or oceanic crystallization—both are a little right and a little wrong!). Many of the fundamental ideas of stratigraphy were laid out in Nicolas Steno’s Prodromus (1669) and can now be applied to worlds as distant as Titan. That these laws will be just as applicable when the first high-resolution images are returned from Earth-like planets beyond the solar system is essentially the meaning of Uniformitarianism. 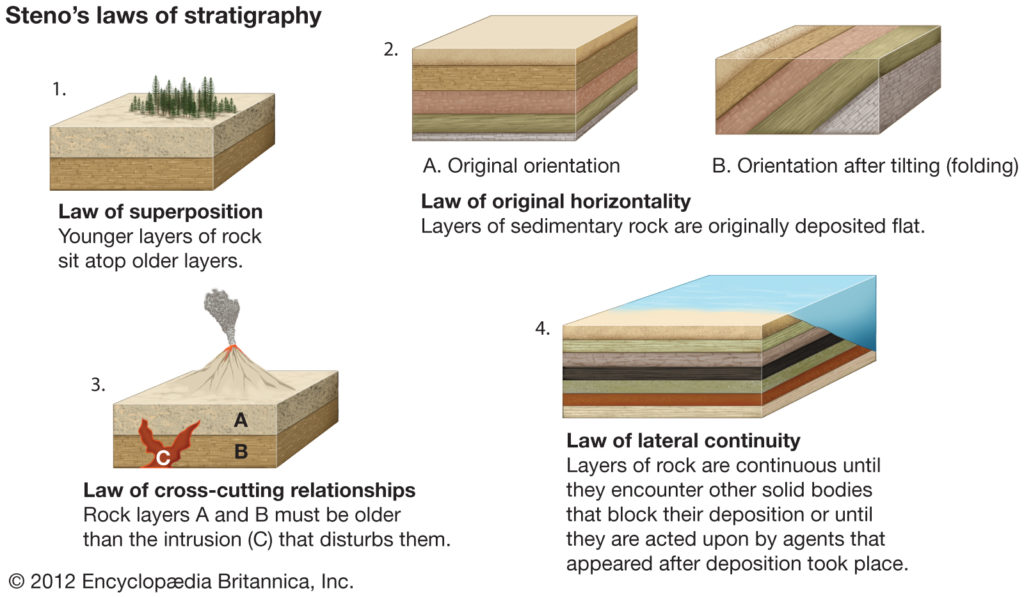 Textbook illustration of the four of the fundamental principles that can be derived from Steno’s early work. Source: Encyclopædia Britannica

After defining the boundaries of the 6 major geologic units on Titan and characterizing them from various available datasets, the authors interpreted unit interactions using rules like those described above to unravel some of Titan’s geologic history. The extensive plains unit appears younger than the hummocky and labyrinth terrains, but the dunes and lakes are the youngest overall as they are likely still forming and changing. The clear changes in unit types with latitude indicate more humid environments at the poles but dry enough environments along the equator to allow for wind-blown sand and dunes. A general story of Titan involves mountain formation, erosion, and impact cratering that occasionally unveil a water ice crust, while features and sediments on Titan are either composed of, or buried in, complex organic molecules. Just as geologic maps have been essential for understanding Earth, mapping of Titan can “change the world” there, and support future missions such as Dragonfly, whose 2034 arrival will advance our understanding of Titan even further.

The featured image for this article used another projection of the map you can see here: PIA23174