Brown Dwarfs (BDs) are objects with masses 13-80 times the mass of Jupiter but roughly the same radius (0.7-1.4 RJ). The lower mass limit separates them from planets, as their core fuses deuterium. On the other hand, if they get too massive (80 MJ) then their cores start to fuse hydrogen and they become a main sequence star.

Similarly to a planet, when a BD passes in front of its host star, it causes a dip in the star’s lightcurve. This allows us to detect BDs with missions like the Transiting Exoplanet Survey Satellite (TESS).

Because of their Jupiter-like radius and larger mass, BD transits should be as easy to detect as giant planets, yet there are only 23 known transiting Brown dwarfs. The lack of known transiting BDs is known as the “Brown Dwarf desert”. The answer to this problem may lie in their formation mechanism – whether they form like stars or like planets. Accurate measurements of mass, radius and orbital parameters are necessary to understand the formation and evolution of BDs.

The authors observed two targets of interest (TOI) with TESS and the Las Cumbres Observatory (LCOGT). Figure 1 shows the transit lightcurves for the two host stars: TOI-569 and TOI-1406. 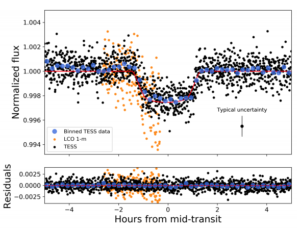 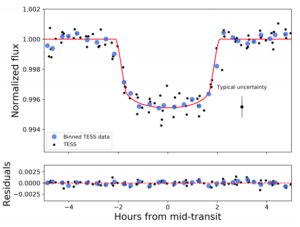 Since the depth of the transit depends on the ratio of the radii of the BD and its host star, the authors are able to measure the radius of the BDs from these lightcurves. However, objects with a range of masses may have the same radius, so additional radial velocity (RV) measurements are needed in order to measure mass and verify that the transiting object is actually a BD.

Spectroscopic observations for TOI-569 were taken using the CHIRON echelle spectrograph, as well as the CORALIE and FEROS spectrographs. Spectra for TOI-1406 were obtained with CHIRON and the echelle spectrograph on the Australian National University (ANU) telescope. The resulting RV curves are shown in Figure 2. 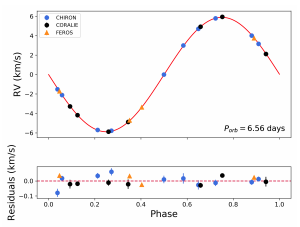 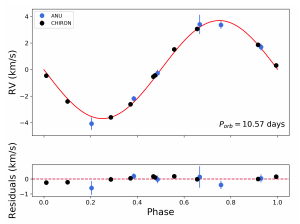 To obtain reliable masses and radii for the BDs, the authors simultaneously fit the lightcurves and RV curves using the MCMC fitting software EXOFASTv2. As an additional check, the authors use the pyaneti fitting software and find results consistent with the EXOFASTv2 models within 1 sigma. The measured masses and radii are M = 64.1 MJ , R = 0.75 RJ  for TOI-569b and M = 46.0 MJ , R = 0.86 RJ  for TOI-1406b.

The authors also used EXOFASTv2 to fit the stellar parameters like age and mass using isochrone models. The BD is assumed to have the same age as the host star. TOI-569b and TOI-1406b have ages of 4.7 Gyr and 3.2 Gyr, respectively.

One way to test BD evolutionary models is using a diagram of Mass vs Radius. Unlike a star, the deuterium-fusing core of a BD does not produce enough energy to fight gravitational collapse, causing the radius of a BD to decrease as it ages. This means that a BD of a certain age has an expected location in a Mass-Radius diagram. If you have an independent measurement of the BD age, then you can change the isochrone model parameters to match the observed position of the BD. 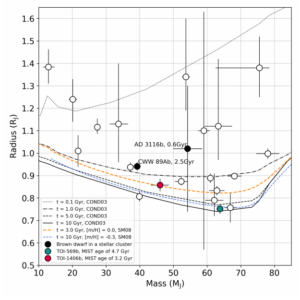 Figure 3 above shows the Mass-Radius diagram for transiting BDs, focusing on the BDs with accurate ages. The black points in Figure 3 have well-measured ages from star clusters. The addition of TOI-569b and TOI-1406b to the diagram allows the authors to test, for the first time, substellar isochrones for populations older than 2.5 Gyr.

TESS has so far allowed the discovery of 4 new transiting BDs and may find as many more in the future. However, many more discoveries are needed to fully understand the formation and evolution of BDs.

A “Difference” Approach to Light Curves