A Brief History of MACHOs

Though it makes up ~85% of the matter mass of the universe, dark matter has proven a tricky puzzle to solve. This is in part because, while we know the total mass of dark matter necessary to match astronomical predictions to observations, we have no indication of the individual masses of its constituent particles. While probably the most popular candidates are multitudes of small particles (like WIMPs or axions), another explanation could be a handful of very large objects, which we refer to collectively as MAssive Compact Halo Objects (MACHOs).

The draw of MACHOs is that they aren’t necessarily composed of exotic new bodies or phenomena: they could be anything with a lot of mass and low luminosity, such as brown dwarfs or neutron stars. A few years ago, a special type of black hole called primordial black holes (PBH) were a popular MACHO dark matter candidate. They became popular after the Laser Interforometer Gravitational Observatory (LIGO) began detecting mergers of black holes hypothesized to be primordial, but were soon ruled out by the same observations. In today’s paper, the authors revisit these calculations to breathe new life into the possibility of PBH and MACHOs as dark matter. 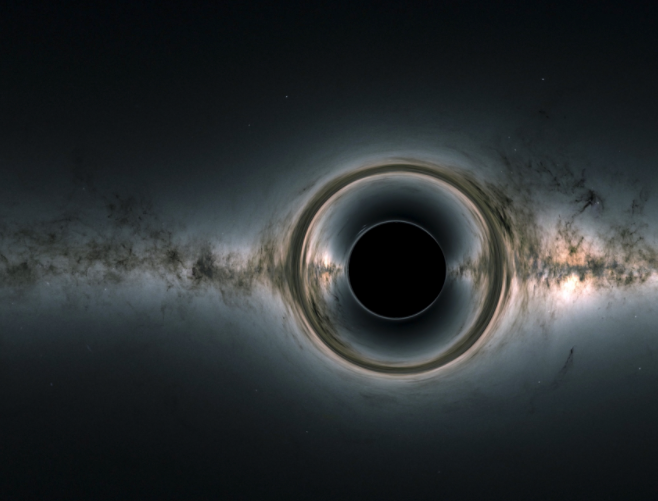 Figure 1: Is this what dark matter looks like? Simulated Black Hole Image: © NASA/ESA/Gaia/DPAC

What Makes a Black Hole Primordial?

Your run-of-the-mill astrophysical black hole is formed when stars collapse at the end of their lifetimes. On the other hand, black holes that are primordial could form way before stars, early in the universe. Instead of stars collapsing, entire regions of spacetime which happen to be much denser than their surroundings will collapse to form a black hole. Thus PBH would have formed early, would have to have high masses to survive until present day, and would emit no light, making them an interesting dark matter candidate. This astrobite and its links have more information on how PBH form.

Excitement about PBH as dark matter rose as LIGO began detecting mergers of 30–100 M☉ black holes. This range of masses is particularly interesting for PBH, as most masses below 30M☉and above 100M☉are excluded from being dark matter by observational constraints. However, an issue arose when considering how often LIGO was detecting these black holes merging: if PBH really were all (or even most!) of dark matter, calculations predict that LIGO should be seeing many more mergers of black holes.

The key to determining how PBH behave and merge lies in their mass. In the case of black holes in an expanding universe, however, writing down their mass is less straightforward. In the past, constraints have been put on PBH mergers by using the so-called Arnowitt-Deser-Misner (ADM) mass– which is a very technical way of saying “the mass of this black hole is M.” However, as the authors of today’s paper point out, this is only really applicable in regions of the universe are flat— say, like where we live, on planet Earth. Two things that tend to bend spacetime, therefore making it not flat, include black holes and cosmic expansion — both of which play a role in PBH as MACHO dark matter. Therefore, the authors propose using a mass called the Misner-Sharp (MS) mass, which would change as the universe expands as M/(1+z). This means that the farther back we look in time (aka, when redshift z > 0), the smaller the mass.

This doesn’t just change the strength of the signal that LIGO would detect, it changes when the binary decouples. In this case, decoupling means that the expansion of the universe pulling the two black holes away from each other becomes much smaller than the gravity pulling them together to merge. Assuming the redshift-dependent MS mass as above, the authors were able to determine a “dynamical” condition on binary decoupling which depends on redshift but not the present mass M; thus, any assumptions about M cancel themselves out, which might make the authors’ expression more general across different starting masses. Once the two PBH have decoupled, the binary starts inspiraling and will merge at a time determined by the binary’s geometry and black hole masses, the latter of which are set by the redshift. Therefore, knowing when the binary will decouple and its eccentricity tells the author exactly when the PBH will merge, and therefore whether we expect LIGO to detect the merger. From this, the authors predict most binaries will coalesce way before the LIGO window (z < 0.49), significantly lowering the expectation of LIGO events if PBH constitute a large part of dark matter (see Figure 2). 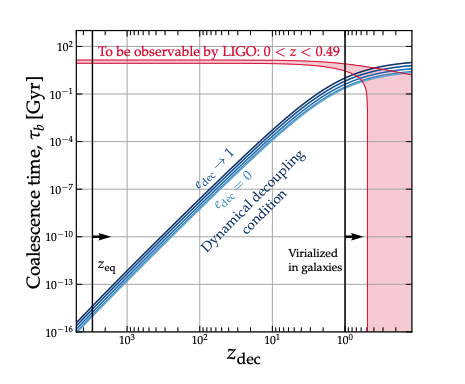 Figure 2: The authors summarize their results in a single figure. The horizontal axis represents the redshift of the binary decoupling from the universe’s expansion, and the vertical axis represents the subsequent time for the two PBH to merge. The red region represents the combination of decoupling redshifts and merger times that LIGO is able to observe. Finally, the authors’ decoupling condition is represented with the blue lines, each corresponding to a value of binary eccentricity between 0 and 1. Most of the binaries would merge well before the LIGO window. A very small part of the blue lines intersects with the red region, indicating that only a small number of PBH mergers would be visible to LIGO, which significantly lowers the number of LIGO events we would expect to see in a given time. Figure 1 in the paper.

Where do we go from here?

While the authors may have breathed new life into the PBH MACHO paradigm for dark matter by relaxing LIGO restrictions on their mergers, other astrophysical constraints on PBH numbers still exist. Most of these are keenly dependent on the black holes mass, and the authors intend to investigate how their time-varying mass would change things in upcoming studies.  Whether MACHOs constitute a significant portion of dark matter or not, this group’s investigation into primordial black hole mass evolution is certainly one to keep an eye out for.