The secret ingredient of the Magellanic Stream

The mystery of the Magellanic Stream

If you ever find yourself in the Southern Hemisphere on a clear night, look up to the night sky. If you’re lucky, you should be able to see what looks like two luminous clouds of stars, nearly resembling two severed pieces of the Milky Way.

These smears in the sky are the Magellanic Clouds, a pair of satellite galaxies orbiting our own galaxy. This dyad of dwarf galaxies is one of the Milky Way’s nearest neighbors, clocking in at a measly 150,000 light years away (for some other recent coverage of the Magellanic Clouds, check out this bite).  Less visible to the naked eye is a stream of high-velocity clouds of gas that inhibits a swath of sky over 100 degrees in extent, and which we believe accounts the history of a 6 Gigayear waltz between these two celestial bodies.

This structure is the “Magellanic Stream,” and while it’s known to be the result of constant interplay of tidal forces and ram-pressure stripping between the Large Magellanic Cloud (LMC), Small Magellanic Cloud (SMC), and the Milky Way, theorists have long struggled to explain exactly how the Stream came to be as massive and as high-velocity as it actually is. That is, they struggled to explain its formation until now.

In astronomy, a corona is a warm cocoon-like structure of gas that surrounds an astrophysical environment. Astronomers identified a hot corona around the Milky Way around 20 years ago, but only very recently was it believed that a warm corona might exist around the LMC, as well. This corona — the Magellanic Corona — could be a toasty 500,000 kelvin pool of ionized gas consisting mostly of ionized gas and weighing in at about 3 billion solar masses.

The researchers of today’s paper carried out the first hydrodynamic simulation of the Magellanic Clouds orbiting around the Milky Way that includes this Magellanic Corona. Including this corona drastically changes the results of the simulation, and the simulations are now able to explain the complex structures within the Magellanic Stream. For what the stream looks like from observations versus the new simulation, see Figure 1.

Figure 1. Comparison of the line-of-sight velocity from observations (left) to that from the simulation that includes the Magellanic Corona and the Milky Way hot corona (right). Overall, there is large agreement between the model and observations. The model appears smoother because it includes both neutral and ionized gas while the observations are only reflective of the ionized gas.

Why does the addition of the Magellanic Corona explain so much of the Stream’s formation?

Figure 2. Breakdown of the mass in the Leading arm (left panel) and Trailing arm (right panel) of the Magellanic Stream according to different models. Each bar in each panel corresponds to a different model, and each color shows the contribution to the mass from the SMC (magenta), LMC (black) and Magellanic corona (orange). When the corona is included, the mass is large enough to match observations. Figure 3 from today’s paper.

And it’s not just the problem of the missing mass that the Magellanic Corona fixes. Up until now, models struggled to explain a myriad of features about the Magellanic Stream, including its lack of stars and its spatial extent.

With the Magellanic Corona included, these problems are readily solved. As the extra mass is coming from a corona (where there is a negligible stellar mass), it is no surprise that there are not many stars in the stream. As for the spatial extent, the addition of the Magellanic Corona acts as a protective shield for stripped gas, allowing it to penetrate further into the Milky Way’s own corona. 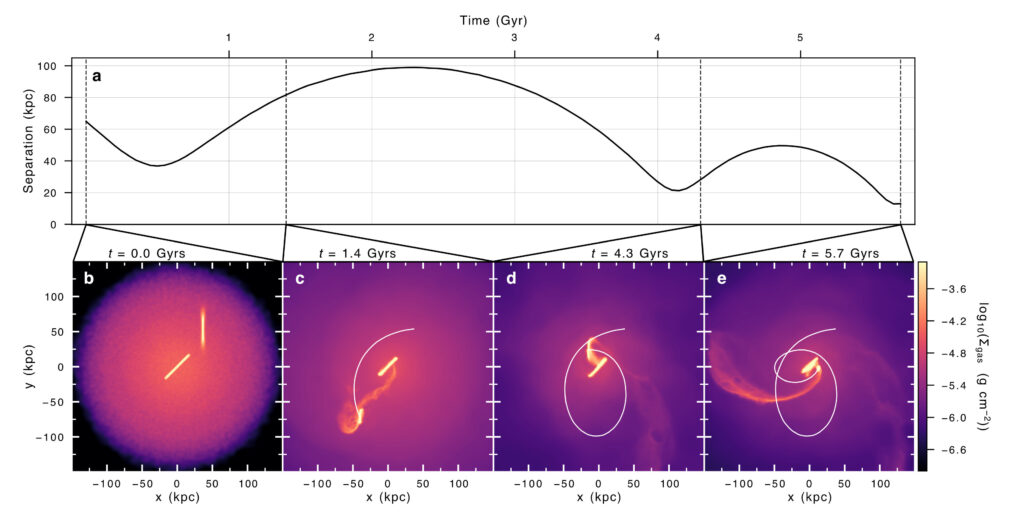 Figure 3. The evolution of the orbits of the Magellanic Clouds. In the top shows the distance between the SMC and LMC over time, and the bottom panels show snapshots of the gas column density at various times. Plots are centered on the LMC, and the evolution of the SMC is traced out in the white solid line. Extended Data Figure 2 from today’s paper.

Even more good news is that this model should be testable with current experiments. Future observations from the Hubble Space Telescope could inform us about the nature of the Magellanic Corona, and go on to explain more about our cosmic next-door neighbors. Those observations, in conjunction with this new model, have the potential to wrap up this fifty year old mystery and offer a more complete picture about galactic dynamics and our local neighborhood of galaxies.