Where can Black Holes that “should not exist” live?

This seemingly silly conundrum is important to explain another mystery, born out of a recent LIGO-Virgo discovery. “These Black Holes Shouldn’t Exist, but There They Are”, quoted the New York Times. The Los Angeles Times called it the ‘Impossible Black Hole’. The event making news was GW190521: the most dramatic collision of two black holes ever seen by the gravitational wave observatories. The two black holes weighed around 85 and 66 times the mass of the Sun, before colliding to form a gargantuan black hole weighing a whopping 142 times the mass of the Sun. The remaining deficit, totalling 9 solar masses, was released as gravitational wave energy, making it the most energetic event in the universe that we’ve ever detected.

The reason why many astrophysicists believed that such massive black holes shouldn’t exist is a feature of core-collapse supernovae that give birth to them. These explosions occur when very massive stars (heavier than about 8 times the mass of the Sun) run out of fuel to sustain nuclear fusion, and collapse under their own gravity. A large amount of mass is ejected, while the rest implodes uncontrollably to form the black hole. How heavy this remnant black hole is depends on the mass of the initial star. Supernova models easily predict the formation of stellar-mass black holes in the mass range from 5 solar masses up to around 60 solar masses.

Producing even heavier black holes requires the initial star to be heavier than around 130 solar masses. The collapse of these stars leads to the creation of free electron and positron pairs out of collisions of atomic nuclei with gamma rays. This partially stops the collapse and leads to a runaway thermonuclear fusion reaction that completely blows the star away—leaving no remnant black hole behind. The resultant explosion, called a pair-instability supernova, prevents the formation of black holes between the mass range of around 60 to 150 solar masses. This is termed as the ‘upper mass gap’ of stellar-mass black holes.

This is viable but with an important caveat that takes us back to our opening conundrum: We need places from which black holes cannot escape!

A big characteristic of binary black hole mergers is that the gravitational radiation they emit is not uniform in all directions. As a result, the conservation of linear momentum imparts a ‘kick’ to the newly formed 2g black hole. There are a number of fascinating things that we can study about these kicks, but when it comes to filling in the upper-mass gap, what matters is how fast the remnant black hole is flung off.

Just like a rocket needs a sufficiently high thrust to move it fast enough to escape the Earth’s gravity, a black hole getting a high enough recoil can escape its stellar environment into the void. Whether it escapes or not depends on the escape velocity of the environment, which typically depends on how dense an environment is. Relatively less dense stellar clusters have escape speeds around 10 km/s, while the denser globular clusters have escape speeds of around 50 km/s. Nuclear star clusters, which exist at the cores of galaxies and form one of the densest stellar environments, have much stricter escape speed limits of greater than 100 km/s.

The authors of today’s paper simulated multiple mergers over time from an initial population of black holes in an environment characterized by a given escape speed. Their main objective was to estimate how many second generation black holes, remnants of previous mergers in the environment, got retained because their kicks did not exceed the escape velocity. These black holes could hence participate in future mergers detectable by LIGO-Virgo, thereby forming even heavier black holes which populate the upper mass gap. 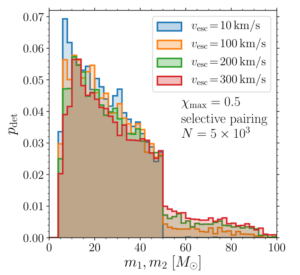 Fig. 1 A distribution of black holes detected as a part of a binary black hole merger in a stellar environment with a given escape velocity (v_esc). We see a greater spillover into the upper mass gap (>50 solar masses here) for environments with higher escape velocities, implying a greater number of heavier remnant 2g black holes are retained to take part in future mergers. 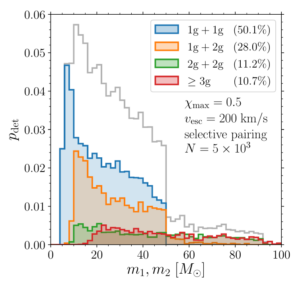 Fig 2: Distinguishing the nature of mergers reveals that mergers involving black holes in the upper mass gap are of the second-generation or higher.

That is why GW190521 is so tantalizing: not only is its remnant the heaviest black hole we’ve seen through gravitational waves, but each of the component black holes is heavy enough to be a part of the upper mass gap. This makes it quite likely that one of them, if not both, were second generation black holes retained in a dense enough environment. It is only the first piece of the puzzle that is the upper mass gap, but simulations like the one in today’s paper help us prepare for the other pieces that future LIGO-Virgo observing runs will inevitably shower.