Measuring the curvature of the Universe with cosmic clocks

Though astronomers have been studying the Universe for hundreds of years, there are still a lot of things we do not know about it. We do not know whether it is finite or infinitely large, and we cannot determine its overall shape. Nevertheless, we know that we can describe the Universe with a four-dimensional spacetime, the combination of our three-dimensional space and time. This spacetime is not rigid, but can be distorted and deformed by the content of the Universe, like a bowling ball distors a spandex sheet. The matter (and energy) also changes how the space part of spacetime is curved – and we can measure this curvature.

There are three possibilities for the curvature of the Universe, illustrated in Fig. 1: The Universe can be closed, flat, or open. A closed universe would be shaped like a sphere (although with a three-dimensional surface), meaning that if you would walk along a straight line you would inevitably end up at the position on which you started. Also, if you and a friend start walking on parallel paths, your paths will cross at some point. An open universe is the “opposite” to this. The distance between you and your friend will increase with each step and you will never end up near each other. A flat universe is exactly in between these two cases: parallel paths stay at the same distance and never cross.

We characterize the curvature with parameter Ωk. Using the sign convention of the authors of today’s paper, a negative Ωk indicates a closed universe, a positive Ωk an open one. If the Universe is flat, Ωk is exactly zero. 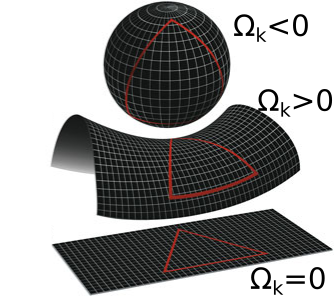 Figure 1: Different possibilities for curvature of the Universe. The Universe can be closed (top), open (middle), or flat (bottom). In the sign convention of today’s paper, a closed Universe has Ωk<0, an open Universe has Ωk>0. Image Credit: NASA/WMAP.

Cosmologists believe that the Universe is flat (Ωk =0). This is not only suggested by a variety of measurements, but also a key prediction of the theory of cosmological inflation. Inflation describes a brief period during which the Universe expanded exponentially (see this astrobite for more on inflation). The strong expansion of the Universe decreased the curvature, in the same way, as inflating a small balloon to the size of the earth makes it appear flatter. Still, there is an ongoing debate on this issue. The Planck satellite tried to figure out Ωk with the cosmic microwave background (CMB), remnant light from the early Universe, which travelled through our potentially curved Universe. The result was that Ωk is between -0.095 and -0.007, showing that the Universe cannot be flat, but is instead closed. A reanalysis of Planck data has confirmed this preference for a curved Universe.

However, the CMB on its own is not a sensitive probe for Ωk. It determines a combination of Ωk, the matter density in the Universe Ωm, and the expansion rate H0, i.e., the Hubble constant. A strongly curved Universe with a low value of H0 and a high value of Ωm can have the same CMB as a flat universe with a high H0 and a low Ωm. The fact that we can only measure H0, Ωm and Ωk together and not individually from the CMB is called the geometrical degeneracy.

Cosmologists combine the Planck measurement with other probes, such as Baryo-Acoustic Oscillations (BAOs) or Type 1a supernovae. Combining the Planck data with BAO measurements from the Dark Energy Survey leads to Ωk=0.0007 ± 0.0019, which is consistent with a flat Universe.

The authors of today’s paper, though, believe that this combination of Planck and BAOs is not valid. They argue that the Ωk parameters inferred by each dataset on its own disagree so strongly, that the results of a combination of the data sets can be unreliable. If the results of two datasets are in strong tension, this could indicate that one or both include unknown systematic errors, or they need different models to be described. They should therefore not be combined. In case of the curvature of the Universe, a different data set should be used to break the geometrical degeneracy. Their choice: Cosmic chronometers, the Universes standard clocks.

Cosmic chronometers are objects, whose time evolution we know (or can at least model very well), for example specific types of galaxies. We observe some of these objects at different redshifts, which indicate how far away they are. From the differences in their evolutional state, we then infer how much time has passed between the redshifts. This time difference tells us how fast the Universe has expanded between the redshift and gives the expansion rate H(z) at each redshift z. H(z) depends on the cosmological parameters, including Ωk, so that we can measure the cosmic curvature.

Which objects can we use as chronometers? The best choice are passively evolving galaxies. These are galaxies that have exhausted their gas reservoir and form only a few new stars. Since blue stars die earlier than red stars, the galaxies become redder with time. From the galaxies’ spectral colours (more precisely, their spectral energy distributions) and sophisticated models of stellar evolution, we can infer how much time has passed since they exhausted their gas and stopped star formation. When we compare two galaxies, which formed at the same time but are at different redshifts, the difference in their evolution tells us how much time has passed between the redshifts. We have found our cosmic clock!

Today’s authors use 31 measurements of H(z) with cosmic chronometers between redshift z=1.965 (approximately 10 billion years ago) and z=0.07 (approximately 1 billion years ago). Figure 2 shows these measurements, along with the best fit for H(z) and the prediction from the Planck measurements. Planck underpredicts H(z), but the tension between the cosmic chronometers and Planck is much smaller than the disagreement with the BAO measurements. Therefore, the authors argue that combining the Planck and the Cosmic Chronometer data set is justified. 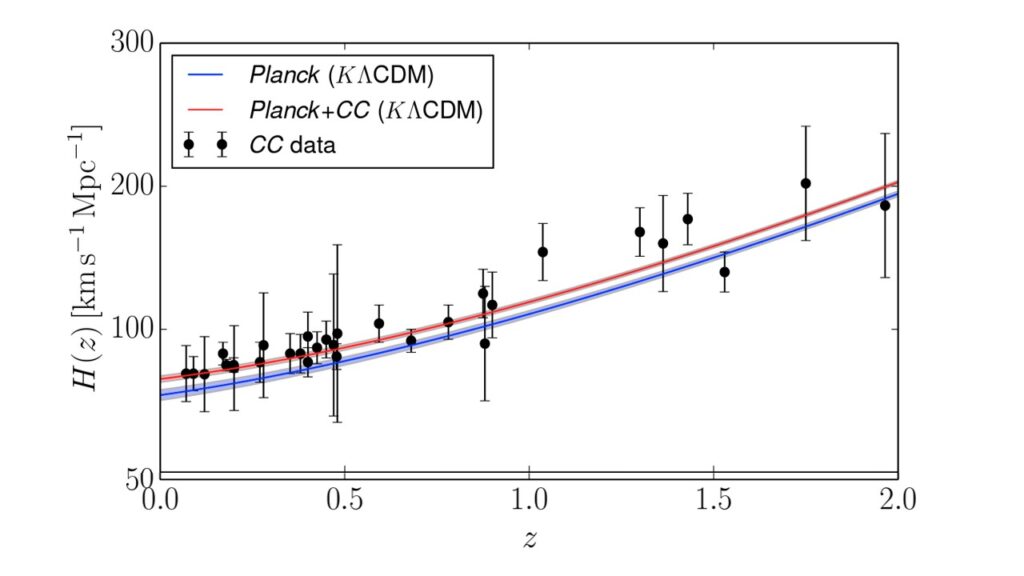 Figure 2: Cosmic expansion rate (also called Hubble parameter) at each redshift. The data points show the determination of the cosmic chronometer measurements used in the paper. The red line is the fit to the cosmic chronometer data combined with Planck; the blue line is the prediction of the Planck data alone. The Planck data underpredicts H(z) on its own. Based on figure 2 in the paper (slightly modified).

When doing so, they find the constraints on Ωm, Ωk and H0 shown in Figure 3. The combination of Planck and Cosmic chronometers prefers a higher value of H0 than the Planck data on its own. However, this is not enough to alleviate the famous Hubble-Tension. Most important, though, the combined data finds Ωk=-0.0054 ± 0.0055. This value is consistent with a flat Universe for which Ωk=0, as expected by cosmological inflation. 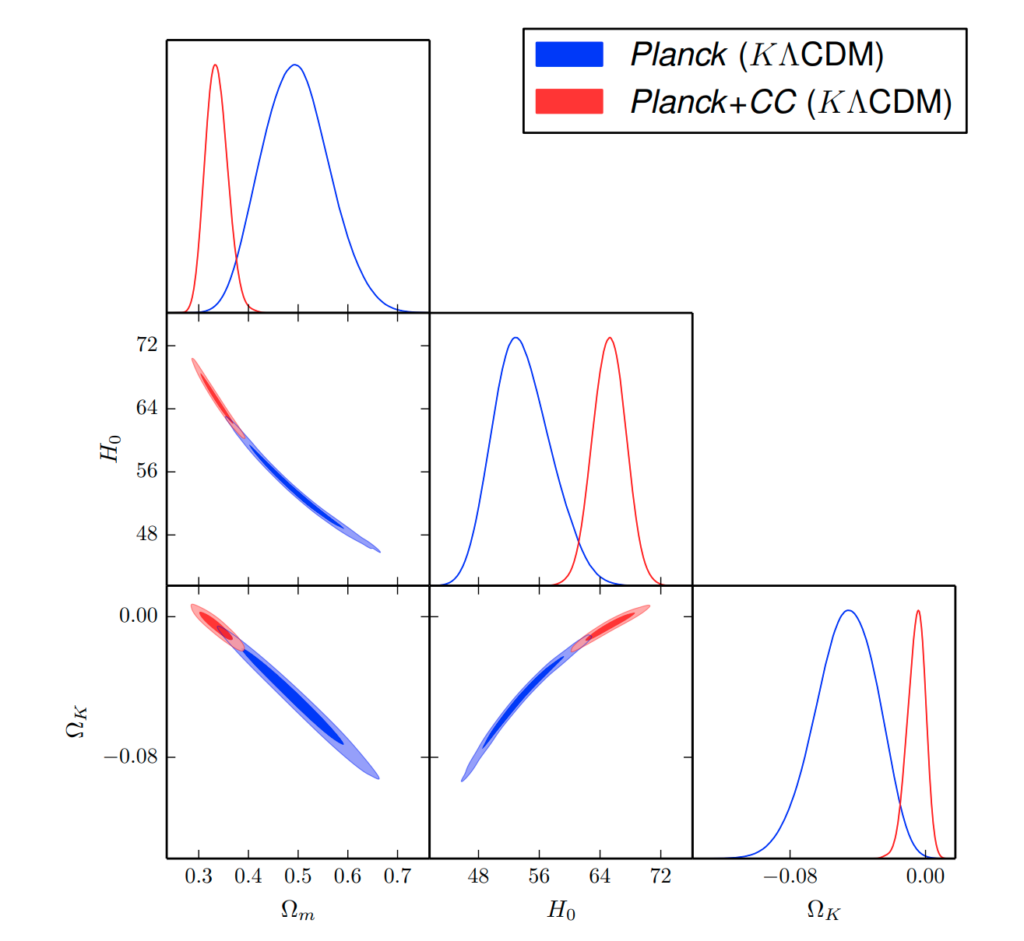 Figure 3: Constraints on curvature of the Universe (Ωk), the Hubble parameter (H0) and the matter density in the Universe (Ωm) using only the Planck data (blue) or the combination of Planck with the cosmic chronometers (red). The Planck data on its own prefers a small value for H0 and an Ωk <0. The combined dataset though confirms a flat Universe and a higher value for H0. Figure 1 in the paper.

In conclusion, the authors of today’s paper showed that the Universe is most likely not curved. Their result fits other measurements that combined Planck data with other probes, such as BAOs, but their choice to use cosmic chronometers means that this result is more reliable, because the individual datasets did not disagree strongly. This result is a notable step forward in solving the controversy around Planck’s curvature measurement. More measurements of cosmic chronometers are undoubtedly due in the future – so look out for more results from the universe’s clocks.

Running up that hill: are some galaxy clusters moving away faster than others?