All Aboard The Filament Express

Molecular clouds are the birthplaces of stars, but their structure is still shrouded in mystery. Dust often obscures our view, and we still aren’t totally sure how magnetic fields factor into the equation of star formation. Today’s authors peer into Serpens South, a molecular cloud with trails of dust leading into a dense core, to see what the magnetic field is doing and how it might affect star formation.

To reach the center of Serpens South, there are a few different routes you can take. It has multiple filaments streaming out of the core, much like an octopus’ tentacles. You can see these as the dark streams in the left of Figure 1. The authors analyzed three filaments in total, but most of their work focused on the filament that is labeled in the left panel of Figure 1, as well as the main ‘hub’ for star formation in the cloud. The hub is much like a busy train station: all the routes (filaments) lead to it and it’s full of activity. 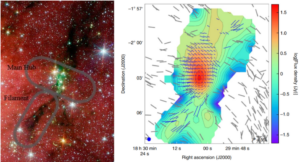 Figure 1. (left) Serpens South, courtesy of NASA. The main hub contains star formation, with filaments trailing out from the center. The main filament discussed in this paper is marked. (right) The intensity and polarization map for Serpens South. Brightness increases as you move towards the main hub. Polarizations are shown in blue (far-infrared HAWC+ data) and gray (near-infrared data from the literature). For the blue vectors, longer means more polarized. The gray vectors are all set to be the same length. Adapted from Figure 1 of the paper.

Today’s authors use far-infrared polarization and intensity measurements from the HAWC+ instrument on SOFIA. Polarimetry is the ticket to tracing magnetic fields. In general, dust grains (which we will assume are egg-shaped) line up with their long axis perpendicular to the magnetic field. So by determining the percentage of light waves that come from one orientation versus another (aka the polarization!), the authors can determine the direction of the magnetic field.

The right panel of Figure 1 shows the result of these polarization measurements. The color scale highlights the flux in the far-infrared, which is clearly brightest at the main hub. The filaments are also brighter than the surrounding region. Polarization measurements from HAWC+ (blue vectors) and near-infrared data (gray vectors, from another data set) are scattered across the field of view and trace the direction of Serpens South’s magnetic field.

The authors then examine how their polarization measurements line up with the structures in the cloud. In the filament labelled in Figure 1, there is a very interesting difference: the near-infrared polarizations appear perpendicular to the filament, while the far-infrared data appears to be parallel. That means that the magnetic field is changing at small scales.

To see how much the magnetic field changes, the authors subtracted the median filament direction (Xfil) from each polarization angle (XBpos). Then they calculated the visual extinction, Av, from measurements of the hydrogen column density at each polarization vector location. In Figure 2, we can see a clear change in magnetic field direction. At low Av (and generally further from the main hub), the near-infrared measurements in red show the magnetic field is basically perpendicular to the filament. As you move to higher Av and more dust/gas towards the center of the main hub, the difference between the filament angle and the magnetic field angle becomes smaller until they are nearly parallel. 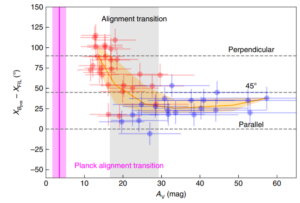 Figure 2. The difference between the median angle of the filament (Xfil) and the angle of the polarization vector (XBpos) versus the extinction (Av) in magnitudes. Near-infrared measurements are in red, while far-infrared measurements are in blue. There is a clear transition in the magnetic field from perpendicular to parallel to the filament as the extinction increases. That transition occurs somewhere in the shaded gray region. The pink region shows the first transition that has been found at about Av=3 using external data. Figure 3 in the paper.

This transition is kind of a big deal. Previous results have already found one switch at Av = 3 ish mags, which is shown in pink in Figure 2. At lower than 3 mags, gas and dust structures like filaments align themselves parallel to magnetic fields. Past that point (at higher hydrogen column densities), they switch to perpendicular  But now, the authors have found yet another transition at even larger values of Av! At approximately 21 mags, the magnetic field and filament run parallel to each other yet again.

The Train is Departing

The authors suggest gravity might be the cause of this new switch-up. As it pulls on denser material, gravity may drag the magnetic field along with the gas and dust towards the main hub. That means the filaments are shuttling gas and dust towards the hub, just like trains to a train station. This has important implications, because the main hub is full of little baby protostars that form from collapsing dust and gas. Today’s paper highlights that magnetic fields play a key role in star formation within this molecular cloud and may also be important to stars in other train stations!