Ten years ago, astronomers were astonished to discover large bubble-like structures emerging from the heart of our Galaxy. More impressive than any bubble you might have blown as a child, these balls of plasma span thousands of light-years and are visible in gamma rays, the highest energy range of photons. The origin of these Fermi bubbles (named for the satellite which first discovered them) is a mystery, and one that has puzzled astrophysicists since the discovery of the bubbles a decade ago.

Now, astronomers are scratching their heads yet again, as the authors of today’s paper uncovered that these bubbles are also visible in x-rays.

Taking an x-ray of the universe

Taking an x-ray picture of the whole sky is a lot harder than it might sound. Traditional x-ray telescopes are limited by their “field-of-view,” meaning most x-ray telescopes are only able to look at a narrow part of the sky at a given point in time. The instrument that took the images we are discussing today, eROSITA, is a satellite-based x-ray telescope designed to overcome this challenge. It successfully completed the goal of taking x-ray images of the whole sky with unprecedented resolution.

By imaging the whole sky, eROSITA detected over one million distinct x-ray sources. The results of the imaging are shown in Figure 1. Made up of mostly distant active galactic nuclei as well as active stars in our own galaxy, this menagerie of x-ray sources provides us with a huge catalog of sources that can help answer various astrophysical questions. However, the discovery we are interested today is only visible once you remove the emission of the more than one million different sources in this catalog. 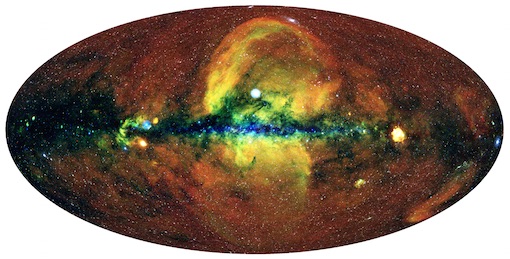 Figure 1. The results from the all-sky survey taken by eROSITA. The map is in Galactic coordinates, meaning the Galactic plane is the structure extending horizontally in the middle of the map. Bright regions correspond to strong x-ray emission, while dark regions have little x-ray emission. Figure 1 from today’s paper.

After removing the different x-ray sources, and zooming in on the medium energy range that eROSITA detects, we obtain Figure 2. Immediately visible is a pair of bubbles that emerge from the Galactic center. The photons from this bubble have energies of about 1000 electron-volts, which is about one million times less energetic than the gamma-ray detected Fermi bubbles. Although the authors of today’s paper believe the x-ray bubbles aoriginate from the same process as the Fermi bubbles, there are some distinct differences, so they have decided to dub these new balls of plasma the “eROSITA bubbles.”

Something akin to the eROSITA bubbles was detected before, but only in the Northern part of the sky (top part of Figure 2). A matching bubble below the Galactic plane had never been found until now, which led researchers in the past to dismiss the x-ray feature as unrelated to the Fermi bubbles. With the improved resolution and sensitivity of eROSITA, this survey detected the x-ray emission in both hemispheres and confirmed that these structures are indeed related to the Fermi bubbles. 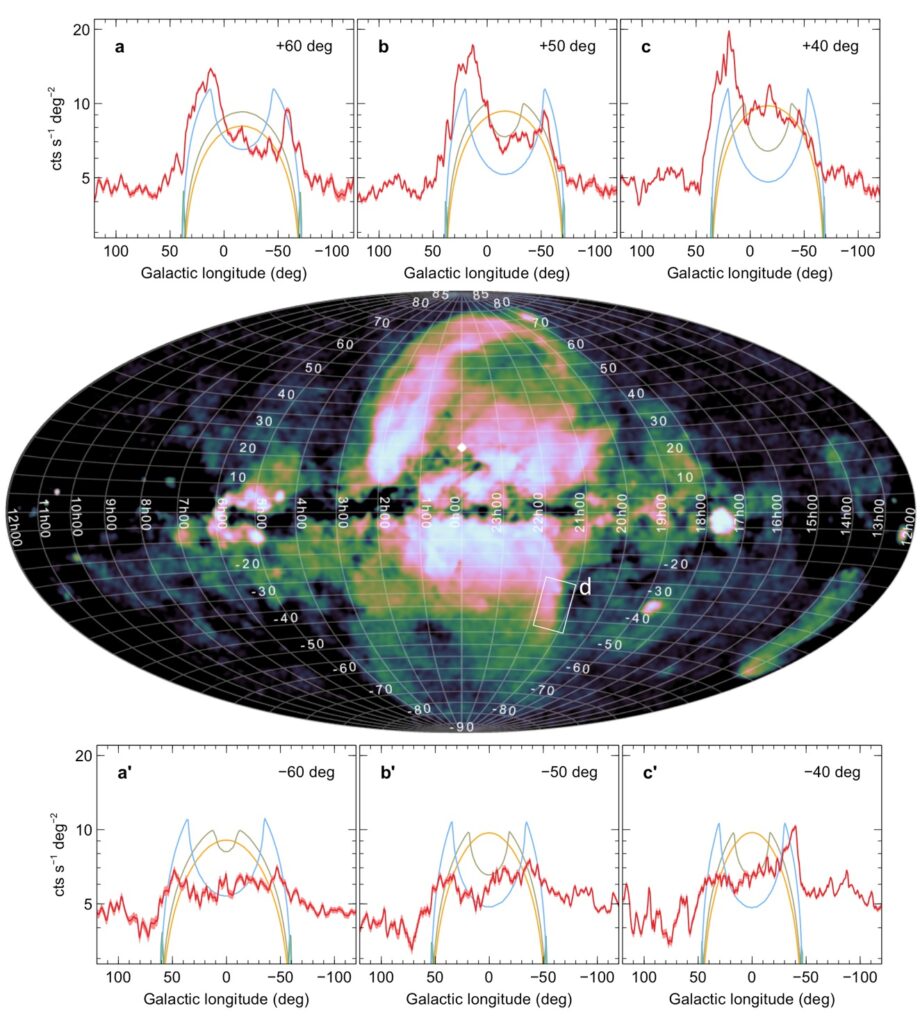 Figure 2. After subtracting the x-ray emission from known astrophysical sources, the eROSITA bubbles (pink and green structures) become clearer. The panels on the top and bottom display the measured surface-brightness profiles (red), which are compared to various models (other colors) seeking to explain the origins of these bubbles. Figure 2 from today’s paper.

It remains unclear where these bubbles come from. One way to investigate this is by comparing the structures in gamma-wavelengths with those in x-rays. As seen in Figure 3, the eROSITA bubbles are much larger than the Fermi bubbles. The authors argue that this is not completely unexpected, as the boundaries between the bubbles look similar to what one would expect from shocks emerging from the Galactic center. In this scenario, successive shocks might have formed the larger eROSITA bubbles and then the Fermi bubbles after that. 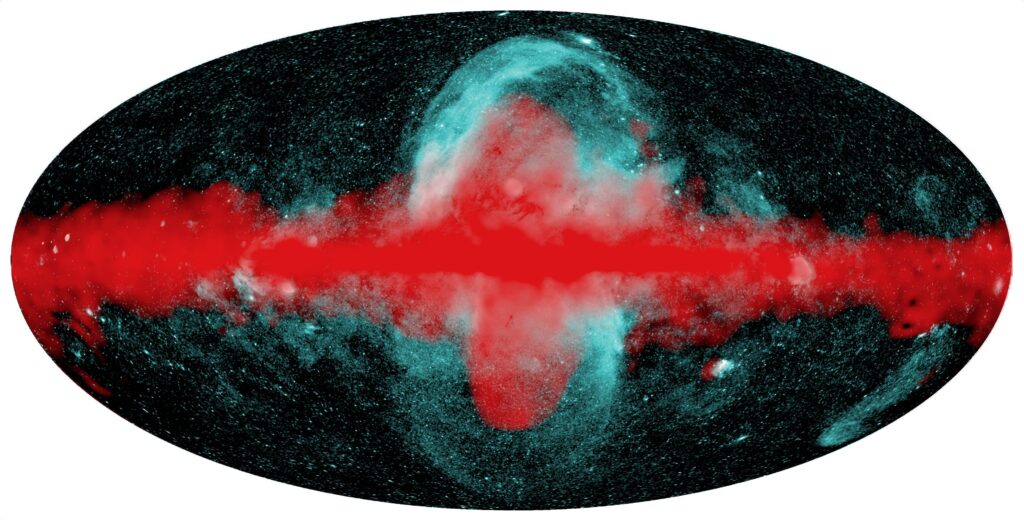 Figure 3. Comparison of the structure of the bubbles as seen in x-ray (green) and gamma-ray (red) wavelengths. The similar shapes of the structures hint at common origins, although the x-ray bubbles extend farther away from the Galactic Plane than their gamma-ray counterparts.

As to what provides the energy for these shocks, the answer is not completely clear – but it is certain that whatever formed the bubbles must have ejected a massive amount of energy. Possible ideas include periods of rampant star formation in our Galaxy or episodes of extreme activity from the supermassive black hole at the heart of our Galaxy. Whatever the mechanism, the results of today’s paper and future investigations of the eROSITA bubbles will shape our understanding of how galaxies, like our own Milky Way, are structured and how they evolve.

UR #18: Gamma-rays From Fermi Bubbles