In this series of posts, we sit down with a few of the keynote speakers of the 237th AAS meeting to learn more about them and their research. You can see a full schedule of their talks here, and read our other interviews here!

Evidence of the expansion of the Universe is ubiquitous, from the spectra of galaxies to the cosmic microwave background. Not only that, but we know the rate of expansion is not constant, it’s actually accelerating. But what exactly is causing the accelerated expansion of the Universe? That is what Dr. Marcelle Soares-Santos, an assistant professor at the University of Michigan, is trying to understand using gravitational waves and the Dark Energy Survey (DES). 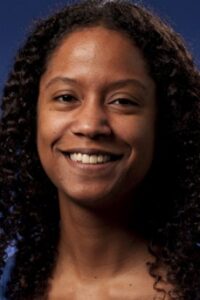 As Soares-Santos puts it, “We call it dark energy, but we don’t really have a clue for physically what that is. You know, we think that it’s a form of energy, maybe a field that permeates the empty space between the galaxies and makes the space-time expand faster and faster.”

Measuring distances is key for understanding dark energy, since the distance to astronomical sources depends on the rate of expansion. You might have heard of Type Ia Supernovae being used as “standard candles”, since their luminosity is known and their brightness is observed, they allow us to calculate a distance that does not depend on redshift. Gravitational waves can serve as “standard sirens” instead, since you get distance from the loudness of the signal in the detector rather than brightness.

As an undergraduate student in Brazil, where she is from originally, Soares-Santos actually started as a theorist working on the cosmic microwave background and primordial gravitational waves. By the time she got her master’s degree from the University of São Paulo, she realized she’d actually prefer to work closer to data, adding “I was not going to be happy being a pure theorist, just wasn’t for me I think, so i started looking at opportunities to go more into the observational front. I did not expect that I would go as far as actually touching the hardware.”

After receiving her PhD in 2010, also from the University of São Paulo, Soares-Santos joined Fermilab as a postdoc. At the time, Fermilab was responsible for the construction of the Dark Energy Camera (DECam), which she helped build at the Cerro Tololo Inter-American Observatory. Recalling how she got involved in instrumentation, Soares-Santos said, “I thought it was a great opportunity to expand, you know, what I have learned towards instrumentation as well. So I jumped right in and said ‘Look, I don’t have this experience, but I want to learn and I’m here, how can I help?’ ”

After the camera was built, Soares-Santos worked with the DES to understand how dark energy affects the formation of globular clusters. Around 2014, that all changed after the LIGO collaboration sent an email looking for partners in detecting electromagnetic (EM) counterparts to gravitational wave events.

“I remember reading this email, you know early morning, you still haven’t finished your coffee and thinking […] ‘The LIGO collaboration has been around for a long time, they haven’t detected anything yet […]’ and I just threw that email away, but then after my second cup of coffee I came back and said like ‘You know what?, you wouldn’t invite people to watch you fail. If you’re sending this call to everybody in the community, it must be because you believe you made a breakthrough in terms of sensitivity and so on, let me go and fish that email again back from my trash bin and read it further.’ And that’s when I realized that there was an opportunity there.”

The opportunity Soares-Santos was referring to has to do with how DES sweeps the sky. According to Soares-Santos “[DECam] has an ideal configuration and characteristics to look for these counterparts, […] you need a way to scan that area quickly and with a wide field of view camera on a large telescope, you have the opportunity to do that and that is very rare.” This is especially useful since LIGO is not able to pinpoint the exact location of the gravitational wave sources.

“It’s like looking for a needle in the haystack when the needle itself is fading away.”

The original goal of the DES was to look for supernovae, so the camera had to be adapted from the search of supernovae to the additional search of gravitational wave EM counterparts. Soares-Santos also had to adapt a bit, going from studying the structure of clusters to transient objects, describing how “It’s like looking for a needle in the haystack when the needle itself is fading away in a short period of time, so that is very different from looking for clusters.”

In 2017, Soares-Santos and collaborators were able to detect the first EM counterpart to a neutron star binary gravitational wave event GW170817, along with 6 other teams from other observatories. Although the DES is now complete after 6 years of taking data, the science analysis is far from done. There are still important questions about dark energy that need answered and Soares-Santos’ group of graduate students and postdoc are working to get the latest results from the DES, which will be discussed in a special session of the #AAS237 meeting on Friday, January 15.

Soares-Santos’ expertise working with hardware and getting an instrument off the ground will also be beneficial to future work, as she is now helping with the commissioning of a camera for the Vera C. Rubin Observatory’s Dark Energy Science Collaboration (DESC), an experience that Soares-Santos is also providing her students. Additionally, as faculty of the University of Michigan, Soares-Santos joined the Dark Energy Spectroscopic Instrument (DESI) project. Soares-Santos notes that this field is “not yet in the precision era […] but we are making progress at a fast pace” so we might be entering it by the time the next generation of PhD students graduate.

For undergraduates who are trying to get into research, Soares-Santos suggests to “Seek different opportunities […] perhaps via contacts that they make at the AAS meeting for example […], to work with other professors, sometimes in different institutions” and to keep an eye out for projects that you can complete, whether that is at a summer REU or longer projects in your home institution. For grad school applications, Soares-Santos adds “I think it is more impactful in your application if you say ‘I worked on this project and there was a beginning and an end’ […], that is perhaps more important than doing many, many different things and not finishing one of them […]. Focus on finishing a product so that it shows that you can bring something to an end, then afterwards [it] doesn’t mean you have to pursue your entire career in that particular topic.”

If you’d like to hear more about multi-messenger dark energy science, check out Dr. Marcelle Soares-Santos’ talk Cosmology in the era of Multi-Messenger Astronomy on Tuesday, January 12, 2021 at 5:50 pm ET. The talk will cover some of the early cosmology results from the Dark Energy Survey, as well as future experiments. 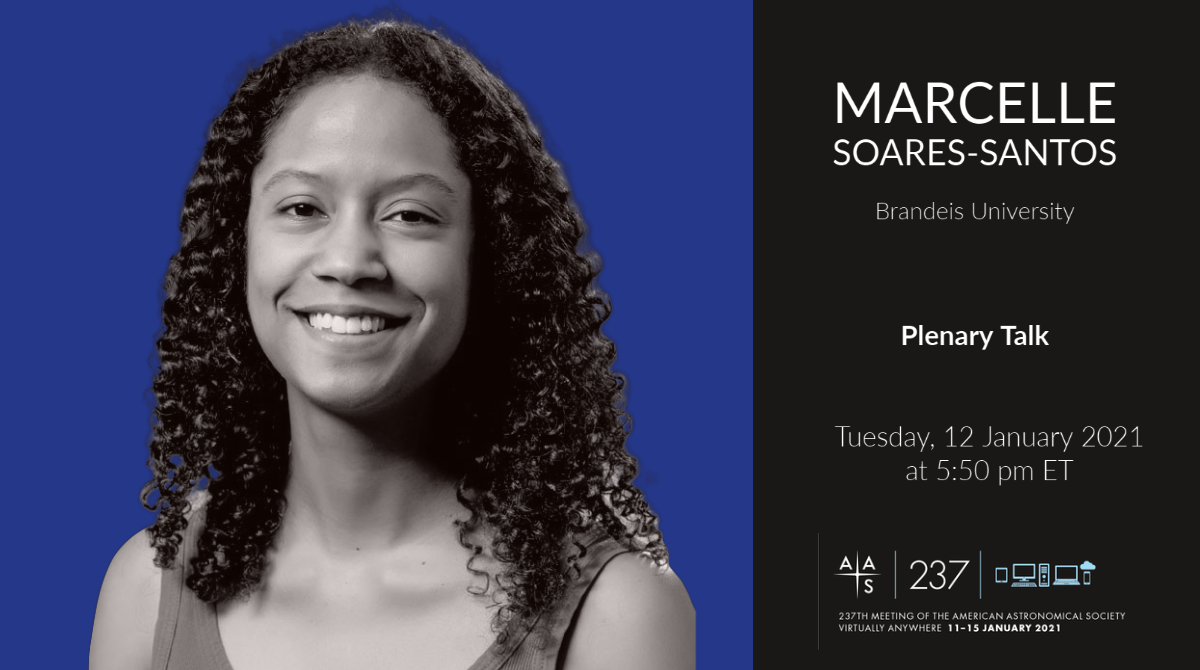