Put A Ring On It

Planetary rings are some of the most stunning features that planets have to offer. However, despite the fact that they are relatively common around solar system planets, there have so far been no confirmed detections of rings around an exoplanet. But don’t despair! The emerging planet family of “Super Puffs” – planets with cotton candy-like densities below 0.1

, could be prime targets for the first discovery. Today’s paper considers this possibility for HIP 41378 f, a transiting exoplanet with a radius 10 times that of the earth but with a density of just 0.1

The logic behind observing transiting super puffs to try and detect rings goes like this: a planet with rings would create a deeper transit signal than the same planet without, but the ringed planet would likely be mistaken for an ordinary planet with a very large radius. If the mass of the planet is already known through radial velocity measurements then the inferred density will be much smaller than the true density of the planet. The orientation and tilt of the rings are also important, as shown in Figure 1. A face-on ring will block more stellar light than an edge-on ring. This will increase the apparent radius measured from the transit light curve, making the apparent density even more extreme. Therefore, the extremely low-density super puffs might actually be more typical density planets, but with rings around them! 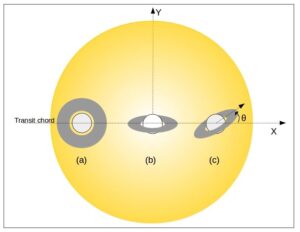 To find out whether HIP 41378 f could have rings, Akinsanmi et al. fit K2 mission observations to models of ringed and ring-free planets. By using Bayesian statistics they were able to compare not just which scenario provides the better fit to the data, but also what the most probable ring system might look like.

Ringing Out the Details

As a simple fit to the data using an ordinary planet doesn’t show any sign of anomalous scatter at the beginning or end of the transit, any ring system around HIP 41378 f would have to be tightly packed and start relatively close to the planet. This isn’t an impossible scenario – Saturn’s innermost ring begins at 0.1 Saturn radii away from Saturn, while the total system is nearly 7 times the size of the planet. A more troubling issue is the likely temperature of the rings. HIP 41378 f has an equilibrium temperature of around 294K, which is unsuitable for icey ring materials, so any ring around this planet would therefore need to consist of rockier materials, and have a density to match.

Taking all of this into account, the authors found that both a ringed and a ring-free transit model provide comparable fits to the data, as demonstrated by the closely matching red and blue models in Figure 2. 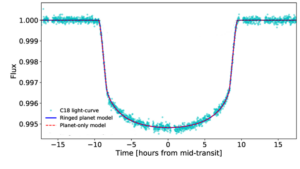 Figure 2: Best fitting models for a ringed planet compared to a ring-free planet for the transit light curve obtained during campaign 18 of the K2 mission. The light curve is plotted against the relative stellar flux. Adapted from Figure 3 in the paper.

, comparable to that of Uranus. The ring, shown in Figure 3, extends from 1.1 – 2.6 planetary radii, measured from the centre of the planet, tilted away from the orbital plane, almost face-on. Problematically, the best fitting ring has a density lower than that of rocky materials, which are the expected composition given the temperature of this planet. 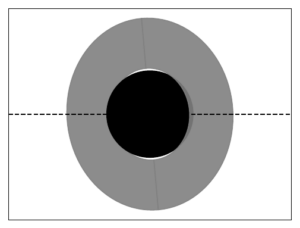 Figure 3: Diagram of the best fitting ring solution as seen during a transit. Figure 4 in the paper

Given the need for a low-density ring, and that the ring model is not significantly preferred, more observations of HIP 41378 f are needed to confirm the existence of a planetary ring. However, with more super puffs yet to be analysed, the prospects for the first exo-ring discovery look promising.