The Galaxy Main Sequence: What’s in the Scatter?

Title: The origin of scatter in the star formation rate–stellar mass relation

Observations of our local Universe have revealed that the stellar mass of a galaxy can be closely linked to many of its other physical properties. One such property is a galaxy’s star formation rate (SFR; see this astrobite for more details), which quantifies how many stars form in a galaxy over a given time period. The SFR is known to correlate with stellar mass (Mstar) for star-forming galaxies, a relation that is often referred to as the galaxy main sequence (MS; see Figure 1). Determining the underlying physical reasons for this empirically observed relationship, and explaining the processes that can cause individual galaxies to deviate from it, is an active area of research in galaxy formation. 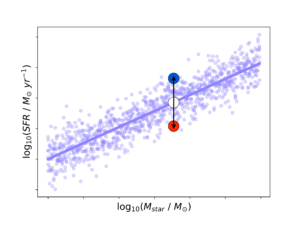 Figure 1: An example of the SFR-Mstar relation for star-forming galaxies. Galaxies of higher stellar mass typically have higher SFRs. The white point represents a galaxy with a typical SFR for its stellar mass, while the blue and red points represent galaxies that deviate from the median with relatively high and low SFRs, respectively. Note the correlation is observed in log-log space.

It seems reasonable that a galaxy’s SFR at the present day may be linked to its evolutionary history, with the present day SFR being determined by processes that occur over long timescales (~10 Gyr). For example, a galaxy that has a relatively high SFR at the present day (such as the galaxy denoted in blue in Figure 1) may have always exhibited a relatively high SFR throughout its history, and could have followed an entirely different evolutionary path to the galaxies denoted in white and red. Alternatively, it seems equally feasible that the red, white and blue galaxies in Figure 1 could share similar pasts, with the deviation in their current SFR being driven by random, short timescale (< 2 Gyr) processes such as bursts of star formation (leading to an enhanced SFR) or rapid quenching events (leading to a decreased SFR; see this astrobite for more details).

In reality, deviations from typical SFRs could be related to a combination of both short and long timescale processes, and trying to piece together the exact reasons for any deviation is a complex task; proper analysis requires the tracking of star formation histories of a large sample of galaxies over cosmic timescales. The authors of today’s paper aim to study the origin of this scatter in the MS through use of EAGLE, a cosmological simulation of galaxy formation.

To test whether the current SFR of a galaxy depends on the accretion history of its dark matter halo, the authors define z1/2 , the redshift at which a halo formed half its current mass. Dark matter halos are gravitationally bound regions where galaxies form and evolve; most halos are continually accreting matter, matter that includes the gas that can eventually cool to form stars. The value z1/2 can be considered a proxy for the formation time of the dark matter halo, with high values corresponding to halos that formed earlier in the history of the Universe.

Both Figure 2 and Figure 3 display the specific star formation rate (sSFR) for a sample of star-forming EAGLE galaxies, plotted against their stellar mass. The sSFR is defined in the same way as the SFR but is also divided by the stellar mass of the galaxy. The authors note that the sSFR is displayed rather than the SFR purely to aid with visualisation of their results, and that the same results are obtained for the SFR. 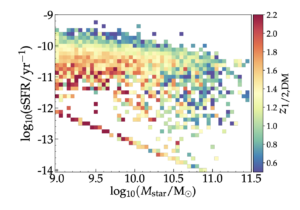 Figure 2: sSFR by Mstar, colour bar indicates the redshift that the halo formed half its current mass, a proxy for halo formation time. Galaxies with a SFR=0 are displayed as having a SFR = 10-3M⊙/yr for visualisation purposes. Figure 11 in the paper.

Figure 2 shows that the scatter in the sSFR is strongly related to halo formation time for galaxies of Mstar < 1010 M⊙ , with halos that form earlier tending to have a present day sSFR below the median value. This connection between a galaxy’s SFR and the formation time of the halo highlights that the observable properties of galaxies are fundamentally intertwined with the underlying large scale structure of the Universe. While this connection is important in explaining the diversity in sSFRs at low stellar masses, no relationship between sSFR and z1/2  is seen at higher stellar masses, indicating that other processes may be dominating at Mstar > 1010 M⊙ . 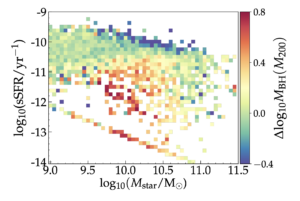 Figure 3:  sSFR by Mstar, colour bar indicates the change in BH mass relative to halo mass, a proxy for accumulated AGN feedback energy. Galaxies with a SFR=0 are displayed as having a SFR = 10-3M⊙/yr for visualisation purposes. Figure 15 in the paper.

Based on previous work with the EAGLE simulation, the authors go on to propose that the effect of active galactic nuclei (AGN) feedback may be responsible for the scatter in the Mstar  > 1010 M⊙ regime, such that galaxies that have experienced relatively large amounts of AGN feedback may be more likely to exhibit lower present-day sSFRs due to the effect of quenching. The efficiency of black hole growth is used as a proxy for the total accumulated energy due to AGN feedback (see Figure 3).  While this relationship seems to hold for galaxies in the 109.5 M⊙ < Mstar  < 1010.5 M⊙  mass range, the relationship doesn’t extend to galaxies of low or high Mstar . In the case of low stellar mass galaxies, the absence of this relationship is expected since AGN feedback is unlikely to play a significant role in quenching low mass galaxies, compared to mechanisms such as supernovae-driven feedback. The authors suggest that at Mstar > 1010.5 M⊙, most galaxies are already quenched, which may be why no significant trend can be seen.

In summary, today’s paper uses the EAGLE simulation to identify the physical reasons for the scatter in the MS. A clear mass dependence on the processes that drive the scatter is discovered, with the assembly history of dark matter halos being relevant for lower stellar mass galaxies, and the effects of AGN feedback becoming more important at intermediate to high galaxy stellar masses. Ultimately, the results of today’s paper imply that the majority of scatter in the MS can be explained by physical processes that occur over long timescales, highlighting that a galaxy’s past can have a significant effect on its present day observable properties.