Title: A Globular Cluster Towards M87 With a Radial Velocity <-1000 km/s: The First Hypervelocity Cluster

Figure 1: An artist’s impression of the globular cluster HVGC-1 being ejected from the galaxy M87, as seen from another point in the Virgo Cluster. Image credit: Harvard-Smithsonian Center for Astrophysics.

Supermassive black holes are extraordinarily dynamic objects, responsible for energetic relativistic jets, low-frequency gravitational waves, and even changes in star formation rates. Unsurprisingly, encounters with supermassive black holes can be catastrophic, and stars that wander too close risk being torn apart. However, under the right conditions, some of these unlucky few find themselves accelerated to speeds of thousands of kilometers per second – fast enough to leave their host galaxies!

To be thrown out of a galaxy, a star typically needs to interact with both a supermassive black hole and a third object – maybe a companion star or another black hole. As you might expect, this sort of scenario is quite rare, but certainly not unheard of. In fact, astronomers have catalogued around two dozen of these stars in the Milky Way, enough that we have a term for them: hypervelocity stars.

Could other objects find themselves doomed to suffer the same fate? This is the question that today’s paper seeks to answer by looking towards the Virgo Cluster, 50 million light-years away. At this distance, detecting individual hypervelocity stars is nearly impossible, but more luminous objects should be easily visible. Over several years, the authors performed spectroscopic observations of hundreds of new globular clusters in the Virgo cluster, using the twin Keck telescopes in Hawaii and the Multiple Mirror Telescope (MMT) in Arizona. In a dataset collected between 2010 and 2013, they found 2500 globular cluster candidates, as well as a number of foreground stars and neighboring galaxies.

The spectra allowed the team to determine the line-of-sight velocities of the objects they observed. Most of those velocities cluster around +1000 km/s, the mean velocity of the Virgo Cluster, which is moving away from the Milky Way. This makes sense; we would expect most constituents of a galaxy cluster to have similar kinematics. However, one object, with a projected distance of 85 kpc (almost 280,000 light-years) from the center of the galaxy M87, stood out because it appeared to be moving toward us at a speed of 1000 km/s – offset from M87 by 2300 km/s! Figure 2 shows just how starkly this object stands out from the distributions of many of the stars, globular clusters, and galaxies between us and the Virgo Cluster. 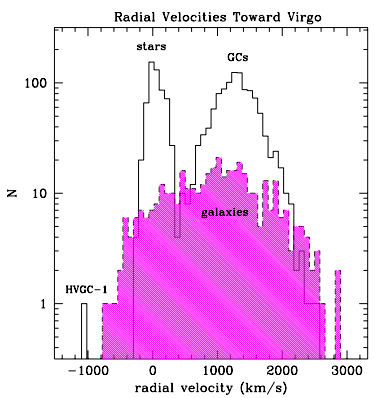 Figure 2: A histogram of radial velocities of objects observed in the direction of the Virgo Cluster. While other objects in the cluster follow clear distributions centered around the cluster’s mean recessional velocity, the mysterious object, dubbed HVGC-1, stands out dramatically, even when compared to foreground stars in the Milky Way. Figure 1 in the paper.

There were two feasible possibilities for what the mysterious object could have been. The simplest explanation is the object was a foreground star in the Milky Way itself, a mischievous interloper and, judging by the speed, perhaps a hypervelocity star. However, based on the location of the cluster in the sky, this explanation had a glaring hole: the star would have to be moving inwards from the outskirts of the galaxy – the opposite direction we’d expect most hypervelocity stars to be traveling.

The alternative interpretation was that the object was actually a star cluster in the Virgo Cluster. High-resolution photometry revealed that, while it was small by globular cluster standards, it was not unreasonably so. In addition, the spectra the team had obtained using the MMT strongly supported the globular cluster model. When comparing the strengths of particular types hydrogen and calcium emission, it became clear that the object closely resembled other M87 globular clusters, while appearing distinct from halo stars in the Milky Way and globular clusters in our neighbor, the Andromeda Galaxy. Figure 2 shows that while the globular clusters of both galaxies lie in two bands, the object is significantly removed from both bands, as well as the blob representing Milky Way halo starts. The conclusion was strengthened by color indices obtained through photometry, in which the object – now referred to as Hypervelocity Globular Cluster 1, or HVGC-1 – appeared to be a typical globular cluster and nothing like a halo star. 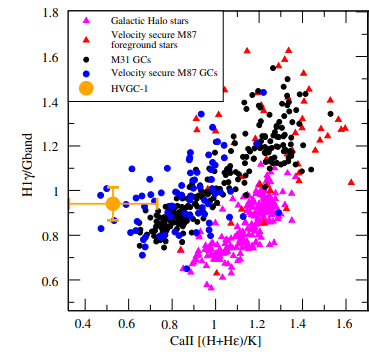 Figure 3: A diagram showing the relative strengths of hydrogen and calcium spectral lines for globular clusters and Galactic halo stars. HVGC-1 appears in a position characteristic of many globular clusters orbiting M87, distinct from the other groups of objects. Image adapted from Figure 3 in the paper.

Close encounters of the supermassive kind

One question remained: Why was HVGC-1 moving so quickly? Several possibilities could be eliminated fairly quickly. The cluster’s radial velocity was far too high for it to be in the tail of objects which are normally stripped from a galaxy through billions of years of mergers and close encounters. It was also unlikely to have been produced via interactions between M87 and a nearby clump of dark matter, known as a subhalo. Finally, the authors excluded a third possibility – that HVGC-1 was a hypercompact stellar system consisting of a supermassive black hole surrounded by a tight group of stars – on the basis of the high radial velocity and the internal motions of the star cluster.

While astronomers don’t know whether or not M87 has ever contained an SMBHB, it’s possible that other types of three-body encounters could produce the same result. Considering the recent groundbreaking observations of the central black hole of M87 by the Event Horizon Telescope, it’s possible we could learn quite a lot about the center of the galaxy – shining light on the first known hypervelocity globular cluster in the universe.