It’s Black History Month in the U.S., February 2021! We will be continuing our ongoing series #BlackInAstro this month. For our cornerstone post, see here. 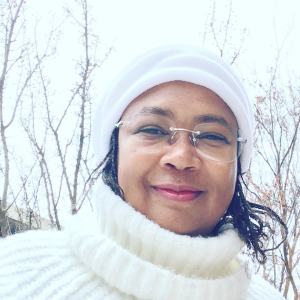 Dr. Jarita Holbrook is an expert on both African Indigenous astronomy and the culture of astronomy itself. These days, they describe themself as more of a social scientist: specifically, they spoke about finding their place in anthropology of science. “I found that anthropologists were very warm and open and that [..] what you embodied was important for anthropology… the fact that I was an African American woman who had traveled around the world that actually had experience living in Africa and living in the Pacific before was all very relevant to my career as an anthropologist going forward. My identity was not left at the door, my previous life experiences were not left at the door, it was integrated into my success as an anthropologist of science.”

Cultural astronomy is an interdisciplinary field concerned with the many different ways of perceiving and conceptualizing objects in the sky. It’s a lesser-known branch of astronomy, and Dr. Holbrook couldn’t recall the first time they had become aware of it. “I can’t even remember the first time I heard about cultural astronomy. But it wasn’t clear how you [did it or] if it was a path that was viable: there were no classes, no degree programs, or anything like that. But basically, when I was a graduate student the racism against me was so bad that I was like: this is ridiculous, they act like Black people are not interested in the sky and have never looked up. And so as I was finishing my Ph.D. I was becoming angrier and angrier with astronomers and I totally did not trust them with my career.” Dr. Holbrook further elaborated that this is a very common feeling amongst people of color in racist conditions, which are not confined to academia or astronomy specifically. In particular, people of color can never be sure whether critiques of their work stem from the quality of the work itself or simply from the racism of the critic. “So I wanted to become an expert on African Indigenous astronomy because I knew that there’s a lot of information about Africans and to their relation to the sky—it’s just nobody is promoting it or talking about it.”

Continuing, Dr. Holbrook spoke about the allure, but also the difficulty of pursuing a career in cultural astronomy: “So cultural astronomy is like the dark side of the force [….]: it’s infinitely seductive, but it’s not a way to make a career.” Despite the difficulty, Dr. Holbrook has been incredibly successful at it. “I do amazingly fun things today. At the end of the month I’m giving an event online for free: Two-Eyed Seeing: African Cultural Astronomy and NASA Moon 2 Mars. The activity is to rename a few NASA things with African names.” Dr. Holbrook doesn’t focus on a singular culture within the vast continent of Africa in their research (for just one example of their work, see this bite); rather, for an event such as this they will be looking at various stories about the Moon. “I get to go through my database, which is probably the biggest collection of African cultural astronomy articles and books in the world—yeah, that’s why I’m the expert,” they explained with a smile. Dr. Holbrook has also made films about cultural astronomy (check out their imdb page!), as well as many YouTube videos about astronomy and being an astronomer.  “On any given day I could be doing that kind of work or I could be studying astronomers.”

The Culture of Astronomy

These days, when Dr. Holbrook studies astronomers, it is for their Marie Sklodowska Curie Fellowship funded project, ASTROMOVES. Primarily based on interviews with Europe-based astronomers, the ASTROMOVES project is shedding light on how constantly having to move for employment in the field impacts astronomers of different genders unequally. Dr. Holbrook themself has lived and worked in various parts of the world, including the US, Fiji, South Africa, and most recently Scotland. Speaking about their experience of living abroad, Dr. Holbrook described a large shift in social dynamics. “In South Africa, I really got to experience white privilege for the first time: walk into the room, they hear my American accent, everyone assumes I’m smart. Nobody tries to like shoot me down or shut me up […] because I have an American accent, I have all these fancy American degrees.”

They further underlined how insidious the racism and negative images of affirmative action are in the US, where “they would much rather question how good an entire school is because they graduated a Black student who doesn’t conform to their ideas of who can be smart” than view the student as an expert. However, they underlined that their newfound privilege came at the expense of local Black folks who were not treated with the same respect, both in South Africa and the UK: “My privilege was at the expense of the local Black people and it’s the same thing here in the United Kingdom […] you see this pattern of their welcoming every other Black person from anywhere else, but not their own.”

In their work on Survival Strategies for African American Astronomers and Astrophysicists, Dr. Holbrook identified good mentoring as a key ingredient to counteract the toxicity of racist spaces in astronomy. “The nice thing is if there’s a student of color who’s got a good mentor they never come knocking on my door. […] So I know that good mentors are out there because a whole bunch of people of color in astrophysics haven’t come and knocked on my door.” Those that do knock are warned about the persistence of the same issues that exist in broader American culture within American astronomy: “You need to have a sword in one hand, and a spear and the other, and then you go in strong because you know you’re not going to not experience racism or sexism.”

Looking Back and Looking Up

While Dr. Holbrook was very clear that they do not think racism, sexism, and discrimination have been expunged from the field of astronomy, they do think that the field has changed. “It has changed in that the students are smarter and they’re demanding better treatment; […] I feel like the graduate students now are more empowered than we were… they know the terms: they know what intersectionality is, they know what gaslighting is, they know what sexual discrimination looks like… And I totally give credit to the American Astronomical Society for bringing these issues and letting them be the things that are talked about at their meetings… things like imposter syndrome, stereotype threat, these are all very social science terms that have become part of the language which the graduate students can speak.”

Dr. Holbrook will be hosting Two-Eyed Seeing: African Cultural Astronomy and NASA Moon 2 Mars this morning, 11:30 EST/10:30 CST/9:30 MST/8:30 PST. Tune in to draw parallels about celestial twin deities in Greece and Benin, learn about the overwhelmingly female representations of the Moon and its astrochemistry, and perhaps even gain insight into the next NASA mission’s name through talking about African Thunder gods!