Have We Found the Closest Extragalactic Fast Radio Burst?

Title: A nearby repeating fast radio burst in the direction of M81

Fast radio bursts (FRBs) are some of the most mysterious phenomena in radio astronomy. First discovered in 2007, these short but energetic bursts of radio waves last on the order of milliseconds. In the intervening decade, catalogs of FRBs have grown to include sources of repeated bursts, bursts whose host galaxies have been identified and even an FRB-like burst of radio waves within the Milky Way. Each year brings more tantalizing new discoveries.

There is not yet a consensus on the mechanisms behind FRBs. In recent years, new bursts have allowed astronomers to rule out certain burst models and lend credence to others. For example, neutron stars with extremely powerful magnetic fields, called magnetars, are currently a leading candidate, while studies of FRB environments indicates that indicate that gamma-ray bursts and some supernovae are less likely to be responsible. Ideally, finding FRBs close to Earth would allow us to narrow down the possibilities even more. Today’s paper presents the discovery of an FRB that has the potential to do just that.

One of the premier instruments for detecting FRBs is the interferometer on the Canadian Hydrogen Intensity Mapping Experiment (CHIME), which saw first light in 2017. As of early 2020, the CHIME/FRB project had already detected hundreds of bursts, including several repeating sources. One of those bursts, designated FRB 20200120A, would be followed by two more from the same location by the end of 2020. Maintenance on CHIME meant that the second burst yielded little information, but the first and third bursts raised some eyebrows for two reasons.

Figure 1: CHIME/FRB was able to detect three bursts from 20200120, occurring in January, July and November of 2020, respectively. The left-hand side shows plots of intensity data; the right-hand side shows plots of baseband data, a record of the voltage measured by the telescope, which is useful for localization. Maintenance in July meant baseband data could not be recorded for the second burst. The white bands are regions where interference from artificial sources had to be removed. Figure 1 in paper.

A fast radio burst in the neighborhood?

First, they exhibited surprisingly low dispersion measures for FRBs, at around 87.82 pc/cm3. Dispersion measures (DMs) describe how different frequencies in a radio signal are smeared out through interactions with free electrons in outer space. A higher DM means that there are more free electrons between us and the source, making DMs a convenient distance proxy. The DMs of each of these bursts placed them in an as-yet unexplored regime – neither firmly within the Milky Way nor firmly in extragalactic space. Second, the bursts were successfully localized to an area close to the galaxy M81, which on cosmological scales is just down the street from us. The localization region – the area where the astronomers are 90% confidence the source lies – is large but overlaps with the galaxy as seen from Earth.

A radio source within the Milky Way’s disk along the line of sight to this repeating FRB (now referred to as FRB 20200120) would have a DM of no more than 40 pc/cm3 – far too low to match observations. Constraints on the electron density in the galactic halo, however, are much worse, with halo DM contributions ranging from as little as 30 pc/cm3 to as much as 80 pc/cm3. With the measured DM in this range, the bursts could indeed be coming from a halo object like a magnetar. From an astrophysical perspective, though, this would be odd; neutron stars are unlikely to be found in halos, and many are incapable of producing bursts this bright. 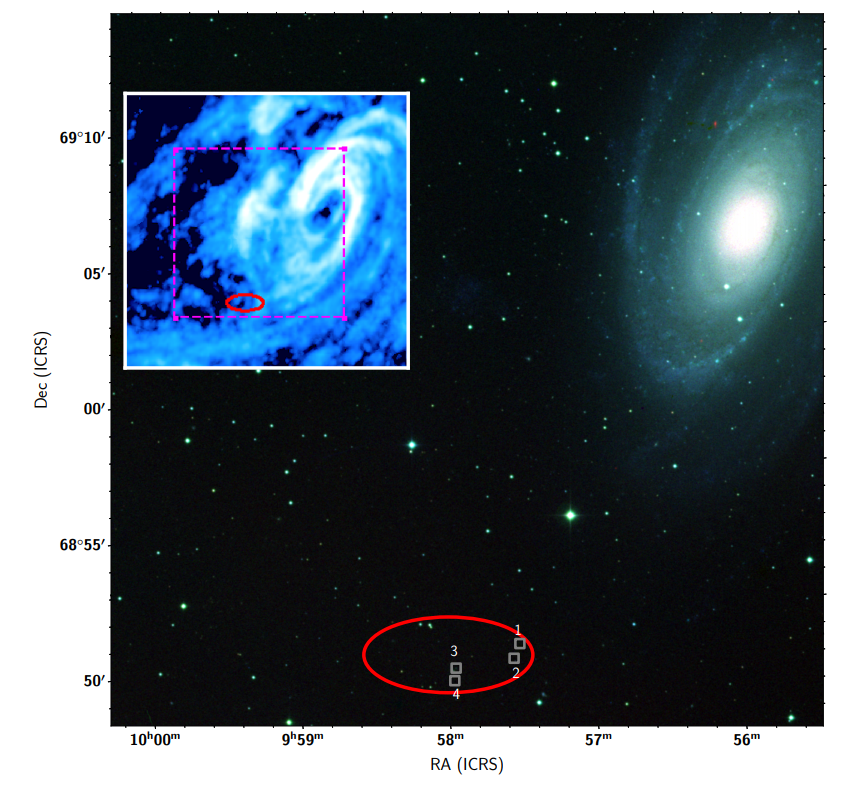 Figure 2: The 90% confidence localization region of FRB 20200120 is shown in red superimposed on a Digital Sky Survey (DSS) image of the surrounding sky. Although it appears to be far from M81, at upper right, it is actually still located in the galaxy’s thick disk, which is shown more clearly by the inset map of 21 cm emission. The dotted lines correspond to the border of the DSS image. The labeled boxes within the localization region show the positions of the four known sources of interest in the area, which could be associated with the FRB. Figure 3 in paper.

This makes the extragalactic hypothesis more appealing. If we assume a relatively low halo DM, then we have an excess of 18-23 pc/cm3, which could be accounted for by electrons in the intergalactic medium between the Milky Way and the source’s host galaxy, placing the host fairly close to us. The best candidate appears to be the M81 group of galaxies, which lies a mere ~3.6 Mpc from Earth and encompasses the large localization regions of the two well-studied bursts from FRB 20200120. In fact, the projected distance between the source and the center of M81 itself could be only 20 kpc, well within the galaxy’s disk. The authors estimated that the probability of a purely chance alignment between the galaxy and the source is roughly 1%.

A toast to the host 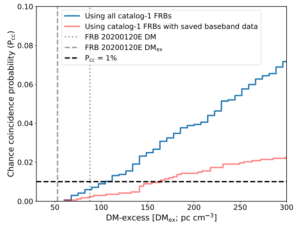 Figure 3: The probability of an FRB randomly intersecting a galaxy like M81 depends strongly on the FRB’s DM excess. For a DM like that of FRB 20200120, this probability ends up being 0.7%. Figure from paper.

M81 is an exciting candidate host galaxy because of previously known activity within the FRB’s localization region. While no Milky Way satellite galaxy or globular cluster is along the line of sight to FRB 20200120, M81 has an HII region, a globular cluster, an x-ray source and a persistent radio source within the 90% confidence region – in other words, places where you might find a fast radio burst. There are nearby star-forming clumps, where massive stars – including many neutron star progenitors – are being born, so it could be a ripe environment for FRBs.

This isn’t to say that M81 is typical of an FRB host galaxy – it’s a massive early-type galaxy with an active galactic nucleus, which sets it apart from the other three known host galaxies of FRBs. Furthermore, a 20-kpc separation from the galaxy’s center would be the largest projected offset between and FRB and its host. That’s unusual – most magnetars and other theorized FRB sources lie near the centers of their host galaxies, or at least well within their disks.

FRB 20200120 is a tantalizing target for follow-up observations thanks to its proximity to Earth. Some FRB models predict that radio bursts should be accompanied by additional activity across the electromagnetic spectrum. If a magnetar is responsible for the bursts, it might be possible to detect a high-energy counterpart with existing x-ray or gamma-ray telescopes like the Swift Observatory. Such a detection would be an important leap in our understanding of fast radio bursts, particularly bursts from repeating sources.