A Brown Dwarf in the Desert

Status: Accepted to A&A [not yet published, access unknown]

Brown dwarfs are typically defined as objects with masses between 13-80 times that of Jupiter, or 0.013-0.08 times that of the sun. They are too low in mass to fuse hydrogen into helium and become main sequence stars (thus labelled “substellar”), but they are massive enough to fuse deuterium, which sets them apart from giant planets. This deuterium burning phase is relatively short-lived (roughly 4-50 million years), after which brown dwarfs fade in luminosity and appear in many ways similar to high-mass planets. Because deuterium burning does not have a major effect on a brown dwarf after very early stages of its existence, some astronomers prefer a different definition to set apart brown dwarfs and planets, in which brown dwarfs form like stars, and planets form in disks around stars. I stick to the mass definition of brown dwarfs in this post because that is a property we can measure, whereas formation mechanisms can be difficult to determine.

The “brown dwarf desert” refers to the fact that very few brown dwarfs have been found closely (at less than a few AU) orbiting stars, contrasting with the many hot Jupiters, or high mass planets orbiting very closely to their star, that have been found. Figuring out the cause of this desert is essential to understanding how brown dwarfs form. Three categories of possible brown dwarf formation mechanisms can be summarized as the following:
1) It forms like a single star; a molecular cloud core collapses into an isolated object.
2) It forms like a member of a binary or other multi-star system; a collapsing molecular cloud core fragments to form multiple objects.
3) It forms like a planet; matter gathers from gravitational fragmentation or core accretion in the disk surrounding a young star.

Parviainen et al. (2020) reported the discovery of a unique substellar object, TOI-263b, with the Transiting Exoplanet Survey Satellite (TESS). TESS uses the transit method for finding exoplanets, where the dimming of a star as a planet (or brown dwarf) passes in front of it allows for the measurement of the orbiting object’s radius. The system’s host star (TOI-263) is an M3.5 dwarf, a low-mass, cool main sequence star. Observed transit curves for TOI-263b are shown in Figure 1. The team measured a radius in the range of 0.44RJup < R < 1.41RJup, where RJup is Jupiter’s radius, and an extremely short orbital period of 0.56 days for the transiting object. Due to the object’s size, it was predicted to be either a giant planet or a brown dwarf, but radial velocity measurements were required to determine its mass.

Palle et al. (2021) followed the system up with the ESPRESSO spectrograph using the radial velocity method, studying the motion of the star due to its companion’s gravity in order to measure the companion’s mass. Figure 2 shows the observed radial velocities and the best-fit Keplerian orbital model for the system. The team measured a mass of 61.6±4.0Mjup, where Mjup is Jupiter’s mass, and validated the 0.56 day orbital period. 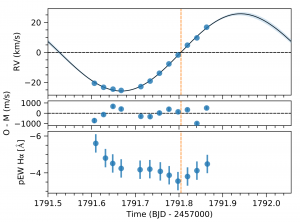 With the spectroscopic observations, properties of TOI-263 (the host star) were also studied. Its rotational period was determined to be 0.56 days, indicating synchronization with its brown dwarf companion’s orbit. This indicates interaction between the star and brown dwarf that affected the stellar rotation and that the star is active.

An Extreme Inhabitant of the Brown Dwarf Desert

Only about 25 brown dwarfs closely orbiting stars (with periods less than 100 days) have been found with the transit and radial velocity methods, and TOI-263b has the shortest orbit of them all. Figure 3 shows TOI-263b in context with all confirmed exoplanets and brown dwarfs discovered with the transit method and with radial velocity measured masses. TOI-263b is isolated in this space, except being close to NGTS-7ab in mass-period space. 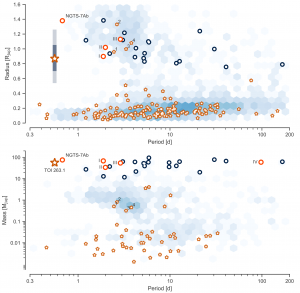 Figure 3: TOI-263b in period-radius (top) and mass-radius (bottom) context with all exoplanets and brown dwarfs discovered with the transit method and with radial velocity follow-up. TOI-263b is marked by the larger star symbol with gray error bars. Blue shading indicates the density of known planets. Planets and brown dwarfs around cool (T < 4000K) stars are marked with red stars and circles, respectively. Brown dwarfs around hotter stars are marked with black circles. (Figure 7 in the paper)

TOI-263b is only the sixth brown dwarf discovered around an M dwarf, and it has the shortest orbital period of any known brown dwarf around any type of star. A brown dwarf orbiting an M dwarf with a 0.56 day period is difficult to understand in terms of formation history. And, due to the spin-orbit synchronization, its dynamical history is unknown. Based on the mass ratio between the M dwarf and its substellar companion, the authors suggest that the formation mechanism must have been either number 2 mentioned above, core fragmentation during star formation, or 3, fragmentation in the formed star’s disk, followed by migration inward to the close orbit observed. This extreme and unique system presents an exciting environment for further study to better understand brown dwarf formation.