A colorful image of a black hole

M87 is a galaxy of extremes – it is one of the brightest radio sources in the entire sky, one of the nearest galaxies that has a relativistic jet emitted from its nucleus, and one of our nearest extragalactic neighbors (a measly 53 million light-years away, in the Virgo Cluster). Also, in 2019, M87 made the news for hosting the subject of the first ever image of a black hole “shadow” (check out the Astrobites coverage of that historic event here).

This first direct image of a black hole at the heart of M87 was taken by the Event Horizon Telescope – a global interferometric network of radio dishes that granted the unprecedented resolution necessary to image the subtle structures surrounding the black hole. While this image provided us with invaluable information about black holes, there is still a significant amount of uncertainty on some of the characteristics of the pictured black hole, including details such as its exact spin and magnetic field configuration.

A difficulty, however, is coordinating these observations. The emission from super massive black holes (SMBHs) and the jets that they launch – such as the one in M87 – is known to fluctuate on timescales of a few weeks. Thus, to get a complete snapshot of a SMBH, you want to look at it in many wavelengths at roughly the same time. This is exactly what the authors of today’s paper accomplished.

This coordination of telescopes was no small feat. In total, 17 telescopes across as many orders of magnitude in frequency (from 1 GHz to

GHz) came together to image the nucleus and jet of M87 in 2017. The schedule of the different observations from each telescope is displayed in Figure 1. 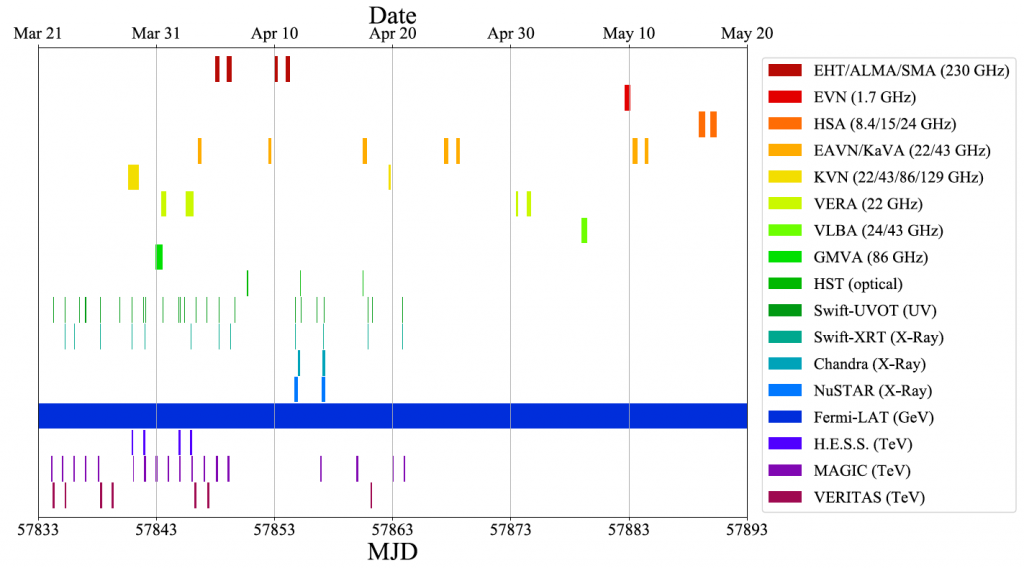 Figure 1. Schedule of when each telescope was observing M87 in 2017. The telescopes are ordered by frequency, with red being the lower frequencies (radio). Fermi-LAT normally operates in a survey mode, which is why there is data from every day. Figure 1 from today’s paper.

Finding a time for observations isn’t the only difficulty. Different telescopes have different sensitivities, and the types of technologies used to search for, say, X-rays, is drastically different than that needed to detect radio waves. Additionally, the different telescopes have drastically different fields-of-view and hence probe different spatial scales. For example, interferometric radio observations can pick up subtle structures in the active galactic nucleus (AGN) and can even distinguish features within M87’s jet. On the other hand, gamma ray telescopes have a much worse spatial resolution, and, while they are able to detect emission from the AGN, cannot distinguish emission from the region around the black hole from emission that is farther down the barrel of the jet. A compilation of the images of M87 in various wavelengths, highlighting the different angular scales, is shown in Figure 2. 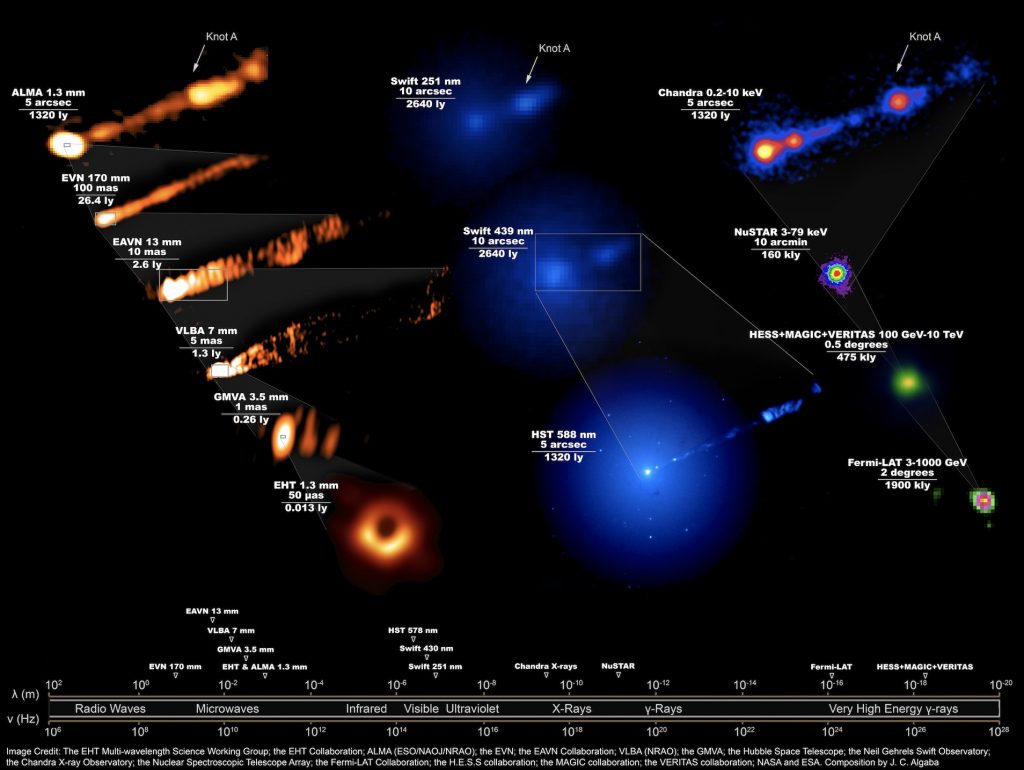 Figure 2. Compilation of the near-simultaneous observations of M87. Note the different angular scales, and how some of the radio observations on the left are able to differentiate features in the jet, whereas gamma-ray observations (right) cannot discriminate between these features. Similar to Figure 13 from today’s paper, but this version includes the gamma-ray data.

With all of these observations in hand (or rather, on hard drives), the authors of today’s paper tried to figure out what can be inferred about the physical properties of M87 and its jet. One way to do this is by comparing the amount of energy emitted in different wavelengths, which can be put together into a “spectral energy distribution” (SED). SEDs can be extremely informative, because different physical processes result in emission at different energies, which correspond to different wavelengths.

For example, if there are electrons in the jet, then they will emit synchrotron radiation as they spiral around magnetic field lines. This causes a bump in the SED in radio frequencies. Some of the synchrotron radiation can then actually interact with the same electrons, and get scattered up to very high energies, which can cause another bump in the SED at very high energies. Different predictions for e.g. the distribution of electrons or the magnetic field strength will change the locations and magnitudes of these “bumps,” and so we can use the SED to infer characteristics about the composition of the jet. The SED from M87 is shown in Figure 3. 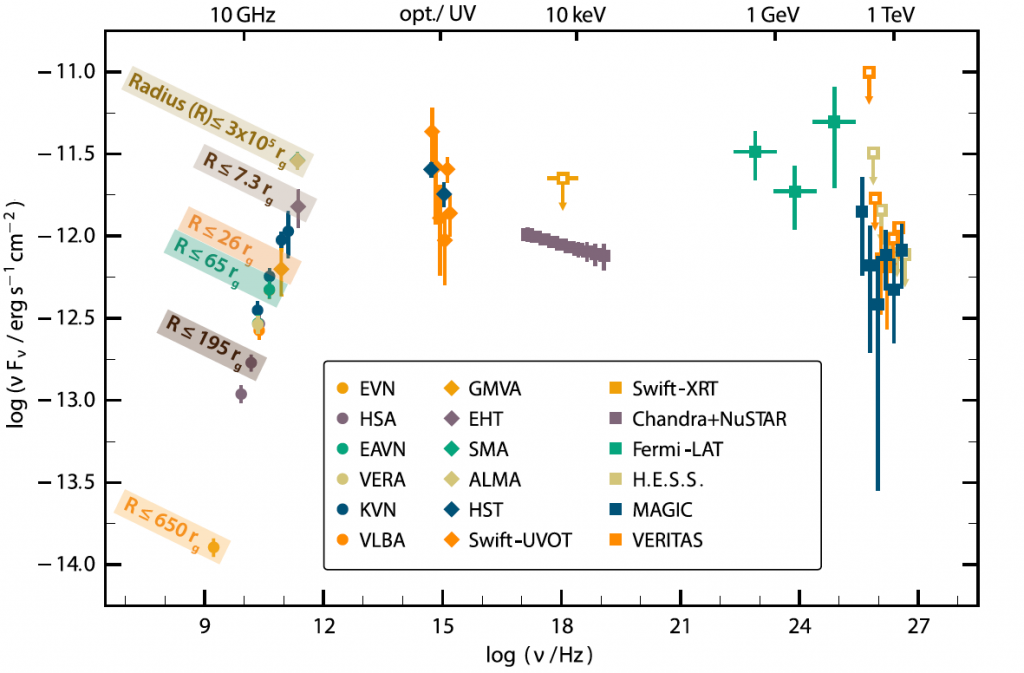 Figure 3. Broadband spectral energy distribution (SED) of M87 from 2017. The SED represents the amount of energy arriving at Earth in each of these frequencies. Different features in the SED can reveal valuable information about the environments producing the emission. Figure 16 from today’s paper.

From a deep look at M87’s SED, the authors come to the conclusion that a simple model of the emission – one that treats all of the emission as coming from the same location in the jet – cannot explain the entire SED. This lends evidence to the hypothesis that M87’s jet must have a more complex structure, and that the very high energy gamma rays might be originating from a different region of the jet than the emission at lower frequencies.

Not only are the scientific takeaways from this work extremely informative, but it represents a massive success in uniting some of the most advanced telescopes in the world to create one of the most detailed snapshots of an AGN to date. These observations will serve as a cornerstone for future observations of M87, which will revolutionize our understanding of black holes and relativistic jets.

When the Sky Isn’t the Limit: Simulations of Imaging a Black Hole from Space

The First Image of a Black Hole