Title: The bursty origin of the Milky Way thick disc

When you think about galaxies, it’s quite likely that the first picture that enters your head is one of a beautiful spiral galaxy, with spiral arms snaking out from its centre, embedded in a disc of gas and stars. These galaxies are fairly common across the Universe, but their structure is more complex than first meets the eye.

Most spiral galaxies have two main components. At the centre of each spiral galaxy lies a central “bulge” of stars, a roughly spherical region of tightly-packed stars. This is surrounded by a “disc”, a flat, circular region containing stars, gas and dust.

In recent years though, it has become apparent that the disc of a spiral galaxy can be broken down into two more components: a “thick disc”, and an enclosed “thin disc”. Figure 1 shows a diagram of these components: the thick disc contains older, more metal-poor stars than the thin disc, and is typically 2-3 times thicker. But where did these two discs come from, and why do they contain different types of stars? Today’s paper from Yu et al. tries to answer this question for the Milky Way.

What came first, the thick disc or the thin?

A prevailing theory for this disc dichotomy has been that spiral galaxies form a thin disc early on, without a thick disc component. Many galaxies experience minor galaxy mergers over their lives, where a smaller dwarf galaxy crashes into the larger one. This can disrupt the thin disc of the main galaxy, throwing some of its stars into eccentric orbits and “puffing” the disc up, to form the thick disc. If it seems far-fetched that a dwarf galaxy could have such an impact on a large galactic disc, imagine throwing a golf ball into a dinner plate — a single collision can have a significant effect on a fragile disc.

However, Yu et al. argue that, at least within the Milky Way, the different types of stars in the thick and thin discs cannot be explained by a merger. The authors use computer simulations of 12 galaxies that are similar in size and shape to the Milky Way. These simulations allow us to look back in time at how galaxies have grown and changed, and to learn about what processes in the Milky Way’s past might have led to the way it looks now.

The authors find that the first stars in their Milky Way simulations formed a thick disc. Then, after several billion years, a transition occurs and stars begin forming in a thin disc. This contradicts the idea that the thick disc formed by a dwarf galaxy jumbling up the thin disc, but what makes their results particularly interesting is that they find another transition that occurs at the same time.

Star formation through thick and thin 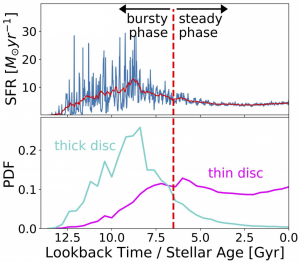 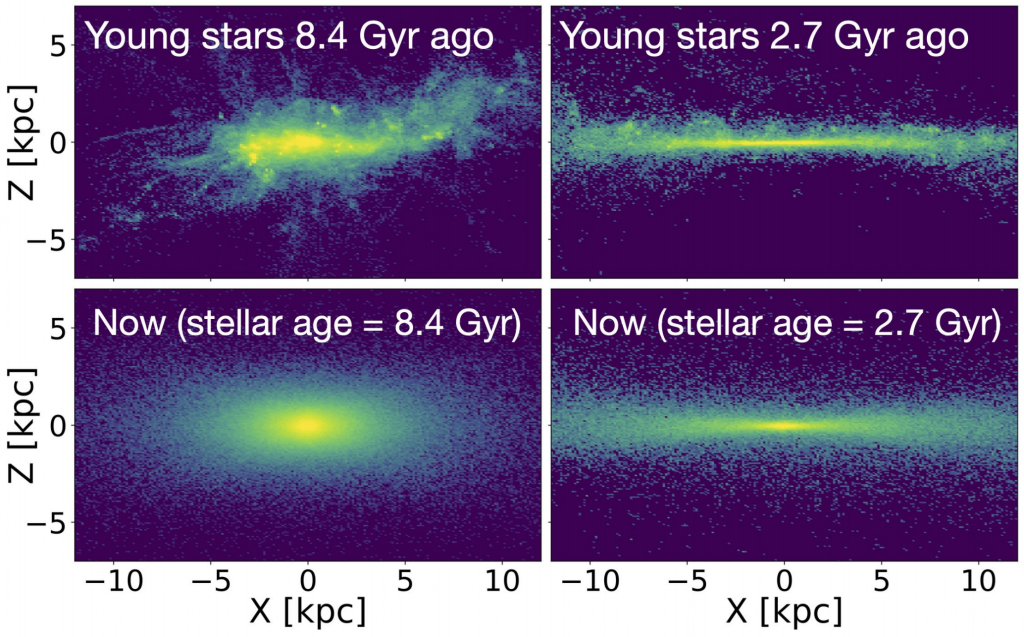 Figure 3: Edge-on view of one Milky Way simulation. Top row: Regions of high star formation during bursty phase (left) and steady phase (right). Bottom row: Positions of these stars in the galaxy at present day. Stars that formed in the bursty phase now make up the thick disc, and those forming in the steady phase make up the thin disc (adapted from Figure 3 in today’s paper).

Interestingly, three of the galaxies experience minor mergers after the thin disc has formed, during the steady phase. However, these events only have a very small effect on the disc structure. This work argues that minor mergers certainly don’t have the power to form a thick disc by themselves, which has major implications for what the important processes in disc formation are.

The authors finish by explaining that the transition from bursty to steady star formation also correlates with changing properties of the circumgalactic medium, the gas that floats around near a galaxy but outside of its discs. At early times this gas is turbulent, clumpy, and experiencing shocks. Then at later times, this gas becomes “virialised”, meaning it can flow smoothly and allow stars to form at a steady rate. This transition occurs — you guessed it — at the same time as the bursty-to-steady transition, and the thick-to-thin transition!

This work provides a great explanation for how the thick and thin discs of the Milky Way might have formed. Whether the discs of other spiral galaxies could also form in this way is still an unanswered question, but one that we can look forward to answering in the near future, so watch this space!