Title: Kraken reveals itself – the merger history of the Milky Way reconstructed with the E-MOSAICS simulations

Just like archaeologists can trace the migration and assimilation of people in past societies, astronomers can reconstruct the assembly history of the Galaxy that we live in. In standard galaxy formation theory, galaxies like our Milky Way formed through the hierarchical merging of many smaller galaxies. According to this picture, some of the stars and star clusters in our Galaxy were not originally born here, but are “immigrants” that were brought into the Milky Way when their parent galaxy entered. Galactic archaeologists are developing techniques to trace back the origin of these galactic immigrants and reconstruct properties of the accreted galaxies. One avenue is through the stars that were left behind in a stream (see this Astrobite), but today’s authors study where the star clusters in our galaxy come from.

Globular clusters consist of hundreds of thousands of tightly bound stars, and they are both ancient (billions of years old) and stable. When a satellite galaxy is accreted into the Milky Way, its globular clusters are likely to survive and migrate as a whole. This makes globular clusters excellent fossil records, because they preserve the metallicity of the environment in which they formed and carry this signature wherever they travel. 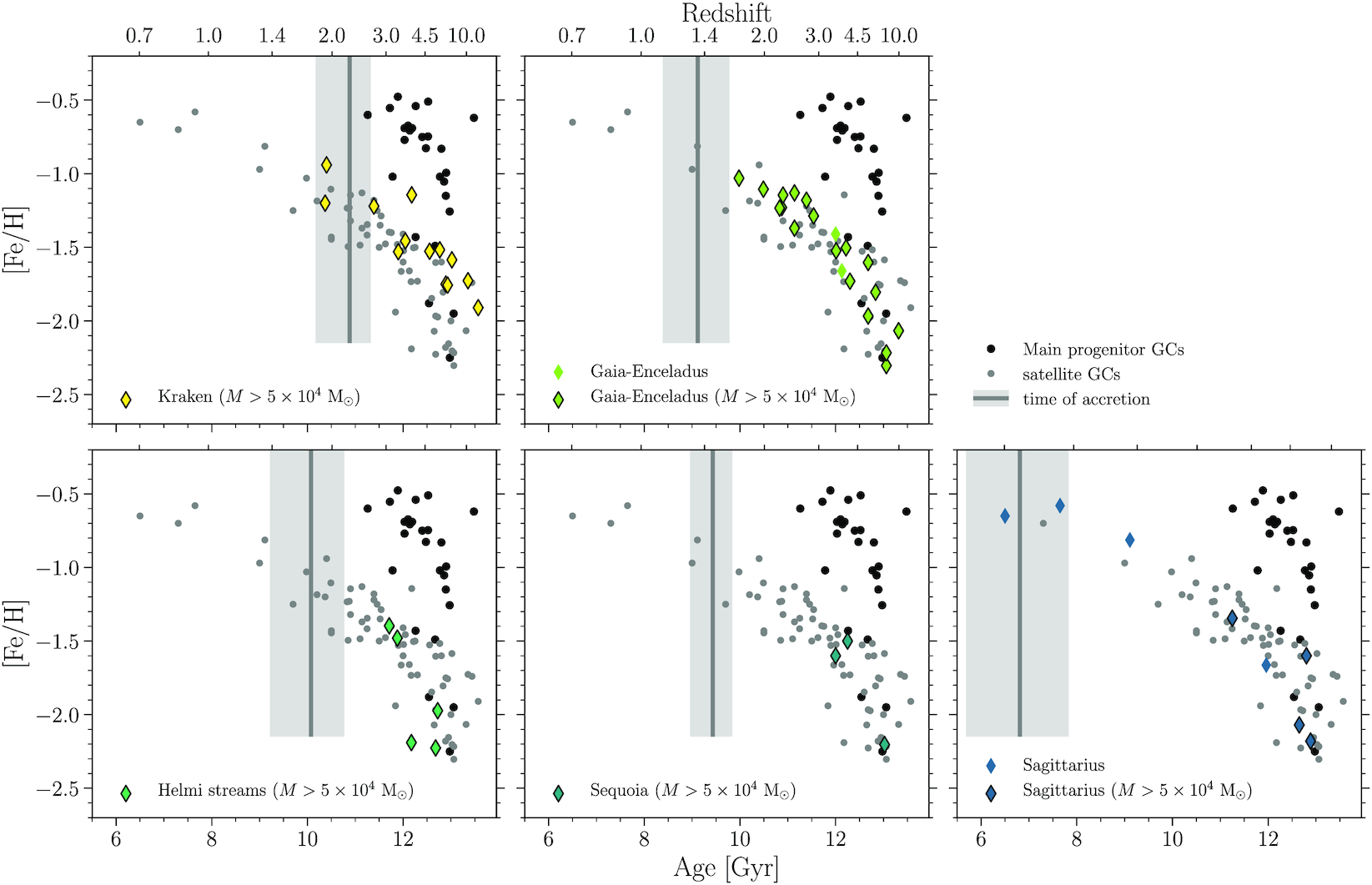 Accretion history of the Milky Way

After applying the artificial neural network, the reconstructed formation history of the Milky Way is shown in Figure 2. This figure is called a galaxy merger tree because each branch (black and grey lines) represents one accreted satellite galaxy, and the branches are ordered by their accretion times. Kraken was the first galaxy to be accreted, followed by the progenitor of the Helmi streams, Sequoia and Gaia-Enceladus, and finally Sagittarius. 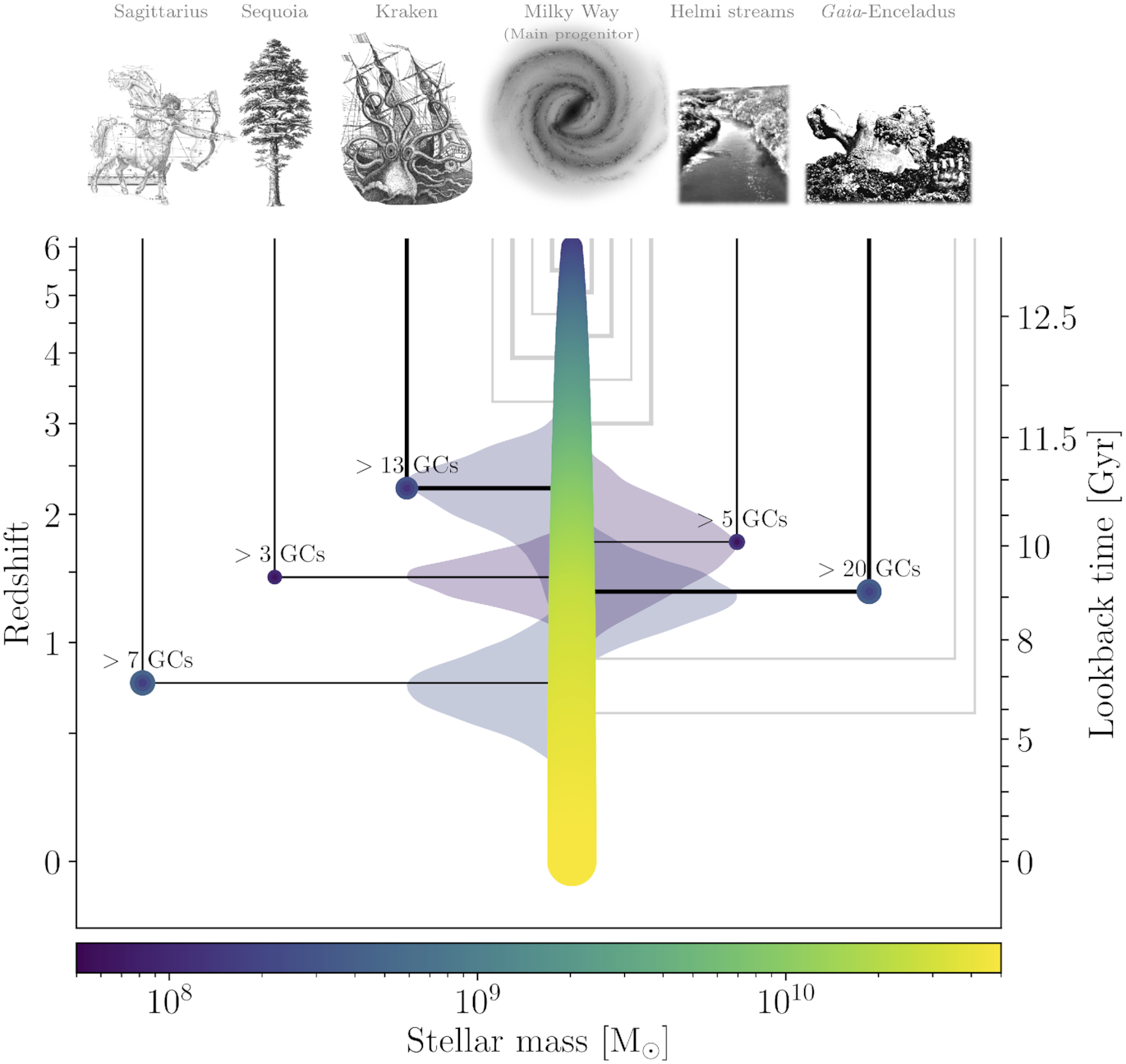 Figure 2. Galaxy merger tree of the Milky Way. The main progenitor is denoted by the trunk of the tree, coloured by stellar mass. Black lines indicate the five identified (and likely most massive) satellites, with the shaded areas visualizing the probability distributions of the accretion times. The coloured circles indicate the stellar masses of the satellite galaxies at the time of accretion. The annotations list the minimum number of GCs brought in by each satellite. From left to right, the six images along the top of the figure indicate the identified progenitors, i.e. Sagittarius, Sequoia, Kraken, the Milky Way’s Main progenitor, the progenitor of the Helmi streams, and Gaia-Enceladus. Reproduced from Fig 9 in the paper.

The “main progenitor” of the Milky Way is the trunk of the tree, and it grows in stellar mass each time it accretes a new galaxy. The thickness of the lines indicate the mass ratio of the accreted galaxy versus the main progenitor. As you can imagine, the more massive a satellite is, the more damage it causes when it combines with the Milky Way. In a minor merger (defined by mass ratios smaller than 1:4), the satellite is small enough for the Milky Way to comfortably absorb; however, in major mergers (where the two galaxies have comparable mass), both galaxies will be significantly disturbed and the Milky Way disk can even be destroyed. Luckily, the Milky Way never experienced a major merger according to the authors of today’s paper. Among the minor mergers, Kraken was the most significant merging event that the Milky Way experienced, since it has the highest mass ratio at the time of accretion.

From a Roar to a Whimper: The Star Formation History of Leo I