Dwarfs from ELVES: The structure of dwarf satellite galaxies

Dwarf galaxies are thought to be incredibly suggestible; there has been a range of diverse dwarf galaxies observed in our Universe indicating that they are extremely sensitive to their surroundings. The observed differences in sizes, shapes, and colours of dwarf galaxies is believed to be at least in part due to differences in the environment they inhabit. All galaxies are thought to be surrounded by a ‘halo’ of dark matter, see this astrobite for more details. Many dwarf galaxies are satellite galaxies, meaning that they are found in orbit within a larger host dark matter halo which also typically contains a larger central galaxy (for example, the Small and Large Magellanic Clouds are satellite galaxies, both in orbit of our own Milky Way). 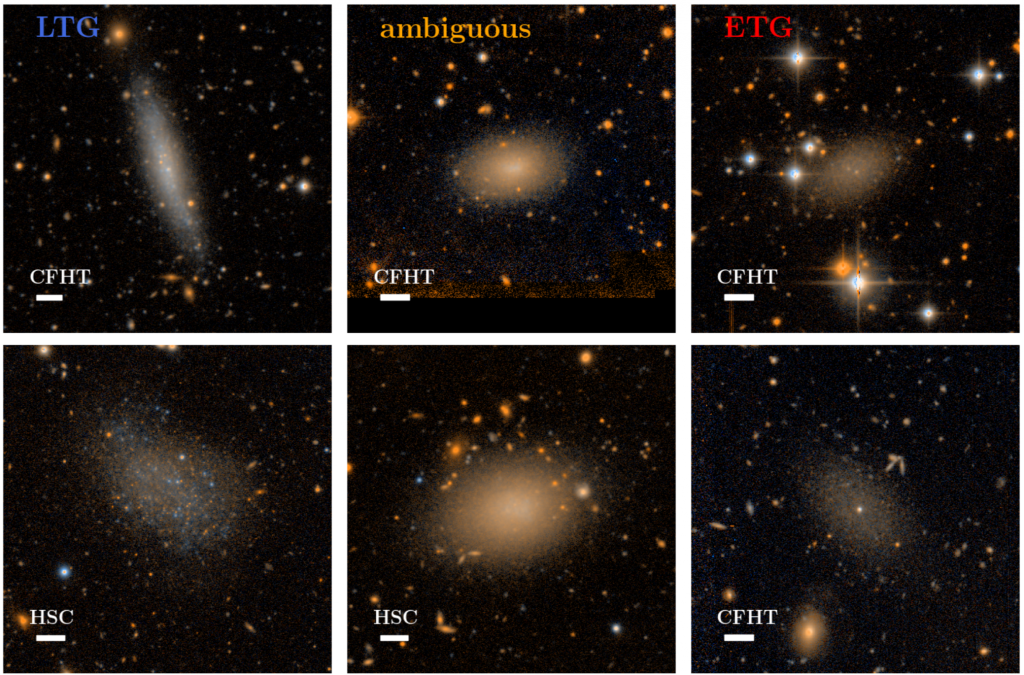 Figure 1. Examples of dwarfs visually classified as ‘early-type’ (ETG) and ‘late-type’ (LTG). Late-type dwarfs are irregular, with apparent active star formation throughout the galaxy while early-types are smooth and featureless without any star-forming clumps. Figure 1 in the paper.

Despite the observed diversity of dwarf galaxies, they can broadly be classified into two morphological types: late-type and early-type (see Figure 1 for examples). Late-type galaxies are typically star-forming, whereas early-type galaxies lack star-forming regions and appear smoother than late-types. Today’s paper uses the ongoing Exploration of Local VolumE Satellites (ELVES) Survey to investigate how the structural properties of dwarf galaxies can change depending on the environment and morphology of the galaxy. The galaxies in the ELVES sample are all within the Local (D<12 Mpc) Volume (LV), and are satellite galaxies in orbit of Milky Way-like halos.

Going from a Late-type to an Early-type?

The current picture of dwarf galaxy evolution suggests that early-type dwarfs are formed from late-type dwarfs interacting with a host halo. If this is the case, then early-type dwarfs can be thought of as dwarf galaxies in the last throes of their evolution, and any differences in characteristics of late-type and early-type galaxies could provide insights into the physical mechanisms behind this evolution (such as the removal of star-forming gas through ram pressure stripping). 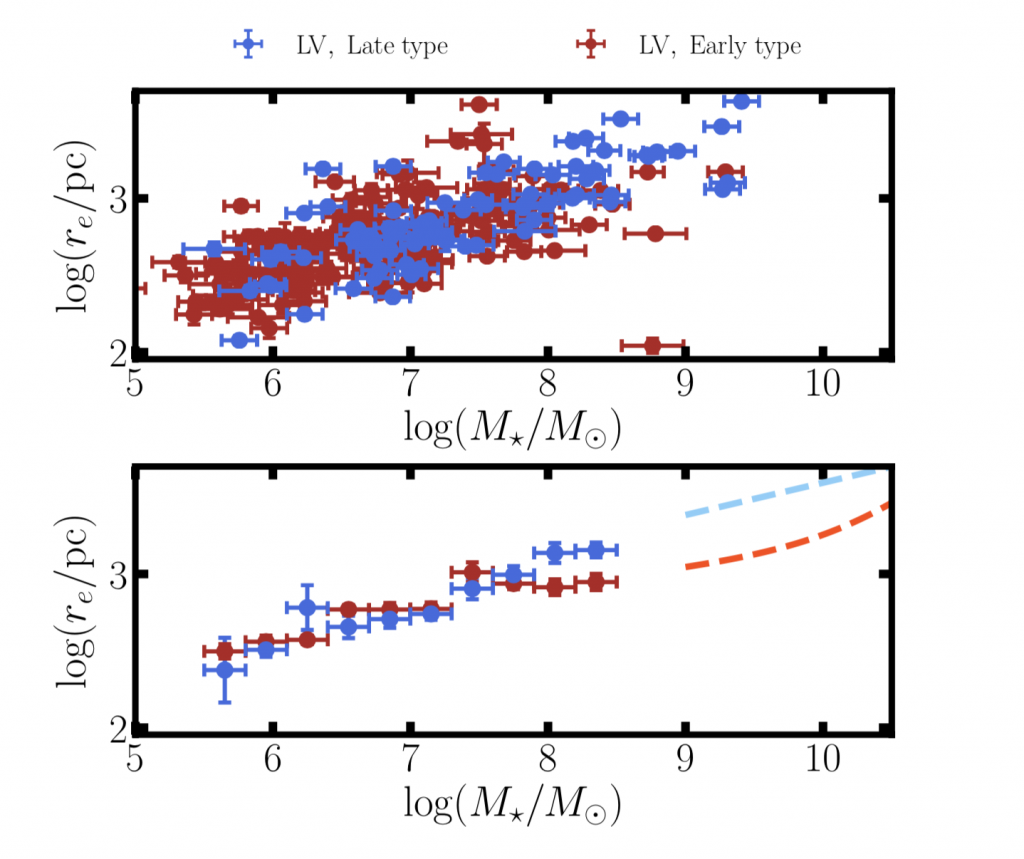 Figure 2. Log of effective radius against log stellar mass of the dwarf galaxies in the Local Volume (LV) sample. The upper panel displays points for each dwarf galaxy in the sample, with red indicating early-type and blue indicating late-type. The bottom panel shows average trends binned by stellar mass. The dashed lines show the mass-size relations for early-type (red) and late-type (blue) dwarf galaxies of higher stellar mass from the GAMA Survey. Adapted from Figure 3 in the paper.

To investigate whether there are any structural differences between early- and late-types, the authors plot the effective radius of the dwarf galaxies in their sample (essentially the galaxy’s size) by their stellar mass. It can be seen from Figure 2 that there is no significant difference between the early- and late-type galaxies at fixed stellar mass. This similarity between late-types and early-types suggests that the physical processes relevant in forming early-type galaxies (such as ram pressure stripping) do not necessarily induce any change in the galaxy’s size. These results indicate that the transformation process from late-type to early-type only requires only the removal of the galaxy’s star forming gas – significant structural change to the galaxy is not necessarily required. Also of note is the difference between the author’s results, where the sample is limited to dwarf galaxies with M* < 108.5M⊙ and results for satellite galaxies with higher masses (indicated by the blue and red lines in the bottom panel of Figure 2). The authors suggest that this difference hints that there is a characteristic stellar mass scale, above which additional physical processes may be required to explain the sudden difference in sizes between early- and late-types. 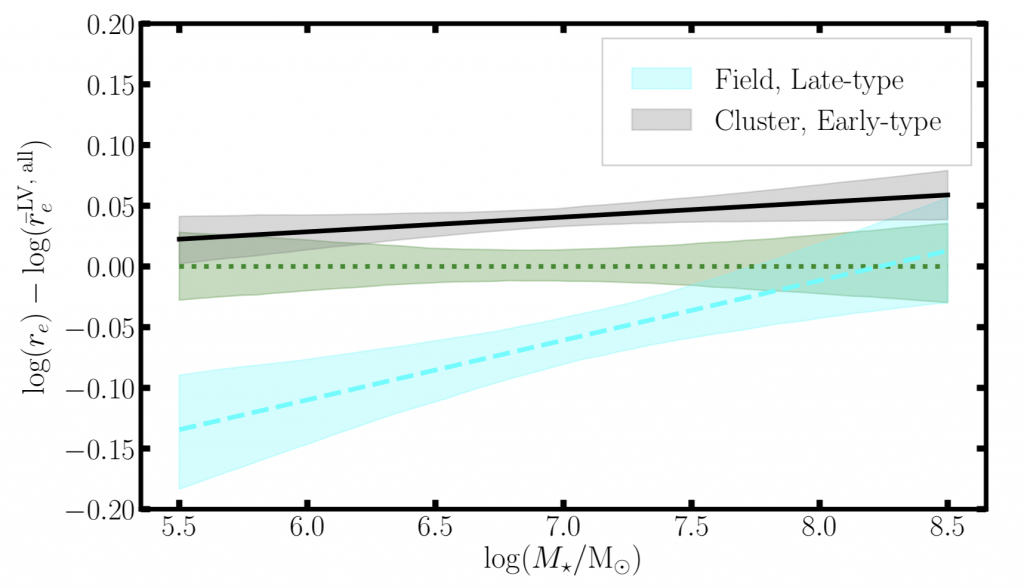 Figure 3. The mass-size relations of the cluster (grey) and field (cyan) dwarf samples normalized to the full Local Volume sample (green). At fixed stellar mass, the cluster sample is offset to larger sizes whereas the isolated field sample is offset to smaller sizes. Field galaxies are isolated dwarf galaxies that have been taken from an auxiliary sample, using additional observational data. Adapted from Figure 9 in the paper.

In conclusion, today’s authors are able to gain insights into the physics of dwarf galaxy transformation from late-types to early-types, and how these processes vary between the Milky Way-like and cluster environments. The authors comment that a comparison with simulations will be useful in constraining the physics of how dwarf galaxies evolve, their observational results have quantified the start and end points of the transformation, simulations may be able to tie them together to tell the middle part of the story!

Hunting for stellar splashback: defining the size of a galaxy cluster