Keeping Time in the Milky Way with Chemical Clocks

Title: The consistency of chemical clocks among coeval stars

Stellar age is an extremely valuable parameter to constrain because it introduces time into our study of astronomical objects.  Pairing the observed properties of stars with time opens up a rich new dimension in the study of our Galaxy and beyond.  For example, when we pair stellar age with stellar kinematics, we can dynamically trace stars back to their birth locations to study things like Galactic evolution and star formation in detail.  When we consider stellar age in our study of exoplanets, we can peer into the planet formation and evolution process.  When we pair stellar age with stellar chemical abundances, we can trace the evolution of specific elements over time in the Galaxy.  Weaving time into these various analyses opens up a new realm of insight that enhances our understanding of the Universe.  However, with this all said, stellar age is extremely difficult to constrain.

Stellar Ages are Hard to Determine

Some methods of constraining stellar ages include using photometry, dynamics, gyrochronology, and the abundances of individual elements like lithium in stars.  For example, the locations of stars on the color-magnitude diagram (CMD), which are determined by photometry, can hint at stellar age.  Many stellar and Galactic astronomers fit isochrones, lines of constant age in the CMD, to the photometric data of a single or group of stars to estimate their age.  However, this method relies on very well-constrained dust parameters between the observer and the object.  Gyrochronology, using stellar rotation to estimate age, is another effective method, but it requires knowledge of the inclination of the star, something that is often difficult to determine.  We can also use lithium abundances to estimate stellar age.  Lithium, however, is only an effective age indicator in young stars with convective envelopes.  As you can probably tell, there are tons of ways to estimate stellar age, but they all suffer from various limitations and uncertainties.

An interesting, and somewhat new, avenue for probing stellar age is through the use of chemical clocks.  Chemical clocks are sets of elemental abundance ratios that have been observed to track with stellar age.  The idea behind chemical clocks is rooted in the notion that different families of elements are expelled into the interstellar medium (ISM) on different time scales (see Figure 1).  For example, elements like Mg, Al, and Ti that are produced in dying massive stars, which live short lives that end in core-collapse supernovae, follow much different timescales than elements like Ba and Y produced primarily in low-mass stars, which have much longer lifetimes and subsequently take longer to spread their nucleosynthetic products out into the ISM.  This means that the ratios of various abundances in the ISM are constantly changing.  When a star is born, it traps with it the chemical abundances of the ISM at the time of its birth like a time capsule and carries them with it throughout most of its life.  Thus, the ratios of certain elements in a star could probe at what point in the Milky Way’s chemical evolution (and thus in time) the star was born. 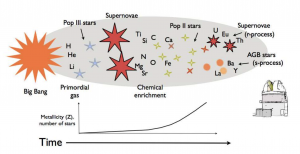 Figure 1: A cartoon depicting the different timescales of chemical enrichment from various sources, the concept behind chemical clocks. Core-collapse supernovae, which come from short-lived massive stars, for example, dominate the chemical enrichment of the Milky Way early on. AGB stars, which originate from long-lived low- and intermediate-mass stars, start contributing to Galactic chemical enrichment later on. Figure 1 in Jacobson & Frebel (2014)

The authors are first able to recreate the result found in previous studies that wide binaries are more chemically similar in their elemental makeup than random pairs of stars in the field.  This makes sense.  Stars born in the same place should share the same chemical composition because the interstellar medium is understood to be very homogeneous on small spatial scales.  The chemical abundances of stars directly reflect the chemical abundances of the material from which they were born, so if the interstellar medium is well-mixed, and stars share a birth place and age, then they should share a similar chemical profile. 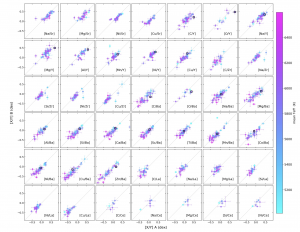 The authors then make an interesting discovery: when they investigate chemical clocks among wide binaries, they find that components of wide binaries tend to be even more similar in chemical clock abundances than other elemental abundances, as seen in Figure 2.  They find that even when components of a wide binary are quite dissimilar chemically in [X/Fe], as is the case in one particular pair in their sample (black box in Figure 2), they are still very consistent in chemical clock abundances.  This result suggests that chemical clocks could be effective age indicators even when stars are extremely dissimilar in other elements.  The authors highlight that three chemical clocks in particular, [Sc/Ba], [Al/Ba], and [Ti/Ba], seem to be the most consistent among wide binaries and thus the most promising indicators of age.

Do Aluminum Abundances Foil Our Theory of Galaxy Evolution?