Globular clusters are dense, spherical collections of hundreds of thousands of stars. They’re some of the oldest and most metal-poor parts of the Galaxy. As such, they provide clues to the Milky Way’s past, including the galaxy merger events that may create them. Today’s paper examines the Globular Cluster VVV CL001 to determine its metal content and possible origins. We’ll look at how the cluster compares to others like it to see if it makes the most metal-poor podium.

VVV CL001 was discovered by the Vista Variables in the Via Lactea (VVV) Survey, which has increased the number of known Globular Clusters in the Milky Way to over 300. Think of this like the Olympic trials– this Globular Cluster and many others were undiscovered until they jumped out and caught the VVV Survey’s eye.

Selecting who makes an Olympic team is a difficult process, and determining which stars belong to a cluster is no different. Today’s authors used the Apache Point Observatory Galactic Evolution Experiment (APOGEE-2) and archival data to obtain spectra for stars near VVV CL001. There are a lot of stars in the field-of-view (or athletes in the running), so the authors had to separate out members and non-members of the Globular Cluster using radial velocities. Figure 1 shows the radial velocities in the field-of-view with distance from the estimated center of VVV CL001. The center of the cluster is based on proper motions from the Gaia mission. Gray points show APOGEE-2 targets, mostly near zero. Zooming into the bottom of the figure, the blue points show probable VVV CL001 stars from past studies. Those are like the athletes who have been to the Olympics before– they’re likely to qualify again. The distinct, negative radial velocities compared to other stars in the sample allowed the authors to identify two stars within the APOGEE-2 data that are also very likely members of the cluster. Those are shown in black squares. 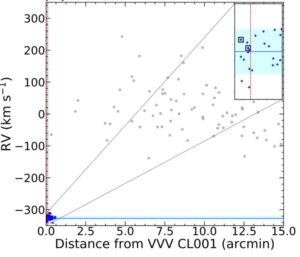 Figure 1. Radial velocities with distance to the center of VVV CL001. Stars within the cluster have a much lower radial velocity than those outside of it, making them easy to distinguish. Adapted from Figure 1 in the paper.

The authors of today’s paper use a Markov Chain Monte Carlo (MCMC) method to determine the most likely age and distance of VVV CL001 based on the colors of its member stars. It turns out to be 11.9 Gyr old and 8.22 kpc from the Sun. That makes it an old, inner Galaxy cluster. And although age might not be the best criteria for judging Olympic athletes, old Globular Clusters are helpful because they let astronomers look back in time at what conditions were like in the Galaxy in the past.

The main event in these Olympic Games is determining metal content. In this competition, the most metal-poor Globular Cluster is going to take home the actual medal. That’s because metal-poor clusters are usually really old and can show us what the very first generations of stars look like. Using model spectra, today’s authors fit the APOGEE-2 data for temperature, gravity, and metal content in the two VVV CL001 stars. Then they calculated the ratios of metal absorption lines in each star, like nitrogen to iron, [N/Fe], and iron to hydrogen, [Fe/H], which is used as the overall value for metal content in a star, or the metallicity.

Within the orbit of the Sun, Globular Clusters have metallicities ranging from -2.37 to 0. Previous studies found ESO280-SC06 to be the most metal poor Globular Cluster in the entire Galaxy, with [Fe/H] = -2.48, so that cluster is the reigning gold medalist. But VVV CL001 might give ESO280-SC06 some good competition this time around! Today’s authors found that the two stars in VVV CL001 have an average [Fe/H] = -2.45 \pm 0.24. Based on the large error, it’s still unclear whether VVV CL001 has beaten ESO280-SC06 for the gold medal, but it’s certainly on the podium.

Figure 2 shows a comparison of metal ratios in the two VVV CL001 members (in black) compared to other metal-poor Globular Clusters (other athletes in various colors). It’s a pretty close race. In general, the clusters are similar, but VVV CL001 has a lower overall metallicity. Also, the big difference in values of [N/Fe] between the two stars in black might suggest that there are multiple populations of stars in VVV CL001, meaning that there have been multiple epochs of star formation within the cluster. It’s like VVV CL001 has some really solid older players, but the team might also include some great new up-and-comers. However, because there are only two data points, this is far from a certain conclusion. 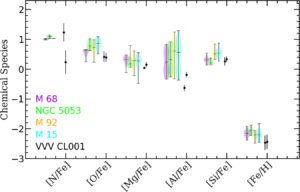 Figure 2. Metal abundances in metal-poor Globular Clusters. There is a slight horizontal offset between points for clarity. VVV CL001 has a low [Fe/H], even compared to other metal-poor clusters. Figure 3 in the paper.

The authors of today’s paper also simulated possible orbits for VVV CL001, finding that it may have been created from the Sequoia or the Gaia-Enceladus-Sausage dwarf galaxies that played a big role in forming the Milky Way halo. They also found that the cluster is twice as massive as previously thought, which makes VVV CL001 one of the most massive, metal-poor Globular Clusters in the Galaxy, and an excellent example of the extreme properties possible in a cluster. As an athlete in the Globular Cluster Olympics, it may not be the clear champion, but it is certainly unique.

Understanding Globular Clusters and how they are formed will provide clues that track the history of galaxies. As more and more of the clusters are identified and studied in depth by studies like the VVV Survey and APOGEE-2, we will learn more about the Milky Way and may be able to finally award the medals in the Globular Cluster Olympics!