The Ghosts of Planets Past: Determining the Composition of Planetary Remnants

This guest post was written by Isabella Trierweiler,  a 3rd year PhD student at UCLA studying exoplanets and planet formation who grew up in Alabama and completed an undergraduate degree at Yale. Outside of astronomy, Isabella enjoys baking, attempting to grow lemon trees, and knitting socks. 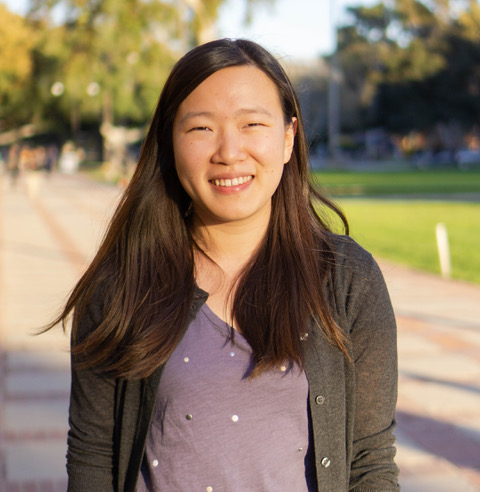 The Ghosts of Planets Past: Determining the Composition of Planetary Remnants

Status: Published in the Monthly Notices of the Royal Astronomical Society [closed access]

Measuring a planet’s composition can teach us a lot about the geological and chemical history of the planet. For example, it can tell us what kind of environment it formed in, or whether it could have features like plate tectonics. However, compositions are often hard to obtain in the field of exoplanets, since we can’t simply collect material from an extrasolar system. One promising method for studying the insides of extrasolar bodies without physical samples involves white dwarfs. These stellar remnants form when a medium mass star runs out of fusible materials, and expels its outer layers in a planetary nebula (Figure 1). The white dwarf left behind is extremely dense – you can picture it as the Sun compacted to the size of the Earth.

The super high density of the white dwarf means that any elements heavier than helium present in the star will be pulled towards the center of the star almost immediately after the white dwarf forms. So most of the time, if you take a spectrum of a white dwarf, you would only see signs of hydrogen or helium. However, spectra of white dwarfs have shown that many of these stars actually have heavy elements present on their surfaces long after formation. These objects are known as “polluted white dwarfs,” and astronomers believe the traces of heavier elements are due to objects like planets, moons, or asteroids, that are pulled apart and subsequently swallowed by the white dwarf (Figure 2). As the rocky objects take their final plunge, fragment, and burn up in the star’s atmosphere, astronomers can briefly observe the insides of these objects and figure out what they are made of.

Today’s paper focuses on planetesimals, or rocky bodies somewhat smaller than planets, as a possible source for the heavy element pollution of white dwarfs. The goal is to use the abundances of elements in polluted white dwarfs to assess whether the debris falling onto the stars come from planetesimals that were differentiated, or separated into layers. This is important because signs of differentiation constrain the geology and formation history of the planetesimal. Most of the larger planetesimals in our own Solar System are differentiated into core and mantle layers, but astronomers aren’t sure whether we are the norm, or the exception.

The authors use the abundances of calcium and iron derived from the spectra of 179 polluted white dwarfs to measure the fractions of the polluters’ masses that reside in core versus mantle material. They choose these elements because calcium is a lithophile (“rock-loving”) element, or an element that tends to be found in the rocky mantle towards a planet’s surface. In contrast, iron is a siderophile (“core-loving”) element, which is usually found in the center of a planet.

The tricky thing is that the core/mantle ratios we measure in polluters today, long after the formation of the white dwarf, might look a little different from the ratios the planetesimals had when they were first created. This is because planetesimals will collide and trade material over the course of their lifetimes.

Are planetesimals differentiated? Yes, but only with help from heating

In the sample of observed stars, the white dwarf polluters range from being entirely made of mantle to having cores of about 40% of their total mass. The authors find that their simulations create a distribution of planetesimals that matches the observations fairly well at larger core mass fractions, which is a point in favor of differentiation. However, as seen in Figure 3, the simulations were not able to recreate the observed number of mantle-dominated (low core mass) planetesimals.

The authors propose that heating up the planetesimals as they are forming can help explain the lack of mantle-rich polluters. Calcium, the mantle indicator, is much more refractory, or heat resistant, than iron. Therefore, if the planetesimals formed in environments that were quite warm, or were heated later on through energetic collisions, we would expect them to contain more of the heat-resistant calcium and less of the iron. Therefore, if this heating effect were included in the simulations, the authors would have found a larger fraction of planetesimals that have low core mass fractions, bringing the simulated core/mantle ratios closer to the observed ratios.

The authors conclude that most of the observed white dwarf polluters did come from differentiated planetesimals, though those planetesimals likely went through some kind of heating. They note that carrying out further studies with larger samples of white dwarfs, and potentially using additional elements to calculate the core and mantle mass fractions, will help solidify this finding and teach us more about the geology of these exoplanet systems.