More than 3 years since GW170817, Astronomers have reported the latest updates coming from the post-merger kilonova as seen through X-ray and Radio telescopes. 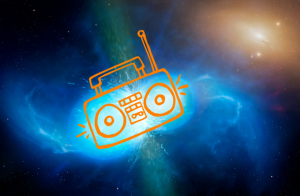 On August 17, 2017, astronomers worldwide sprang to their feet following an alert from LIGO and Virgo. These gravitational wave observatories had already made a series of groundbreaking detections involving pairs of black holes plunging into each other, but this new trigger was what their astronomer colleagues had always been waiting for: a merger involving two neutron stars. Unlike binary black holes, this event, labelled GW170817, was expected to light up and give signatures of an explosion, labelled a ‘kilonova’ in the electromagnetic (EM) spectrum. Indeed, just 1.3 seconds after the LIGO-Virgo trigger, the Fermi and Swift space-based observatories recorded a short-duration gamma ray burst (sGRB). What followed was a frantic hunt using optical telescopes, and the EM counterpart was finally located in the galaxy NGC 4993.

The wealth of science that came out of this multi-messenger observation was immense – including explaining how sGRB’s occur, the nucleosynthesis of heavy elements such as gold and platinum, and verifying that gravitational waves travel close to the speed of light, to name a few.

Anatomy of a Kilonova

Being the first-ever kilonova observed, GW170817 also helped us understand the astrophysical processes that emit radiation in different parts of the EM spectrum after a neutron star merger. Within 24 hours of the merger, early light in the optical and UV bands showed signs of emission from the radioactive decay of heavy elements from the tidal tails of the disrupting neutron stars. This optical and UV light dimmed out within a couple of days, and was followed by a brightening of the signal in X-rays a week later. Combined with radio emissions that emerged two weeks after the merger, this afterglow indicated that matter was ejected from the merger as a structured jet, where the velocity of the ejected material varied away from the jet-axis.

Soon after the initial observations, astronomers were able to confirm or constrain various structured jet kilonova models, and predict how the EM radiation, particularly in radio and X-rays would evolve over time. This is shown as the solid black line in figure 1: 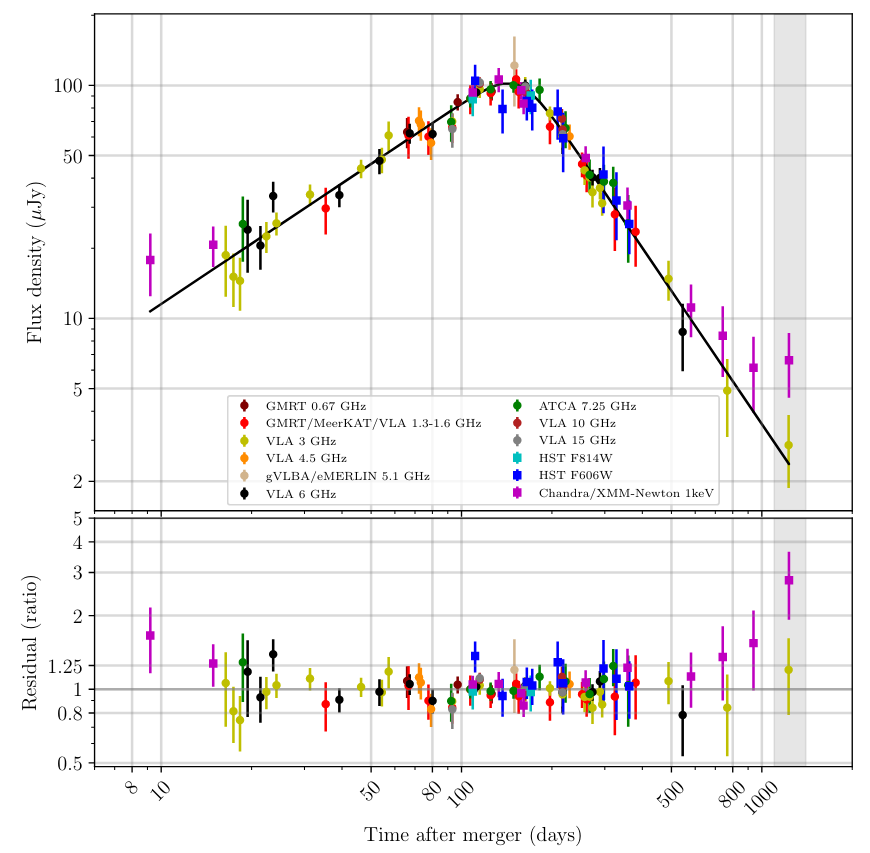 Recent X-ray observations (purple scatter points in figure 1) show evidence of signals in excess of the afterglow predicted by the structured jet model. While the X-ray emission used in the model is due to ejected particles moving at relativistic speeds (speeds close to the speed of light), this re-brightening could be a signature of ejecta moving at non-relativistic speeds interacting with the surrounding interstellar medium. Alternatively, it could be the initial sGRB that was seen a few seconds after the merger, scattering off interstellar dust! The uncertainties in the X-ray measurements are too large to definitively say which of these is correct, but continued combined observations in both the X-ray and radio spectra can help us figure it out.

Today’s authors follow-up the new kilonova observations in the radio spectrum, by reporting the latest set of ‘deep’ observations made using the Very Large Array (VLA) of radio telescopes. They increased the sensitivity of detecting the radio signals by increasing the observing time up to 32 hours. Previous observations of GW170817 were ‘shallow’, taken only over a duration of a few hours at a time – for which the kilonova emission had already faded.

The new radio observations (yellow points in fig. 1) show no radiation in excess to what is expected from the structured jet afterglow model (black line). The radio emission is still following the model and not showing the flattening observed in X-rays, and astronomers are trying to find out why. If the X-rays are just a back-scatter from previous emission, re-brightening is not expected to be seen in radio. But if the new X-ray emission is from a transition to slower, non-relativistic particles, the radio emission should follow suit; whether it happens now or is delayed by a period of time, remains to be seen.

More than three-and-a-half years since the neutron stars first chirped in gravitational waves, the ensuing fireworks continue to excite us!