A Disk And A Jet Walk Into A Star

Title: The ionized heart of a molecular disk. ALMA observations of the hyper-compact HII region G24.78+0.08 A1

Massive stars (larger than eight solar masses) can fuse atoms together into heavy elements, explode into supernovae that enrich the interstellar medium, and collapse into black holes. While massive stars form, they release UV radiation that heats up and ionizes a bubble of hydrogen around them, creating HII regions. But how these ionized regions contribute to the overall star formation process is not well known. Today’s authors explored one massive star and its surrounding gas to investigate the pieces of the star formation puzzle.

Partners In Crime (And Star Formation)

G24.78+0.08 is a high-mass star-forming region, and within it exists the hyper-compact HII region, A1. Today’s paper focuses on that HII region and the massive young star that it surrounds. Using ALMA, the authors trace signatures of both the ionized and molecular gas in A1.

Figure 1 shows the HII region. Black contours trace the ALMA continuum emission, brightest at two peaks in the center of the region. The color map represents the velocity of gas in the local standard of rest. There is a distinct gradient in that velocity (about 3 km/s/mpc) across the region, from the lower left (blue) to the upper right (pink). The solid black line follows that path, which is oriented at an angle of 133 degrees. 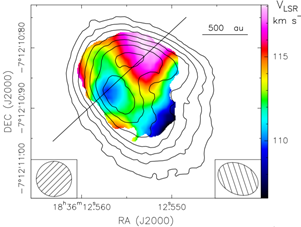 Figure 1. The A1 HII region. Black contours show the continuum emission from ALMA, while colors show the velocity of the ionized gas, which changes significantly along the straight black line that is oriented at 133 degrees. Adapted from Figure 3 in the paper.

What makes the 133 degree angle in Figure 1 truly interesting is that the HII region has ANOTHER, almost perpendicular velocity gradient oriented at 39 degrees. It was found in a previous study, but is much larger, about 22 km/s/mpc (compared to 3 km/s/mpc!).

So how can a single HII region have two velocity components that are so different? The answer comes in the forms of a disk and a jet– both known characters in the star formation show. The slower velocity component at 133 degrees represents the rotation of a disk, while the faster velocity component at 39 degrees represents an ionized jet that is created as material flows in towards the star and is then ejected! And the authors of today’s paper find more evidence of a rotating disk: gas velocity increases as radius (distance from the center star) decreases, much like it should in Keplarian rotation around a massive star.

By probing the excitation energies of certain molecular transitions, the authors find that fewer molecules are excited and gas temperature decreases as distance from the star grows. The inner portion of the disk is ionized, but the outer portion is made of molecular gas. The coexistence of the two components suggests that the massive young star at the center is still in the process of ionizing and accreting material.

These findings support the idea that disks stir up the massive star formation process. That’s important to know because making massive stars is an essential mechanism that controls and contributes to many aspects of our universe!