The astro-ph section of the arXiv is great for reading new papers submitted to journals like the Astrophysical Journal, Monthly Notices of the Royal Astronomical Society, and the Astronomical Journal, among others. In addition, it serves as a forum to post longer articles or chapters from upcoming books, so that readers can enjoy a first look at pre-prints of what will be in published versions.

Written by T. Rauscher and A. Patkos, the Origin of the Chemical Elements is a 65-page chapter from the new edition of the Handbook of Nuclear Chemistry. The chapter follows the nucleosynthetic processes that generate the abundances of the elements that we observe today, from Big Bang nucleosynthesis to the carbon-nitrogen-oxygen (CNO) burning cycle vital to stars. A number of recent developments, such as particle accelerators and the detection and characterization of the Cosmic Microwave Background (CMB) have revolutionized our understanding of the synthesis of the elements. As one might expect, nucleosynthetic processes are relevant to a wide range of astrophysical phenomenon, and this chapter is equally broad in its scope to explain them all.

After the Big Bang, the universe underwent an incredible era of massive inflation, where it increased in size by a factor of

or more in less than

seconds. Although hard to believe at first glance, this scenario conveniently explains many of the observed properties of the Cosmic Microwave Background (CMB). As the universe further expanded and cooled after inflation, the potential energy density of the early universe coalesced into a soup of the subatomic particles we know today. At these high temperatures, a series of nucleosynthetic reactions served to process protons, neutrons, and neutrinos into deuterium, tritium, helium, lithium and beryllium. As the temperature of the universe cooled, we expect that the reaction releasing the highest binding energy, the generation of helium, would be dominant. When finished, these reaction networks generate a mass fraction of hydrogen of

with trace amounts of lithium and beryllium.
The Wilkinson Microwave Anisotropy Probe (WMAP) has observed the CMB to exquisite precision, and has provided an incredible amount of information about the early universe.

In a way, stars can be thought of as giant furnaces that convert lighter elements to heavier elements and in the process release energy that shines to us as radiation.

The Virial theorem is extremely important concept in physics and astronomy. It relates the total kinetic energy of a system of bound particles to the total potential energy. Applied to stars, we have:

, which means that as the star shrinks (and the gravitational potential becomes more negative) the temperature rises. As a protostar coalesces at the center of a protoplanetary disk, the core of the protostar will get hot enough to begin fusing hydrogen to helium and become a star that will join the main sequence. After the star has exhausted its hydrogen, the core will again shrink, raising the temperature enough to permit the burning of helium. This process of shrinking and increasing temperature will permit the burning of heavier and heavier elements at higher and higher temperatures, and at faster and faster rates.

Stars spend the majority of their life in the hydrogen buring stage, because the conversion of hydrogen to helium is extremely efficient. There are two main hydrogen to helium synthesis reactions that are important inside of stars, each different from the process involved in Big Bang nucleosynthesis. For stars of roughly solar mass with (comparatively) low core temperatures, the p-p chain dominates. The p-p chain is comprised of three separate reaction pathways, involving various combinations of protons, deuterium, lithium, and beryllium, that all amount to the synthesis of helium and the generation of positrons and neutrinos. For stars roughly twice as big as the Sun with higher core temperatures, the CNO cycle (carbon-nitrogen-oxygen) cycle will dominate. The CNO cycle requires the presence of carbon, nitrogen, and oxygen, which act as catalysts producing energy more efficiently than p-p chain burning at higher temperatures. Because these catalysts (considered “metals” in astronomy, as is every element heavier than helium) are produced by the late stages of the burning of massive stars, the earliest metal poor stars (Pop III) are not able to undergo CNO burning. It is interesting to note that although they are very different processes, the p-p chain and CNO cycle have the same net reaction,

However, they have different energy generation rates (with dependent temperature dependences, too!) and the CNO cycle will tend to equilibrate to certain ratios of the isotopes of C and N.

Many models of solar system formation, star formation, and other evolutionary processes rely heavily on the known values of the solar abundances, or the amount of each element in the Sun. For example, many protoplanetary disk models assume that the disk composition is roughly the same as the Sun.  If these relative abundances were to change significantly, then different physical processes might be important for modeling the formation process. When in 2006 Asplund et al. updated the solar abundances obtained by Anders and Grevesse in 1989, a number of comparitive nucleosynthesis models needed to be recalibrated. 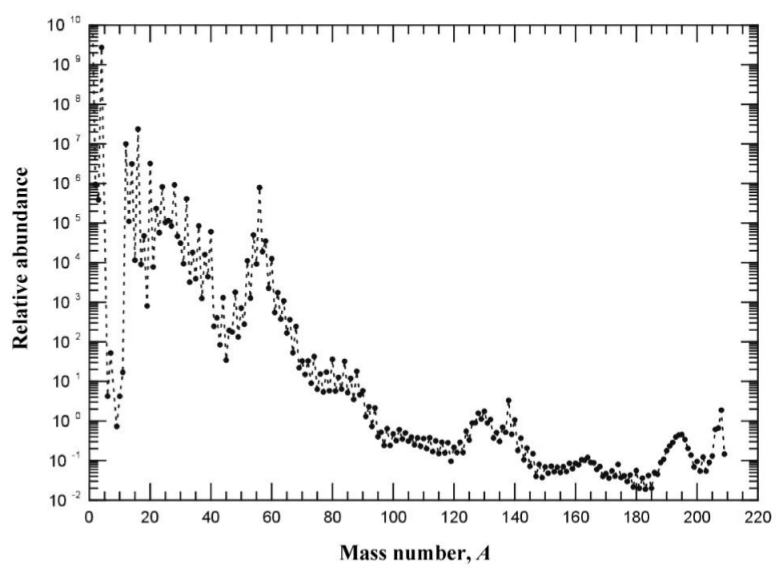 The solar abundances of the elements as a function of atomic mass. Data from Anders and Grevesse 1989

There are many levels of classification of supernovae (SNe). Two important classes are Type Ia SNe, which are believed to stem from the explosive thermonuclear burning of a degenerate white dwarf rich in carbon and oxygen, and core collapse SNe, which are formed from the collapse of the core of massive stars (mass greater than eight solar masses). The exact detonation mechanism of Type Ia SNe is not well known, but the SNe will yeild a large amount of radioactive nickel, which will decay into stable iron. Thus, the majority of iron in our solar system today is believed to have been produced by past Type Ia supernovae that enriched the protostellar environment where the Sun formed. In the catastrophic explosions of core collapse supernovae are believed to have been formed many of the rare earth elements heavier than iron via the rapid-process (r-process) of heavy element nucleosynthesis involving neutron capture and beta-decay.

Much of the uncertainty in the origin of the elements stems from not knowing to high precision the nucleosynthetic processes at the astrophysical conditions at the extremely high temperatures and densities inside stars and cataclysimic explosions. However, new radioactive ion beam facilities will enable scientists to study the reactions of unstable nuclei to better understand the slow and rapid processes of heavy element nucleosynthesis. New neutrino detectors will allow scientists to learn more about hard-to-detect neutrinos, which are important to everything from big bang nucleosynthesis to the slow and rapid processes. The Large Hadron Collider (LHC) will perform experiments that will shed light on the conditions during the Big Bang and the processes of Big Bang nucleosynthesis.

In the final pages of Origin of the Chemical Elements, the authors remark that “It is especially amazing to ponder this from the point of view that this knowledge was gathered without really or just barely leaving the surface of our planet.” This statement underscores the nature of astrophysical research: most “experiments” are passive, astronomers make observations of what is out there. Much of the foundational work is done in the laboratory and with particle colliders to reproduce conditions as best as possible, and then extrapolate.

And now, the smallest star ever.