Water on Mars? Hold up.

In the last few years, some researchers have claimed detection of liquid water under the south polar ice cap on Mars. This extraordinary conclusion was based on interpretations of radar data from the Mars Express orbiter, specifically from the Mars Advanced Radar for Subsurface & Ionosphere Sounding (MARSIS) instrument. A subglacial pocket of liquid water, though expected to be very salty, could allow Mars to host life today. However, more recent studies have proposed alternative explanations for the anomalous detection that don’t require liquid water.

This MARSIS instrument, at the center of all this hubbub, works by sending a radar “chirp” down from orbit that can penetrate the surface of Mars to a depth of a few kilometers. Along the way, stark contrasts in the material properties cause echoes that are recorded by the instrument. Based on models of the expected velocity of the chirp through the medium, these echos can be translated into an image (called a radargram) where the length of the time delay is analogous to depth (see Figure 1). Because liquid water is extremely reflective to radar, previous research concluded that anomalously strong echoes from some locations under the Martian ice are best explained by underlying ice melt.

As it turns out, other features in the ice could also be responsible for the bright radar reflection. The authors of today’s paper perform the same kind of modeling as the original authors, but instead of incorporating a liquid water layer, they experiment with different types of alternating ice layers near the bottom of the ice cap. At the frigid temperatures of Mars, there’s not only water ice, but also solid CO2 (or “dry ice”) which can condense from the atmosphere then sublimate again with the seasons. The authors model multiple scenarios for what the subsurface may look like (see Figure 2), notably including alternating layers of water ice and CO2 ice. 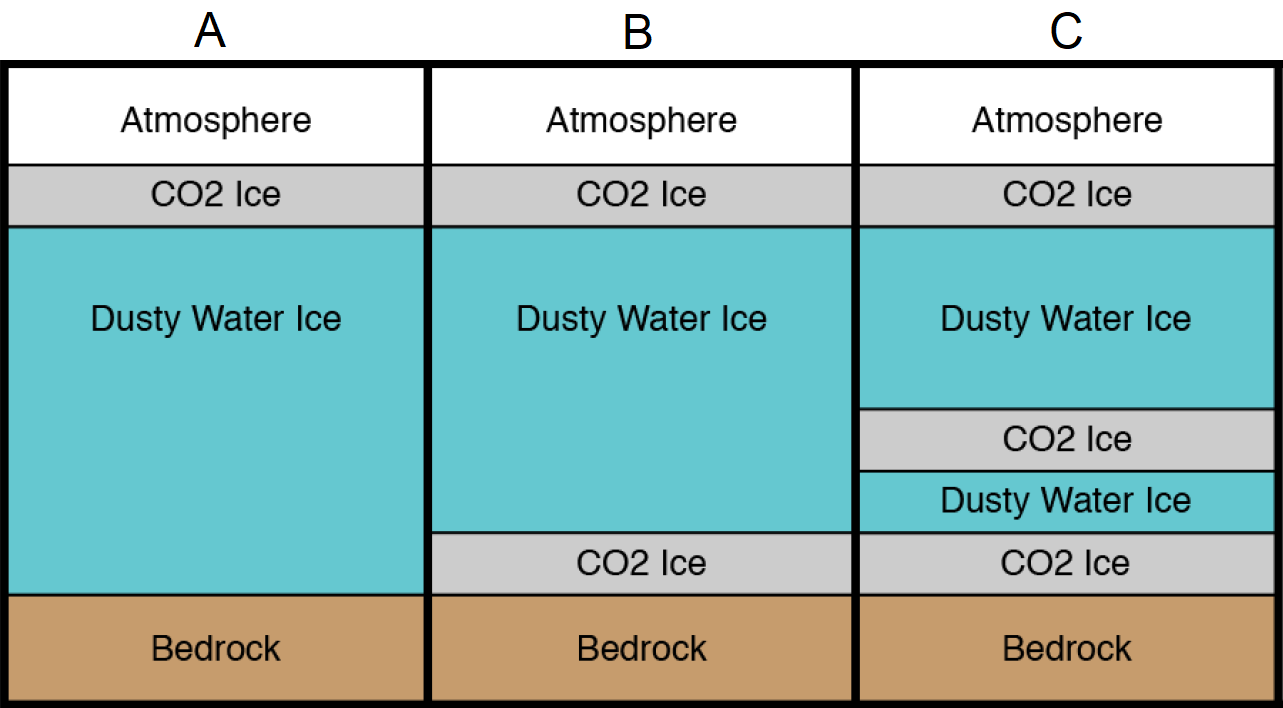 Figure 2: Diagrams of three scenarios modeled in the study. The best-fit is scenario C. Note that the layers are not drawn to scale. Figure 1 from today’s paper.

The upper layer of CO2 ice is thought to be about 5 meters thick, while the vast majority of the ice cap is a water ice layer (mixed with some basalt dust) about 1.4 km thick. Below this dusty ice, one of the scenarios modeled has two additional layers of CO2 ice, sandwiched around more water ice. Varying the thickness of these lower layers between 1 and 100 meters thick, the authors find arrangements in the model that can reproduce the bright radar reflections.

The alternating layers of CO2 and water ice cause the radar chirp to echo multiple times and result in constructive interference that strengthens the signal. The simulation that includes these 3 bottom layers produces a result essentially identical to the output of the simulation with liquid water at the base of the ice cap (see Figure 3). 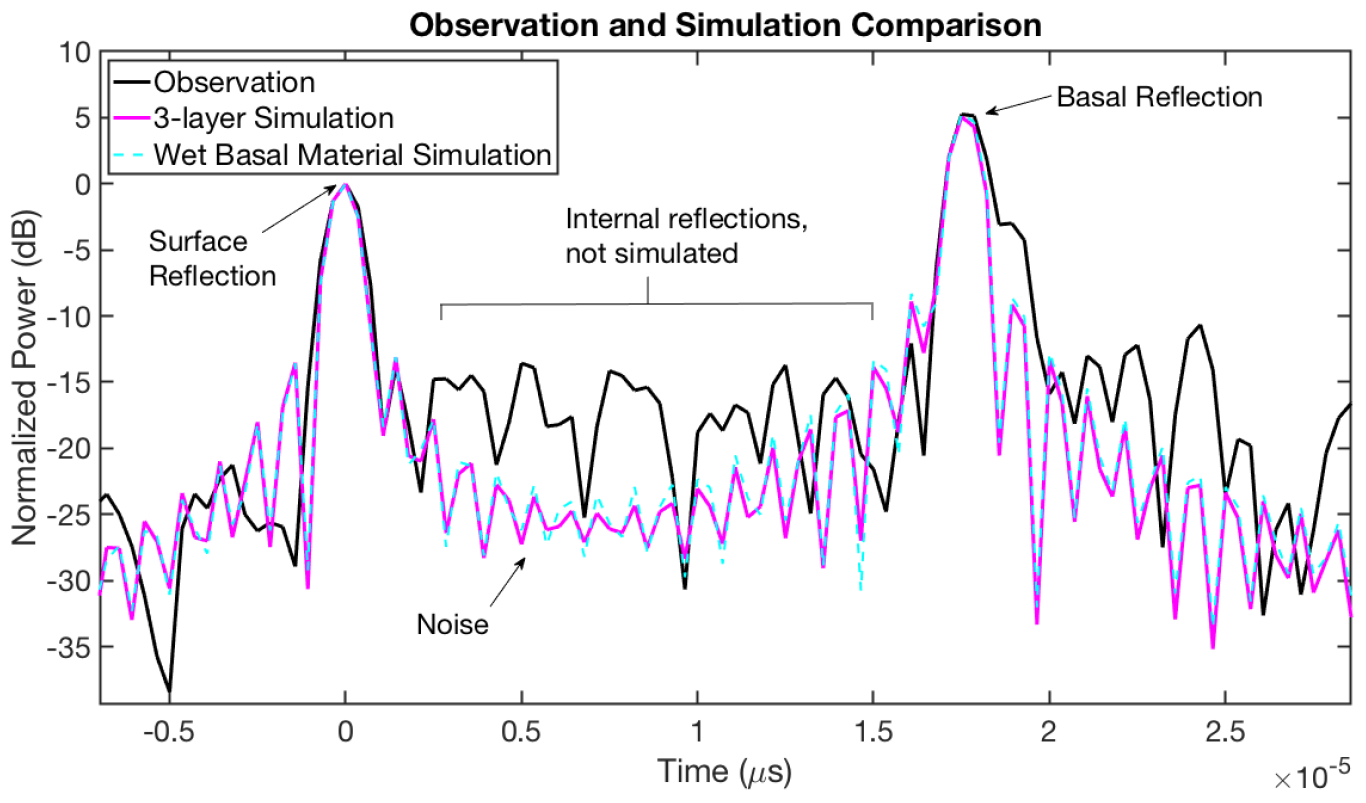 Figure 3: Plot of the observed radar reflection (black) and results from two simulations: three layers of ice (pink) and base layer of water (cyan dotted). The y-axis, power, is the strength of the reflected radar chirp. The x-axis, time, can be thought of as depth, which gets deeper to the right (tilt your head left and compare to Figure 1!). The chirp first encounters a strong reflection at the surface (left peak), then nothing exciting happens, then there is another, even stronger reflection at the base of the ice (right peak). Note that both simulations appear to fit the observation equally well. Figure 2 from today’s paper.

The authors also note issues that other researchers have had with the proposed subsurface lake. Some suggest that even with very salty water to lower the freezing point, the temperatures necessary for liquid water would require a local heat source, such as a near-surface magma chamber. In fact, one of the main disagreements between today’s paper and the previous water detection has to do with thermal properties. The permittivity, which controls how much of the radar signal can pass through the material, depends partly on temperature. Whereas the previous work modeled a temperature at the base of the ice of 205 K, today’s authors used 175 K. The cooler temperatures in this new scenario allow for a greater echo as the chirp bounces between the alternating ice layers.

The three-layer simulation explains the observations made with MARSIS using only conditions already known to occur on modern Mars. It may be that the particular materials and layer thicknesses happen to line up just right to produce the bright response in these few locations. The necessary materials are certainly found in the region and have been observed with the modeled thicknesses elsewhere. Furthermore, the authors note from previous work that the locations of the putative lakes do not coincide with where one would expect subglacial water to flow, if present.

The new scenario proposed in today’s paper is just one relatively simple model that makes for an alternative hypothesis to explain the bright echo. In addition, two other publications recently came out in Geophysical Research Letters (Bierson et al., 2021 & Smith et al., 2021), suggesting that the bright echo could instead be due to a layer of conductive clays, metallic minerals, or salty ice. The type of clay that could be responsible has even been indicated from spectral measurements near the south pole. All in all, it seems there is definitely some debate to be had surrounding the legitimacy of liquid water on modern Mars.

Naturally, multiple hypotheses will be put forth and falsified until only the most viable solution remains—though it may take additional data to get there! The planets never cease to surprise.