This past month has been huge for our neighboring planets. Phosphine was detected on Venus, and it may point towards microbial life. Now, liquid water has been confirmed and mapped underneath the surface of Mars! The water was first discovered in 2018 by the Mars Express spacecraft underneath an ice-sheet near the planet’s South Pole. Today’s paper used the same instrument, the Mars Advanced Radar for Subsurface & Ionosphere Sounding (MARSIS), to look at the region in more detail.

Water On Mars: A Saga

The search for water on Mars has been a long one that has mostly resulted in finding lots of ice. The North Pole makes up a lot of that, whereas the South Pole is smaller and actually contains a lot of solid carbon dioxide. Scientists have also found evidence of water formerly flowing on the planet, and even an entire missing ocean. But the main idea is this: Mars once had water, and now it has a lot less, possibly because of an extreme global warming event. Finding the liquid water that Mars might have is really important because it’s our best chance at finding signs of life on the red planet.

To find water underneath the surface of Mars, today’s authors used the same technique that is used to find subsurface lakes on Earth: radio-echo sounding. Basically, MARSIS bounced radio waves off of Mars and measured what was reflected back. Figure 1 explains how radio-echo sounding works. The time it takes for a signal to return to the satellite depends on how thick the layer of ice is, and the intensity of the returning signal depends on how reflective the surface underneath the ice is. By measuring these properties, today’s authors were able to determine the structures underneath a region of ice on Mars’ south pole. 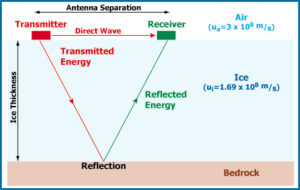 Figure 1. The radio-echo sounding technique involves sending a radio wave out from a transmitter and through ice. The wave hits the bedrock beneath the ice and is reflected up to a receiver. The time the wave takes to travel back to the receiver depends on the thickness of the ice, and the amount of reflected energy depends on the reflectivity of the bedrock (or subsurface liquid water!).

Today’s paper used three main measurements from radio-echo sounding to identify subsurface lakes on Mars. The first was signal intensity, which directly correlates with how reflective the surface under the ice is. Water has a higher reflectivity than rock, so higher intensities correspond to liquid water. The second was acuity, a measure of the smoothness of the surface under the ice. Increased acuity means a smoother surface, which also corresponds to liquid water because as you can imagine, water is ‘smoother’ than rock. The third was intensity variability, which is larger when there is a transition from a dry region to a wet region under the ice surface. There’s a general rule of thumb that variability over 6 dB corresponds to water.

Figure 2 shows the results of signal intensity and acuity. The blue regions in each panel represent likely locations of liquid water underneath the ice. The previously detected water from 2018 is located at the (0,0) point of the images and is surrounded by other pond-like structures.

Figure 2. The region of ice that was surveyed on Mars. The center is located at (0,0) and corresponds to the previous detection of water from 2018. White lines represent the tracks that will be discussed in Figure 3. (a) The intensity of the radio-echo measured by MARSIS. Higher intensity (bluer) means a higher reflectivity, which can correspond to the presence of water. There is clearly water at the center location, and there is likely water scattered in surrounding ponds. (b) The acuity of the region, which is related to the smoothness of the layer of material under the ice. Higher and smoother values can correspond to water. The pattern of ponds mimics the intensity in (a). See Figure 4 in the paper.

To look at specific parts of the region, the authors chose four profiles to examine, represented by the white lines in Figure 2. Two of the profiles were in a ‘dry’, dim region (I and II), while two cut across the known, bright water (III and IV). These profiles are shown in Figure 3. The black lines show the surface ice, while the red lines represent the base layer of material. Peaks in the red, especially those above 6 dB in the intensity variability (third column), correspond to ponds of water. 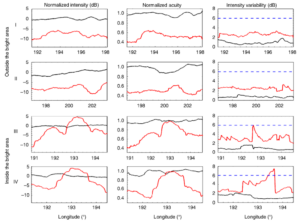 Figure 3. Profiles of the white lines from Figure 2. Lines I and II correspond to regions outside the bright, likely wet area. Lines III and IV cross directly over the bright area that was identified as liquid water in a previous study. Black lines represent the ice layer, while red lines represent the base layer underneath the ice. The first column shows the normalized intensity of the returning wave. For regions with possible water (III and IV), the base layer peaks above the ice layer. The second column shows the normalized acuity, which also shows spikes in regions with possible water. The third column shows the signal variability. Anything above the dashed blue line is a liquid water candidate. See Figure 3 in the paper.

The authors argue that some of the blue regions in Figure 2 that don’t make the 6 dB cut-off in Figure 3 might still contain liquid water in small amounts or in the form of wet sediment. They also found the area of the largest lake in the region (located at (0,0) in Figure 2) is 20×30 km, about the same area as the city of Chicago!

But Isn’t Mars Too Cold For Water?

You were probably asking this question the whole time you were reading this article. And you’re right! Mars is way too cold for regular liquid water to exist without something else going on. There have been some theories that magmatic (magma flows!) activity might make it warm enough for liquid water to exist on Mars. But today’s authors offer another explanation: brines. Brine is basically super salty water. The mixture of the salt and water actually lowers its freezing point, which allows the brine to stay a liquid at much lower temperatures. Not only that, but once the liquid is formed (say it melts when Mars is at its warmest), it has a hard time recrystallizing into a solid.

Finding ponds of water on Mars is not only super cool, but may also point us towards other life in our solar system. On Earth, liquid water is necessary for almost every form of life. Finding these ponds on Mars presents a new possibility for life on the red planet. It also demonstrates the effectiveness of radio-echo sounding in mapping water beneath an icy surface, which could potentially be used to explore moons like Enceladus and Europa.