Status: Accepted to Monthly Notices of the Royal Astronomical Society

Yesterday marked the four-year anniversary of one of the most remarkable days in gravitational wave astronomy. On August 17, 2017, a gravitational wave rippling through spacetime was detected by the Virgo interferometer in Italy and LIGO’s sister detectors in Louisiana and Washington. Automated alerts and manual analysis prompted a massive search by astronomers at dozens of observatories around the globe and in space, and within 24 hours, the event had been detected by optical, infrared and gamma-ray telescopes, eventually to be joined by ultraviolet and radio observations. This unprecedented effort was made possible by the fact that the signal – termed GW170817 – originated from a pair of merging neutron stars. 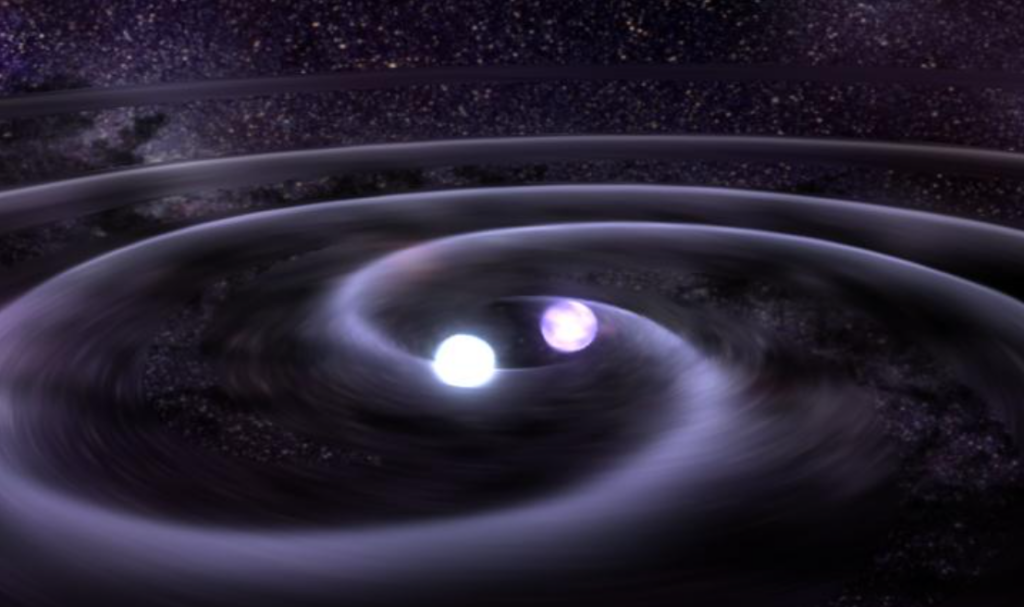 Unlike the black hole-black hole mergers LIGO had previously found, binary neutron star mergers emit light in several ways. Two relativistic jets lead to a burst of gamma rays lasting only a couple seconds. In the hours and days following the merger, radioactive elements in the material ejected by the merger decay, producing an optical and infrared event known as a kilonova. Finally, as the jets travel through space, they interact with the surrounding medium. All of these processes gave astronomers a wealth of information about the collision that produced GW170817 – the first gravitational wave detection with an electromagnetic counterpart.

Today’s paper proposes another way to detect light from neutron star mergers – and a tantalizing possibility for one of the most anticipated space telescopes to contribute to gravitational wave astronomy.

A neutron star is the compact core of a massive stars that ended its life in style, with a supernova. A binary system of two such massive stars will therefore likely evolve into a pair of neutron stars orbiting each other. General relativity predicts that as they orbit, they lose energy in the form of gravitational waves, sending them spiraling closer and closer together until they merge, once again making their presence known across the cosmos.

Neutron star mergers are more likely to occur in star-forming galaxies because they require massive progenitors and merge on timescales of only hundreds of millions of years. This means that many will be surrounded by significant amounts of gas and dust, in the form of molecular clouds and the ambient interstellar medium. Dust is an infamous force in astronomy because it tends to scatter or absorb light; for instance, it is now thought to have been the force behind the Great Dimming that Betelgeuse began to undergo in December 2019. Even powerful supernova explosions can’t escape its effects.

In the case of neutron star mergers, however, dust is not the villain but actually an unlikely hero for observational astronomers – providing a way to view light we otherwise would have missed. Like many other energetic events, these mergers produce two high-energy jets consisting of particles moving close to the speed of light. After traveling about 0.1 parsecs, these jets collide with the circumstellar medium and emit ultraviolet and optical synchrotron radiation. However, this light must travel several more parsecs before it can interact with substantial quantities of dust, since dust within about 3 parsecs of the merger will have been heated enough to evaporate. 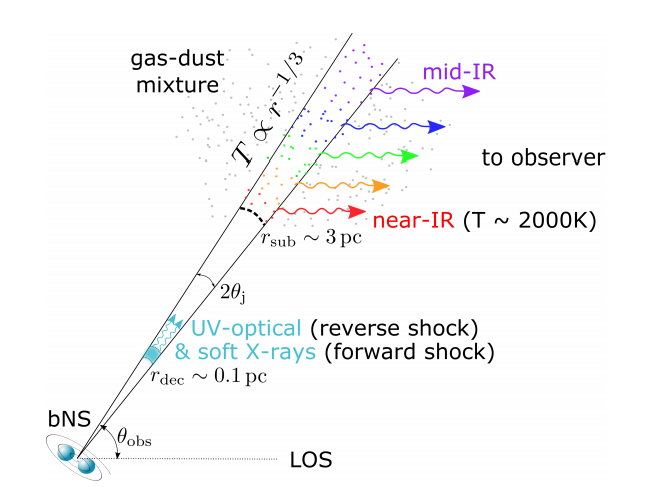 Figure 2: Each conical jet from the merger travels through the surrounding medium at some angle offset from the line of sight. Synchrotron radiation formed at a shock front is absorbed by dust several parsecs away and is reradiated in different directions, including towards us. The radial temperature distribution of grains means that the echo initially appears in the near-infrared, since dust closer to the merger is hotter, and shifts to longer wavelengths. Figure 1 in the paper.

Once the synchrotron radiation travels beyond this sublimation radius, it is absorbed by surviving dust grains and remitted as blackbody radiation. Lu et al. suggest that given the expected temperatures of dust grains, this “light echo” should be visible at infrared wavelengths, with hotter grains closer to the source radiating in the near infrared, and colder grains further from the merger radiating in the far infrared. Since light travels at a finite speed, the echo will first appear at shorter wavelengths and slowly shift to longer wavelengths as the synchrotron radiation reaches cooler and cooler dust grains. This means that the echo should begin a couple months after the merger and fade over several years.

This might seem like a neat effect on paper, but is it of any use to observational astronomers? Would it even be detectable? The authors argue that in some cases, yes! Later this year, NASA plans to launch the James Webb Space Telescope (JWST), a long-awaited space-based observatory that will greatly improve the capabilities of infrared astronomy. Assuming a neutron star merger is surrounded by an adequate amount of dust and that the jets are offset from the line of sight by no more than 30 degrees, JWST should be able to detect a light echo as much as 150 megaparsecs away – almost four times as far away as the source of GW170817. Moreover, the angular offset between the echo and the merger should grow to between a few and ten milliarcseconds (mas) depending on the distance to the merger, and as JWST’s astrometric precision should be about 3 mas at a signal-to-noise ratio of 10, the telescope might be able to distinguish the separation between the two.

It’s exciting to think about how astronomers will conduct follow-up electromagnetic observations of neutron star mergers down the line. JWST will hopefully start taking data midway through 2022, in time for LIGO’s fourth observing run (which might start as early as next August). Could it become a surprise player in the study of neutron star mergers? As with many things related to JWST, we’ll have to wait and see. 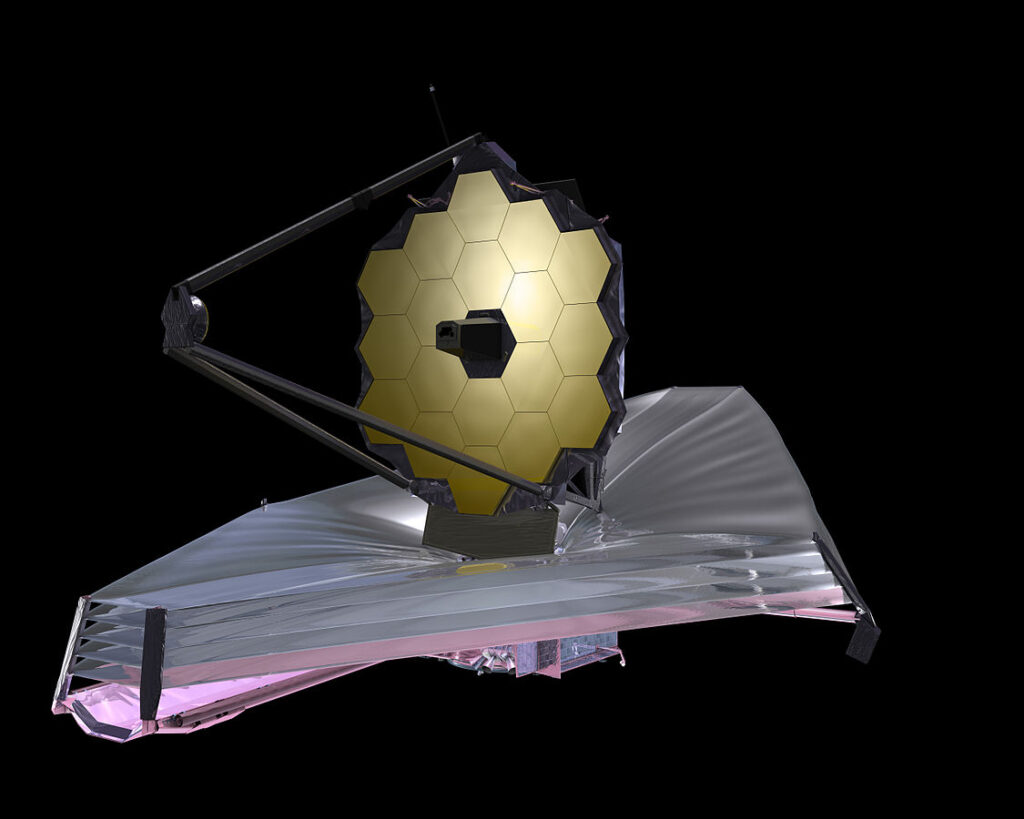