Status: Submitted to Monthly Notices of the Royal Astronomical Society, available on arXiv

Since Fritz Zwicky first demonstrated the existence of dark matter nearly 100 years ago, physicists have gone to great efforts to understand this mysterious component of our Universe. We now know that dark matter makes up most of the matter in the Universe, and that it forms haloes in which galaxies and galaxy clusters are embedded. These ideas have been backed up by theoretical work — huge cosmological simulations of our Universe also produce these dark matter haloes, and can even predict their shapes. These models show that the density of a dark matter halo increases steeply in its centre, leading to a central density “cusp”.

However, in recent years this has become somewhat problematic. Observational studies have instead found that the density flattens in the centres of dark matter haloes, to a constant-density “core” (as shown in Figure 1). This tells us that our theoretical work is not quite right — there is something that we haven’t included in our simulations which is forming the cored haloes we see in the real Universe. Today’s authors investigate this “cuspy halo problem”, to try and solve this mystery once and for all. 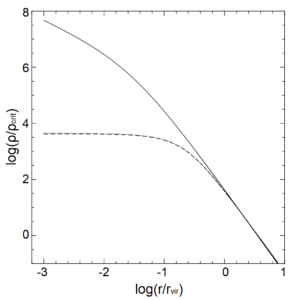 Figure 1: The dark matter density (vertical axis) of a halo increases as the distance to the halo centre (horizontal axis) decreases. For a cuspy density profile (solid line) this density continues to increase, but for a cored profile (dashed line) it flattens within a certain radius. Adapted from Figure 1a in Del Popolo (2009).

This discrepancy between theory and observations is strongest for smaller haloes, and so today’s paper uses a computer simulation of a dwarf galaxy, similar in size to the Small Magellanic Cloud. Most other simulations of dark matter haloes produce the cuspy profiles that we discussed above, however this simulation has been run 16 times, with each run including a different combination of two physical effects. Then, if any of these simulations produce the cored haloes that we see in the real Universe, it will imply that those physical effects can form a cored halo.

Our first suspect is supernovae: huge, bright explosions caused by dying stars, which can heat up the gas in the surrounding region of a galaxy, and even eject gas from the galaxy altogether. Importantly, this “supernova feedback” causes the gas in a galaxy to slosh around, which could in turn cause fluctuations in the gravitational potential in the galaxy centre, smoothing out the dark matter density profile and leading to a flatter, cored profile. This process will be stronger if star formation in the galaxy occurs in short, intense bursts, as these will lead to shorter, more intense periods of supernova feedback.

The alternative explanation comes from dark matter itself. Although we still don’t know what dark matter is made of, many of our current theories revolve around dark matter particles being “collisionless”. This means if you fired one dark matter particle at another, they would simply pass through each other rather than colliding (in contrast to something like a tennis ball, which could bounce off of another tennis ball). However, in this work the simulations are tweaked, so that they instead contain “self-interacting dark matter”, which is able to undergo collisions. This allows us to see whether collisions between dark matter particles can also smooth out the central cusp of a halo.

On the cusp of a huge discovery

As it turns out, the simulations show that supernova feedback and the self-interaction of dark matter are both important, as shown in Figure 2. Increasing the “burstiness” of the supernova feedback results in an increasingly flat density profile and a more prominent core. Making the dark matter more strongly self-interacting also produces a core, but only up to a point — if the dark matter interacts too strongly, it can collapse under gravity to form a central density cusp. 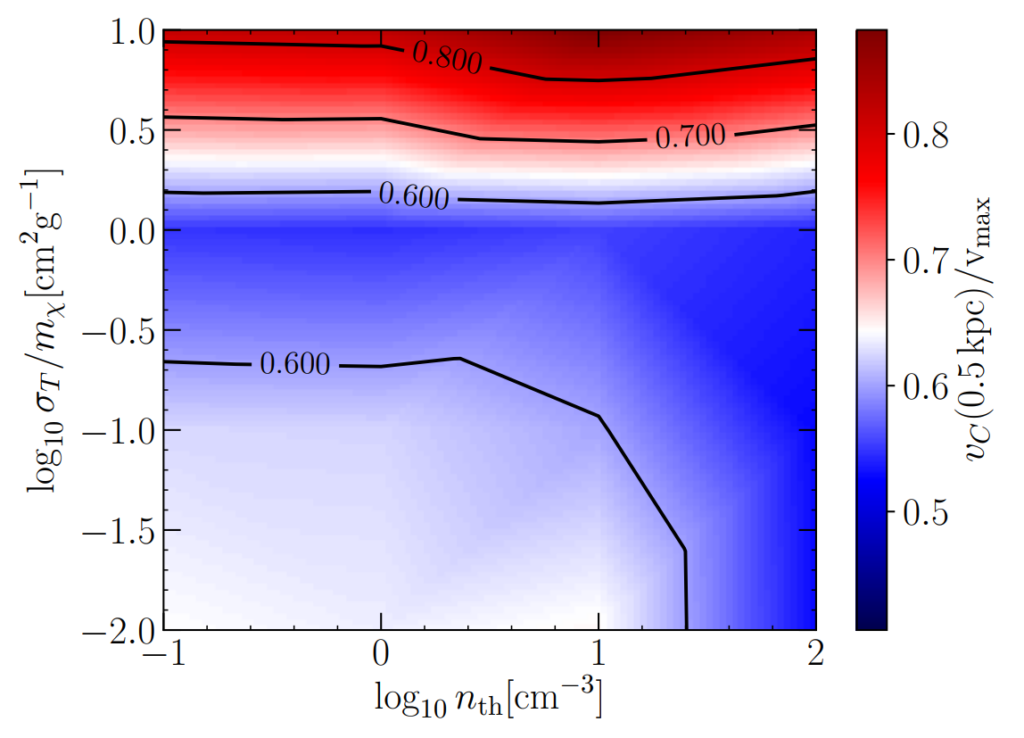 Figure 2: Plot showing the prominence of a halo core in the simulations. Star formation is increasingly bursty from left to right, and the self-interaction strength of the dark matter increases from bottom to top. Darker blue regions have a stronger core, and darker red regions have a stronger cusp. White regions are as cuspy as the simulation with collisionless dark matter and smooth supernova feedback. Adapted from Figure 3 in today’s paper.

However, this leads to another problem: degeneracy. If both of these mechanisms can explain the cores that we observe in haloes, how do we know which one is really to blame? Luckily, the authors have thought about this. Although both processes produce identical dark matter cores, they have different effects on the stars in the galaxy. Specifically, they affect the age and metallicity of the stars (the metallicity of a star is the amount of elements heavier than helium that it contains), two properties that we can measure in real galaxies. In the self-interacting dark matter simulations, the stars in the middle of the galaxy had very similar metallicities to those in the galaxy outskirts. Conversely, with bursty supernova feedback, there is a steeper metallicity gradient, and a very steep gradient in the ages of stars, with the galaxy outskirts containing older stars than the centre.

These conclusions are exciting: not only do they give two potential solutions to a major unsolved problem in cosmology, but they also explain how we can determine which of these solutions applies to our Universe, by making observations of real galaxies. The authors finish by stating that more detailed simulations would allow them to draw more detailed conclusions. However, the door is now open for observers to use these findings, and perhaps finally solve this dark matter mystery.