When the Magnets Get Tough Do the Winds Keep Flowing?

Title: Exploring the Effects of Active Magnetic Drag in a GCM of the Ultra-Hot Jupiter WASP-76b

Love it or hate it, magnetism can influence a whole host of observable astronomical phenomena, especially when it comes to hot gas giant planets. The most extreme of these planets, ultra-hot Jupiters (UHJs), are tidally locked and have temperatures over 2000K, hot enough to thermally ionise chemical species within the planet’s atmosphere. This process leaves plenty of charged particles ready to interact with the planet’s magnetic field as they get carried by the planet’s strong winds. While there have yet to be any direct measurements of exoplanetary magnetic fields, the fields of UHJs are expected to be comparable, if not even greater than that of Jupiter. With a field strength at its surface of ~4G, Jupiter’s magnetic field is already strong enough to extend its magnetosphere beyond the orbit of Saturn, so magnetohydrodynamics (MHD) should be an important consideration. For example, the Lorentz force created as the ions move through the magnetic fields can result in a drag effect on the circulation within the atmosphere. This magnetic drag can change wind patterns, impacting how easily energy is transported between the UHJ’s permanent day and night sides.

However, modelling exoplanet atmospheres is a complicated task even before considering MHD. One of the simplest ways to model magnetic drag forces is via a uniform drag applied to the entire model atmosphere, but this method ignores the potential impact that a planet’s hotter dayside and cooler nightside would have on the forces at play. Today’s paper instead uses a locally calculated active magnetic drag, taking into account factors such as the temperature to explore its potential effects.

For their work, the authors choose to focus on one particular UHJ, WASP-76b. To model the planet, they make use of a general circulation model, or GCM, to simulate temperature and wind patterns under the influence of magnetic fields with strengths of 0, 0.3, 3 and 30G. After running the simulations for 2000 orbits of WASP-76b, enough to allow the atmosphere to reach a steady state, snapshots are taken of the planet so that the magnetic field strengths can be compared.

In the case where no field is applied (0G), WASP-76b looks like any typical UHJ, with a strong equatorial wind blowing to the east and a large, 1500K, temperature difference between the day and the night sides. The planet’s hottest region is also shifted to the east of its substellar point (the part of the planet closest to the star and therefore receiving the most stellar energy), as expected due to those supersonic winds. This is demonstrated in the first column of Figure 1. 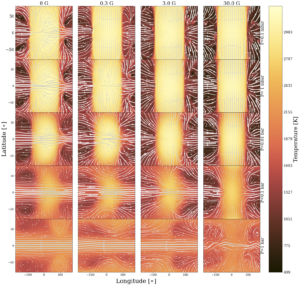 When the planet has a magnetic field however, the GCM snapshot shows a very different picture. For all field strengths, high in the atmosphere the winds on WASP-76b’s dayside flow over the poles – a complete change from the 0G case! The low pressures and high temperatures here cause a drag which counteracts the traditional east-west flow, leaving only the weaker north and south winds. At higher pressures the field strength becomes more important, with the strongest fields able to disrupt the wind deeper into the atmosphere. This poleward flow isn’t a behaviour seen when using the more simplistic uniform drag method, and could have some observable consequences for the planet

The Answer Lies in the Phase Curves…

The reduction in the eastward winds in strong magnetic fields means that WASP-76b’s hotpot would have a smaller shift from the substellar point than otherwise expected. The change in wind flow also reduces the amount of heat that moves between the two sides of the planet, increasing the contrast in temperature between the day and night. Helpfully, both of these effects can be tested by observing the planet’s phase curve, which measures the changing brightness of different faces of the planet as it orbits its star.

Figure 2: Left: Simulated phase curves of WASP-76b at the 4 different magnetic field strengths studied in the paper (solid lines). To show the difference between the active and uniform drag method, phase curves are also plotted using two different uniform drags, shown with dashed lines. Right: The amplitudes of each phase curve, given by the difference in the maximum and minimum fluxes normalised by the maximum flux. The stronger magnetic fields have phase curves with peaks closer to 0.5 and larger amplitudes. Figure 9 in the paper.

As shown in Figure 2, the modeled phase curves of WASP-76b have varying amplitudes and peaks at different offsets from an orbital phase of 0.5, when the planet is perfectly behind the star. Stronger magnetic fields cause the phase curve to peak closer to 0.5 due to the lack of hotspot shift. Meanwhile, the phase curve amplitude increases as the reduced winds prevent efficient transport of heat between the day and night sides, increasing the temperature difference and hence the difference in emitted flux.

Published Spitzer phase curves of WASP-76b are consistent with the 3 and 30G models due to their small hotspot offsets, however the authors caution against making direct comparisons. The atmospheric models used neglect several important effects such as the presence of clouds and the dissociation and recombination of hydrogen molecules, both of which could reduce the impacts of magnetism on the upper atmosphere.

Despite this, today’s paper clearly shows how important it is to consider MHD when modelling exoplanet atmospheres, and provides a great starting point for future studies.

Does Taylor Swift sing about the Gorgeous interstellar medium?

Baby B-fields from the Big Bang and Beyond