A Unique Hypernova Revealed by a Star Rising from its Ashes

Carl Sagan once said, “We are all made of star-stuff.” Even stars are made of star-stuff, endlessly recycling the gas and dust left behind by older generations of stars. A new observation has allowed astronomers to turn back the clock and study the earliest stages of this cycle.

In the aftermath of the Big Bang, our Universe consisted almost entirely of Hydrogen and Helium, out of which the very first stars were born. For Astronomers, any element apart from these is a metal – not only are we made of star stuff, we are almost completely metallic!

Light astronomical metals such as Carbon are forged in the cores of massive stars through nuclear fusion, while those heavier than Iron can be formed in Supernovae: gigantic explosions signaling the demise of massive stars. Supernovae leave behind gas, dust, and debris, from which new stars arise like a Phoenix from the metal-enriched ashes. These next-generation stars contain a higher metallicity, the abundance of metals compared to Hydrogen and Helium.

Based on metallicity, astronomers classify stars into two populations: newer generations like our own Sun have high metallicities, while older generations are metal-poor. One can imagine that looking back in time to a toddler Universe would reveal a third population of stars, composed of only Hydrogen and Helium and devoid of any metals. This generation of stars has never been directly observed, but for the first time, we might have seen their offspring.

Using observations from the Very Large Telescope (VLT), the authors of today’s paper discovered an unusual new star in the Sculptor dwarf galaxy. Named AS0039, it is ultra metal-poor, boasting the lowest metallicity found among any star outside of our own galaxy. AS0039 is also unique compared to other metal-poor stars, which typically fall under two categories:

In contrast, AS0039 has both a low Carbon abundance and unequal proportions of other, heavier elements, making it unlike any known type of metal-poor star. (Figure 1) 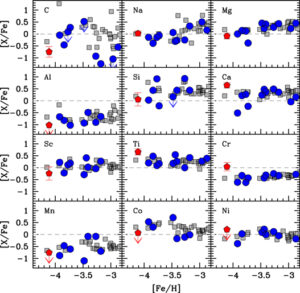 Figure 1: Metal abundances of AS0039 (red pentagon) compared to Iron on the vertical axis, and in turn to Hydrogen on the horizontal axis. The position of AS0039 on the left and bottom signifies low metallicity. It stands out when compared to other metal-poor stars in the Sculptor dwarf galaxy (blue circles) and the Milky Way (grey squares). Figure 2 from the paper. 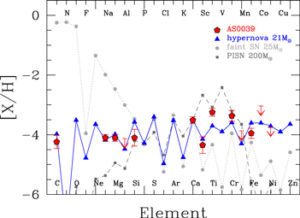 Figure 2: Ratios of different elements (along the horizontal axis) with respect to Hydrogen. The red points mark the pattern for AS0039, which is similar to that of a 21 solar-mass star Hypernova simulation. AS0039’s chemical signature is significantly different from that of a faint supernova (Grey line). Figure 4 from the paper.

The researchers compared the relative abundances of various elements in AS0039 with those found in gases left behind by various kinds of supernova explosions (Figure 3). Their analysis shows that AS0039 did not form out of a lone, faint supernova or even a mixture of gases left behind by multiple supernovae bonfires. Instead, its pattern matches closely with an inferno ten times more powerful than a supernova: a rare Hypernova unleashed by a star weighing 21 times the mass of the Sun. Given the extremely poor metal composition of AS0039, it is likely that this hypernova progenitor star had zero metallicity, and thus belonged to the very first generation of stars.

Detecting stars from the earliest stages of the Universe is an important science goal of future missions such as the James Webb Space Telescope. In providing further evidence for their existence, AS0039 takes us closer to finding the leading dominoes in stellar evolution.

A Metal-Poor Intergalactic Gas Cloud in the Early Universe