Many people are surprised to learn that the majority of stars you see in the night sky are actually binary star systems, where two stars orbit each other. Since many of these systems likely host planets, sunsets like that on Tatooine are probably quite common in the universe! Solar nebular theory explains how planets form around their host star from a contracting disk of gas and dust that typically rotates with the spin of the host star, which for a binary star system you might expect to be a disk in the same plane as the co-orbiting stars. However, the authors of today’s paper study the possible scenario where planet formation occurs perpendicular to the plane of the two host stars (see Fig. 1). 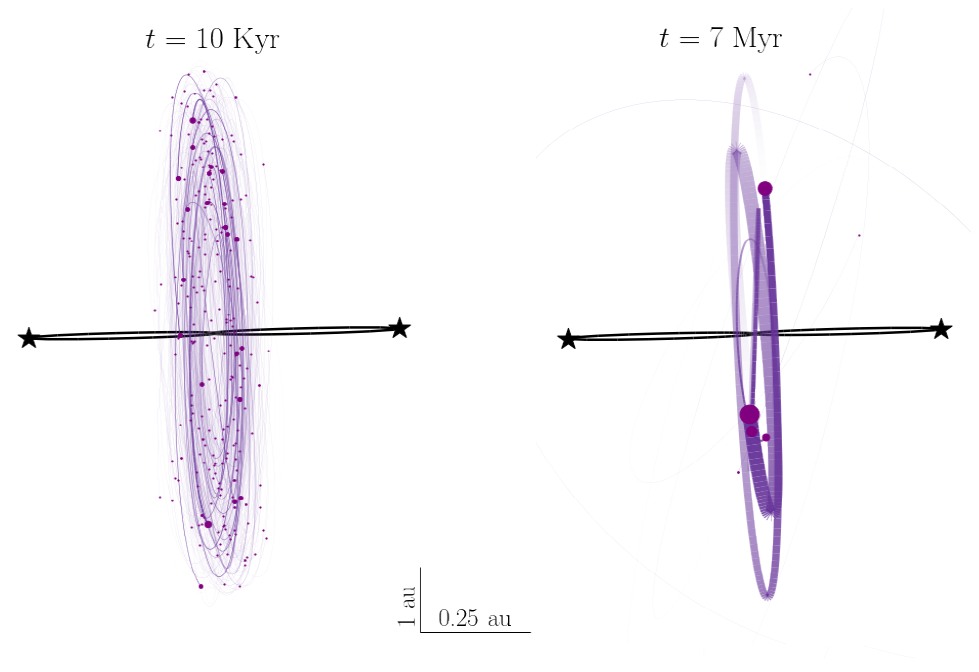 Figure 1: Particles in an eccentric polar orbit after 10,000 years (left) and 7 million years (right). The binary stars orbit with a semi-major axis of 0.5 AU and eccentricity of 0.8. Figure 1 in today’s paper.

Several exoplanets have already been detected around binary stars in coplanar orbits, but none have been found yet in perpendicular (AKA, polar) orbits. Amazingly, astronomers are starting to observe cases of protoplanetary disks (planets in the midst of formation) that are in polar orbits around binary stars. These findings suggest that if such planets remain stable during and after formation, there are probably many cases of polar orbit planets out there waiting to be discovered. Their apparent absence thus far is likely due to observational bias, since traditional exoplanet detection methods don’t lend themselves well to the long orbital periods and complex stellar spectra of such systems.

The authors of today’s paper perform simulations of planet formation with orbits in three different arrangements: binary stars in eccentric (elliptical) orbits with coplanar planet formation, binary stars in circular orbits with coplanar planet formation, and — for the first time — binary stars in eccentric orbits with polar planet formation. The modeling starts with two equal-mass stars separated by 0.5 AU, orbited by 500,000 particles in a hydrodynamic simulation of a gas disk with a mass equal to 0.1% of the total stellar mass. The resulting distribution of surviving mass in the disk (i.e., not ejected from the system nor swallowed by the stars) feeds into a second stage of modeling using N-body simulations. Here, it is assumed that gas has dissipated, and the system now contains 26 Mars-sized and 260 Moon-sized planetary bodies that interact gravitationally. Fifty simulations are run for each of the three orbital arrangements to observe the average evolution of the system over several million years of simulated time.

Comparing the two eccentric star systems, planet formation can occur much closer to the binary stars in the polar scenario than in the coplanar scenario (see Fig. 2). This finding suggests that if Earth-like terrestrial planets mainly form close to the host stars, they may be more likely in polar systems (as indicated by the abundance of small blue, Earth-mass, points in the lower left of the Figure 2 plots).

Figure 2: Plots of eccentricity (e; left side) and inclination (i; right side) as a function of orbital distance for simulated planetary bodies in each scenario after seven million years. Larger and bright yellow symbols represent more massive bodies than small dark blue symbols. Figure 3 in today’s paper.

The authors also explore how the eccentricity and inclination of planets in these systems vary over long timescales, as may occur due to gravitational resonances. Compared to the eccentric coplanar case, the eccentric polar case shows smaller variations. Although there are more variations in eccentricity closer to the host stars, and the polar case has much closer planets, the stronger gravitational force at these smaller distances stabilizes the bodies and does not seem to affect the resulting number of planets. Furthermore, the authors found that including the effects of general relativity did not significantly change their results, though Einstein’s theory has certainly been important for understanding planetary motion in some other cases.

Although the polar arrangement of planets around binary stars may seem unintuitive, the authors find that terrestrial circumbinary planets are more likely in polar arrangements than in coplanar alignments (if the host star orbits are eccentric). Imagine a world where the northern and southern hemispheres are sometimes lit by different suns! With there already being a few observations of polar protoplanetary disks mid-formation, it seems to be only a matter of time until the first polar terrestrial exoplanets are detected.