I am Iron Exoplanet: Meet GJ 367b, a dense sub-Earth

As special as we like to think Earth is, small planets are all around us – the most common type of stars in the solar neighbourhood, M dwarfs, are expected to be home to an average of 2.5 planets smaller than 4 Earth radii. But, these planets aren’t always easy to find. A small radius means the transit signal, the amount of light blocked as the planet passes in front of its host star, is only a tiny fraction of the total stellar flux. Additionally, the radial velocity (RV) signal, a measure of how much the planet’s gravitational pull shifts its star’s observed spectrum, is difficult to detect due to the low mass and hence the small gravitational impact that the planet has on the star. Detecting such planets around M dwarfs is a little easier than around sunlike stars thanks to M dwarfs’ smaller stellar radii and masses, however it isn’t always that simple. Young M dwarfs can be extremely active, with starspots which can be mistaken for transits and flares which complicate the stellar baseline flux, complicating transit detections, while the added noise from the activity makes picking out an RV signal much harder.

However, despite all the challenges, the Transiting Exoplanet Survey Satellite, TESS, has already found several small, rocky exoplanets orbiting M dwarf stars, and is expected to find many more as it continues its extended mission. In fact, the newest of these planets, GJ 367b, is possibly one of the most intriguing yet! 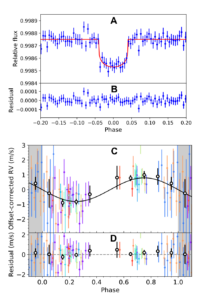 Figure 1: Fitting the data for new exoplanet GJ 367b. The top section shows the TESS transit light curve and residuals, with a transit duration of 29 minutes. The lower section shows the HARPS RV measurements and residuals of the host star, with the black points showing the data binned to intervals of ~45 minutes. This shows that the maximum velocity change caused by the gravitation pull of GJ 367b was 80cms-1. Figure 1 in the paper.

The M dwarf GJ 367 was observed by TESS in March of 2019, and flagged as a potential planet host after its light curve showed a regular 0.03% dip every 0.32 days. With the signal indicating a planet candidate roughly 0.75x the radius of Earth, the authors of today’s paper worked to verify that the signal was real with ground-based follow up observations using two different telescopes: the Rapid Eye Mount telescope at La Silla and the Las Cumbres Observatory Global Telescope Network. Using these measurements, they were able to rule out that the signal could’ve been caused by the M dwarf being part of an eclipsing binary. They also found that contamination from other nearby stars was causing the candidate radius to be underestimated in the TESS light curve analysis.

To understand the physical properties of the new planet, the authors combined the TESS transits with RV measurements from the HARPS spectrograph at La Silla, and simultaneously modelled both sets of data using a Markov-chain Monte Carlo code, as seen in Figure 1. The new planet, designated GJ 367b, orbits in a lightning-fast 7.7 hours and is close enough to its star that the dayside reaches over 1700K, hot enough to evaporate any atmosphere if the planet were able to retain one. With a radius 0.718 times that of Earth and having around half Earth’s mass, GJ 367b is one of the smallest exoplanets with well-refined size measurements, and comes in at a super-dense 8 gcm-3!

Is GJ 367b another Super-Mercury?

This iron-like density makes GJ 367b considerably denser than other ultra-short period exoplanets, as shown in Figure 2, and is unlikely to be a purely rocky or more Earth-like planet. The authors therefore investigated the potential composition using a mixture density network (MDN), a machine learning technique that can be used for predicting the makeup of the interiors of planets. 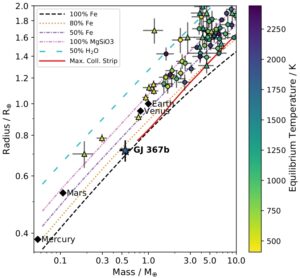 Figure 2: Masses and radii of known small exoplanets. The exoplanets are colour coded according to their dayside equilibrium temperatures, while solar system planets are shown with black diamonds. The dashed density lines represent different possible compositions, with less dense water and rocky worlds towards the top, and those with increasingly large iron cores towards the bottom. Figure 2 in the paper.

The MDN found that GJ 367b likely has an iron core taking up 86% of its radius, with the majority of the remainder consisting of the planet’s mantle. This is similar to the size of Mercury’s iron core as measured to be 83% by the MESSENGER spacecraft, and also obtained by the MDN. While the mass and radius of the planet are well constrained, they still allow for a fairly wide range of densities to be plausible, so these results aren’t certain. However, even at its lowest possible density, the authors note that the iron core radius fraction would still be larger than Earth’s, so while GJ 367b might not be a true “super-Mercury” the picture, as always, is a little more complicated than “Earth-like” would imply.

Hunting for Tatooine: TESS discovers its first planet around a binary star system

What will happen to Jupiter when the Sun dies?