Title: The DES view of the Eridanus supervoid and the CMB cold spot

Status: Accepted by MNRAS [closed access but available on arXiv]

The cold spot- a puzzle in the CMB

The Cosmic Microwave Background (CMB), also dubbed the “baby picture of the Universe”, is remarkably homogenous: It has almost the same temperature everywhere, with fluctuations on the order of 0.01%. However, there are some parts of the CMB that do not completely fit this homogenous picture, and one of them is the so-called Cold Spot. This region, first detected by WMAP and later confirmed by Planck, is up to 8x colder than the typical fluctuations in the CMB (see Fig. 1). While it is not impossible that the Cold Spot is simply a statistical fluctuation, there have been many attempts at finding a physical explanation, going as far as speculating that it is the signature of parallel universes. 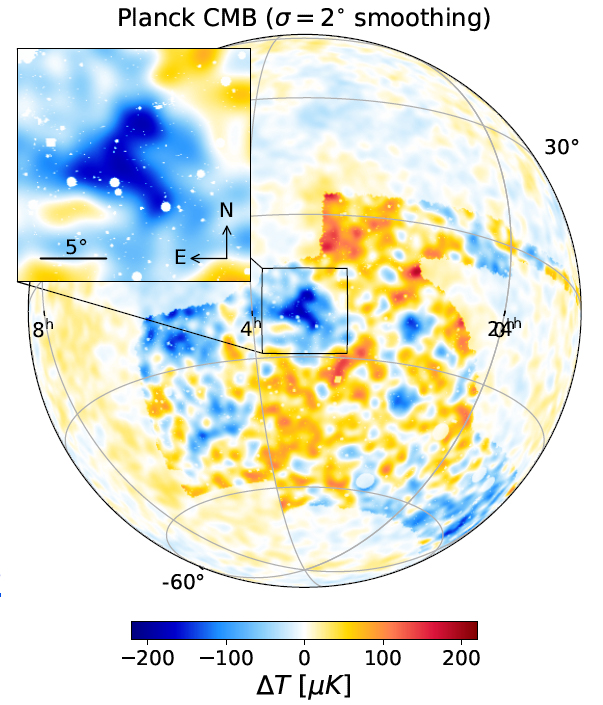 A plausible solution – the Eridanus supervoid

One of the most likely physical explanations of the CMB cold spot could be a vast cosmic void. Such a void is an under-dense region containing less galaxies and matter than an average patch in the Universe. Voids can cool CMB photons via the integrated Sachs-Wolfe-Effect (iSW). Since there is more matter around a void than inside, gravity pulls objects out of it. CMB photons entering a void need to overcome this pull and therefore lose a little bit of energy. If nothing happened to the void, the photons would regain all of the lost energy once they exit the void. However, we know the Universe is expanding, which causes voids to extend and become shallower, while photons travel through them. Due to this expansion the photons regain less energy at the exit of a void than they lost at the beginning. The end result is that  the photons lose energy and are  “cooled”.

Due to this effect, a large void could explain the cold spot. And indeed, by looking at the distribution of galaxies in the direction of the anomaly, researchers in 2015 found the Eridanus supervoid. The authors of today’s paper again go  on the look-out for the Eridanus supervoid, to confirm the previous detection and find evidence for its contribution to the CMB cold spot. However, they use a different method: gravitational lensing.

Finding a void with lensing

Gravitational lensing is a classic technique to measure the matter distribution in the Universe. The main idea goes back to general relativity: masses bend space-time and therefore light rays, since photons follow the curvature of space-time. Consequently, matter distributions distort the images of distant galaxies located behind them. By measuring how much the images are distorted, we can infer the intervening matter density and create mass maps. These maps commonly depict the convergence κ, which is a normalized sum over all matter between us and the galaxy whose distorted image we observe. A positive κ indicates an over dense region, while a negative κ indicates an under dense region – a void.

Today’s authors used the lensing signal measured by the Dark Energy Survey, a large survey focused on imaging galaxies for cosmology and gravitational lensing. Already in possession of very  precise shape measurements,  they were able to map the matter distribution in the direction of the CMB cold spot.

As shown in Fig. 2, they indeed found an under-dense region in the direction of the CMB cold spot. This finding confirms the existence of the Eridanus supervoid with an independent probe! The authors also found that the Eridanus supervoid, which is 20% less dense than the cosmic average and extends over 1.8 billion lightyears, is the most prominent void in the whole DES data set. 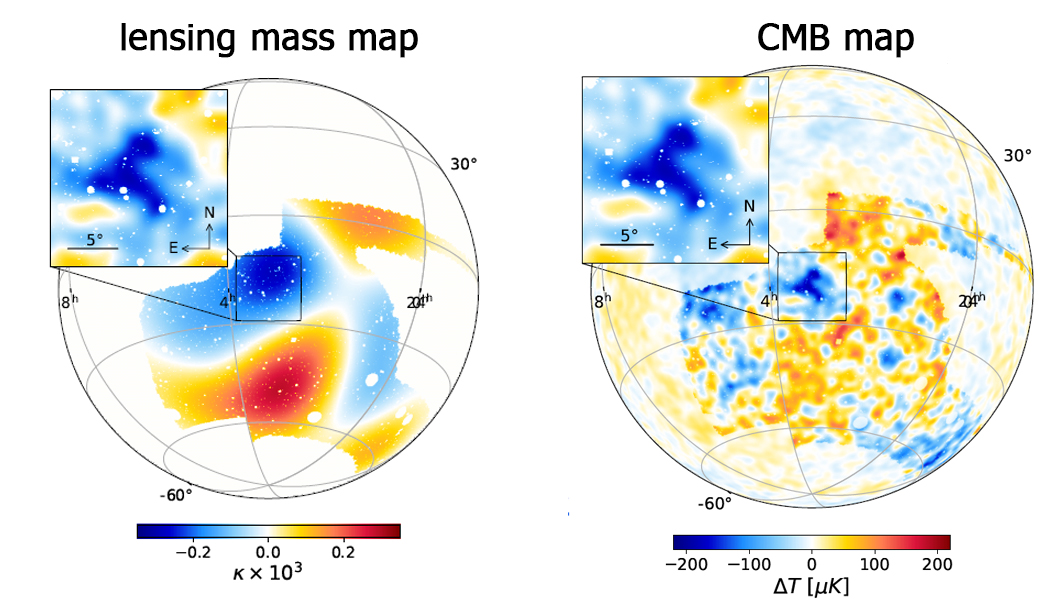 Figure 2: Lensing mass map constructed in the paper [left] and Planck CMB map [right]. On the left, blue regions are under-dense and red regions over-dense. In the direction of the CMB Cold Spot, the mass map shows a large under-dense region. The left map is the same as Fig. 1. [Fig 1+ Fig 4 from the paper, adapted]

Can this void explain the cold spot?

The question now on everyone’s mind is of course, whether this super void could explain the CMB cold spot. Unfortunately, in our current understanding of the Universe, the answer is not completely. The void can at most contribute to ~20% of the CMB anomaly.