Atmospheres of Small Planets Through a Big Telescope

Title: Detecting Biosignatures in the Atmospheres of Gas Dwarf Planets with the James Webb Space Telescope

Across the World, Astronomers are Excited…

… because the latest “Great Observatory” is set to be launched into space this week! The space telescope known as JWST has become infamous amongst space professionals for long and frequent delays in its deployment since its conception in 1996. Though its timeline and price tag are impressive, they are but small consequences of the telescope’s exquisite engineering and mind-blowing potential. Most often cited as the instrument which will allow us to peek further into the past than ever before, JWST might also be able to search for potential signatures of life on planets outside of our solar system! Today’s authors explain how.

A Portrait of An (Exo)World and its Atmosphere

On the planet Earth, we are protected from the adverse effects of our Solar System (like flying rocks and too much radiation) by our atmosphere. While our rocky home has just enough gravity to hold onto an atmosphere of mostly nitrogen (N), planets slightly larger than the Earth but smaller than Neptune would likely live in a bubble of hydrogen (H). Known as gaseous dwarf planets, these potential homes are easier to identify and study thanks to their larger sizes. Because of their hydrogen-dominated atmospheres, we expect these planets to preferentially host chemical reactions with hydrogen, producing molecules such as ammonia (NH3).

However, ammonia doesn’t occur spontaneously: it requires either extremely high temperatures and pressures, or the existence of a reaction catalyst, potentially developed for metabolic processes which could indicate the presence of life. Furthermore, ammonia is easy to destroy in volcanic environments, meaning that the presence of ammonia suggests the presence of a process that regularly replenishes it. Therefore, in these worlds ammonia is a possible biosignature: a clue that the planet in question might be hosting life!

Unfortunately, the presence of ammonia alone isn’t enough to detect life outside the solar system—but it would set the stage for follow-up observations and even more amazing science. The authors of today’s paper begin by considering seven close-by exoplanets of the right size and temperature range. In this bite, we’ll focus on one of the seven: TOI-270 c, which the authors find to be best suited for future JWST observations.

How Would We Search for Ammonia?

One method for determining the contents of a planet’s atmosphere is with transmission spectroscopy: measuring the light spectrum of the planet’s host star as it filters through the planet’s atmosphere on its way to the detector. Ideally, the measured spectrum will reveal the tell-tale dips and peaks of absorption and emission spectra which are associated with individual elements and molecules. An example of the signatures of ammonia from planet TOI-270 c is given in Figure 1. Note that there are several ammonia features we could potentially look for (at 1.0–1.5, 2.0, 2.3, 3.0, 5.5–6.5, and 10.3–10.8 µm) and that the height of the peaks depends on how much ammonia there is in the atmosphere in parts per million (ppm). The more ammonia there is, the easier it will be to detect! 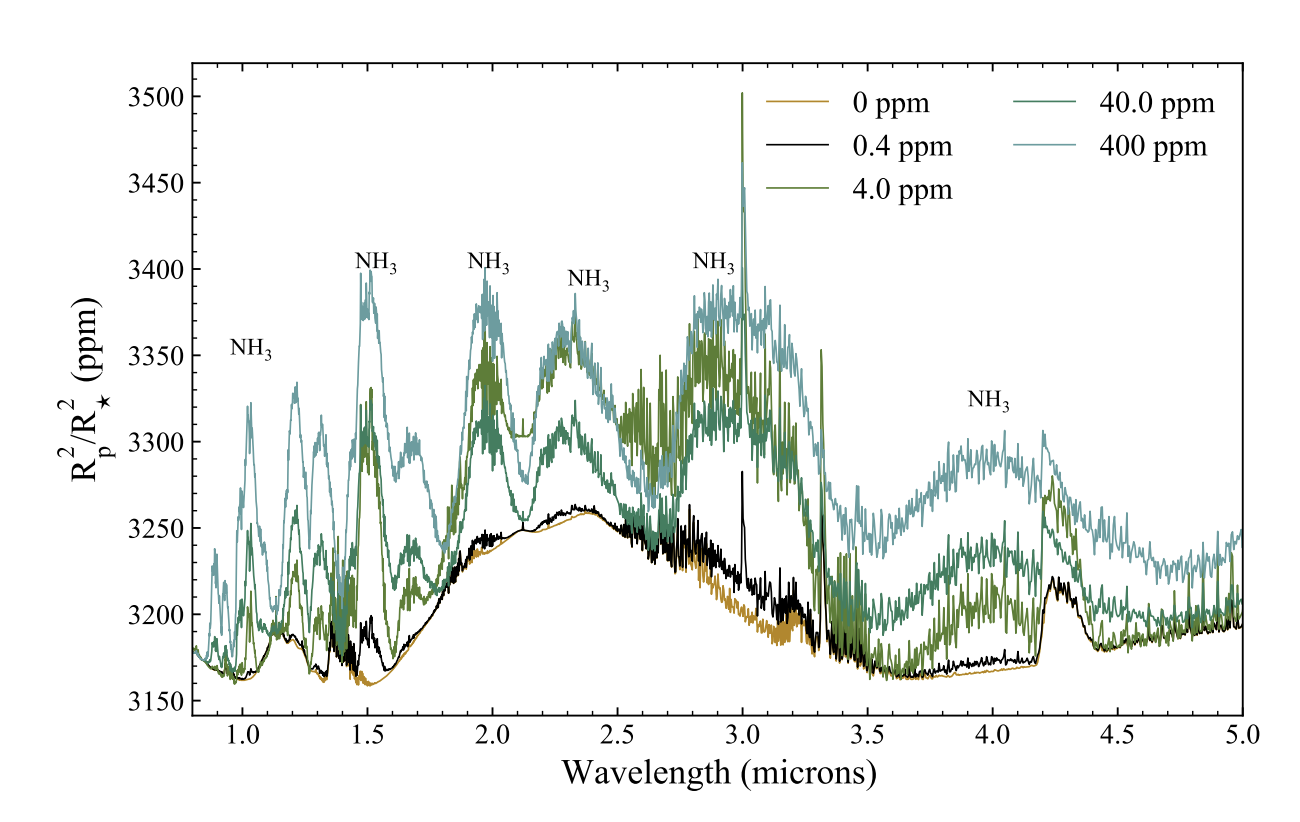 Figure 1: The spectrum of ammonia in the atmosphere of TOI-270 c for different ammonia concentrations in parts per million (ppm). The height of the peak is given in terms of the ratio of the radius of the planet squared and the radius of the star squared (aka, how much of the light is blocked). Note that there are at least 6 ammonia features to look for! Figure 10 in paper.

Another lever controlling the spectrum of TOI-270 c’s ammonia signatures is the presence of a cloud deck in its atmosphere. Whether the planet is enveloped in clouds—and at what height they occur!—will significantly change its ammonia signature, as shown in Figure 2. The authors show that the most identifiable signatures will come from a cloudless atmosphere, or one with a cloud deck at high pressures (read: low to the ground). On the other hand, a cloud deck at 0.01 bars (really high up!) would flatten the signature almost completely, making it incredibly hard to detect ammonia. 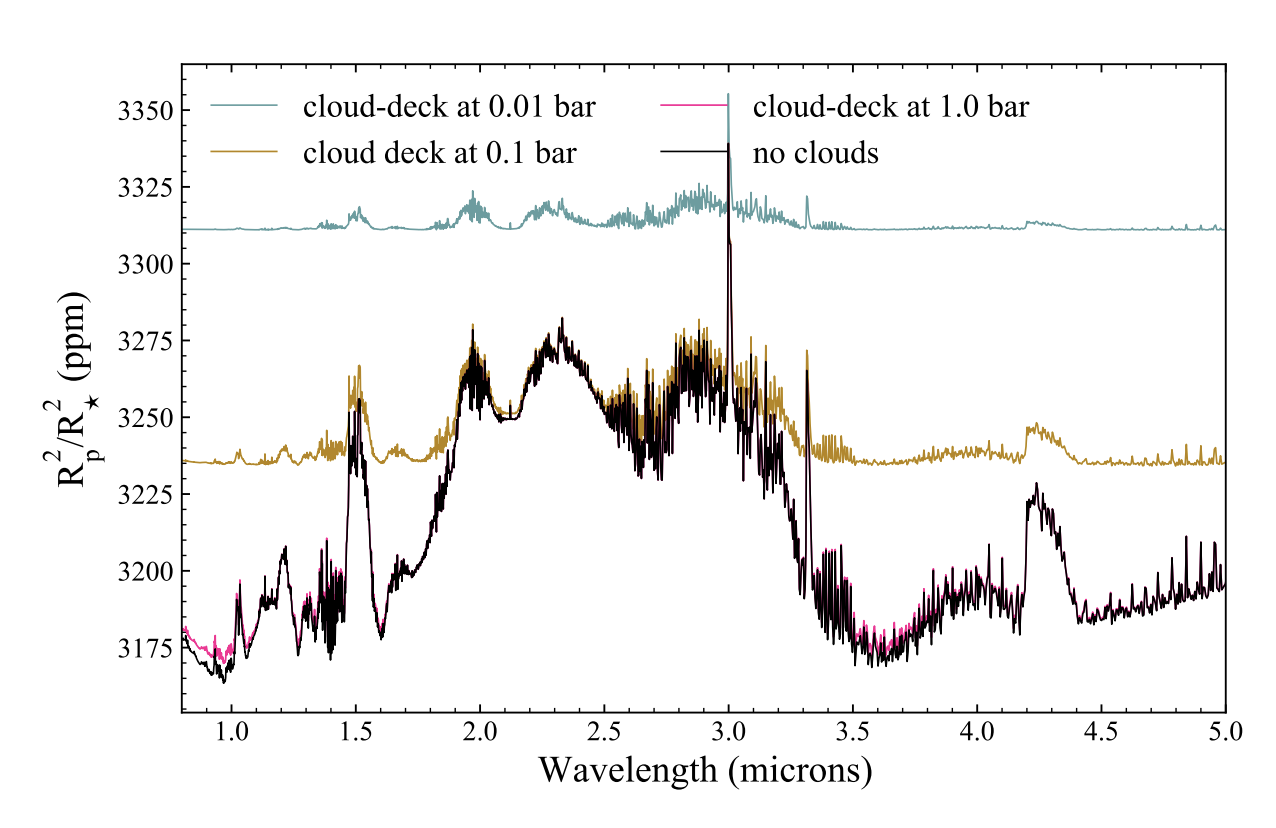 Could JWST See These Signals?

There are several instruments aboard JWST which could be used to hunt for ammonia-filled atmospheres; the authors find that Near-Infrared Spectrograph (NIRSpec) and the Near-Infrared Imager and Slitless Spectrograph (NIRISS) are particularly suitable. Together, these instruments cover the wavelength range of the ammonia features illustrated in Figures 1 & 2 above. The question is: are they sensitive enough to make the detection?

I won’t keep you in suspense: the authors’ results suggest that the answer is yes! The authors used two of their simulated spectra for above—assuming two different percentages of hydrogen in the atmosphere of TOI-270 c—and modeled what JWST observations of such an atmosphere might look like for 10 transits (see Figures 3 & 4). As might be expected, an atmosphere that is richer in hydrogen will produce a higher signal-to-noise ratio (S/N). 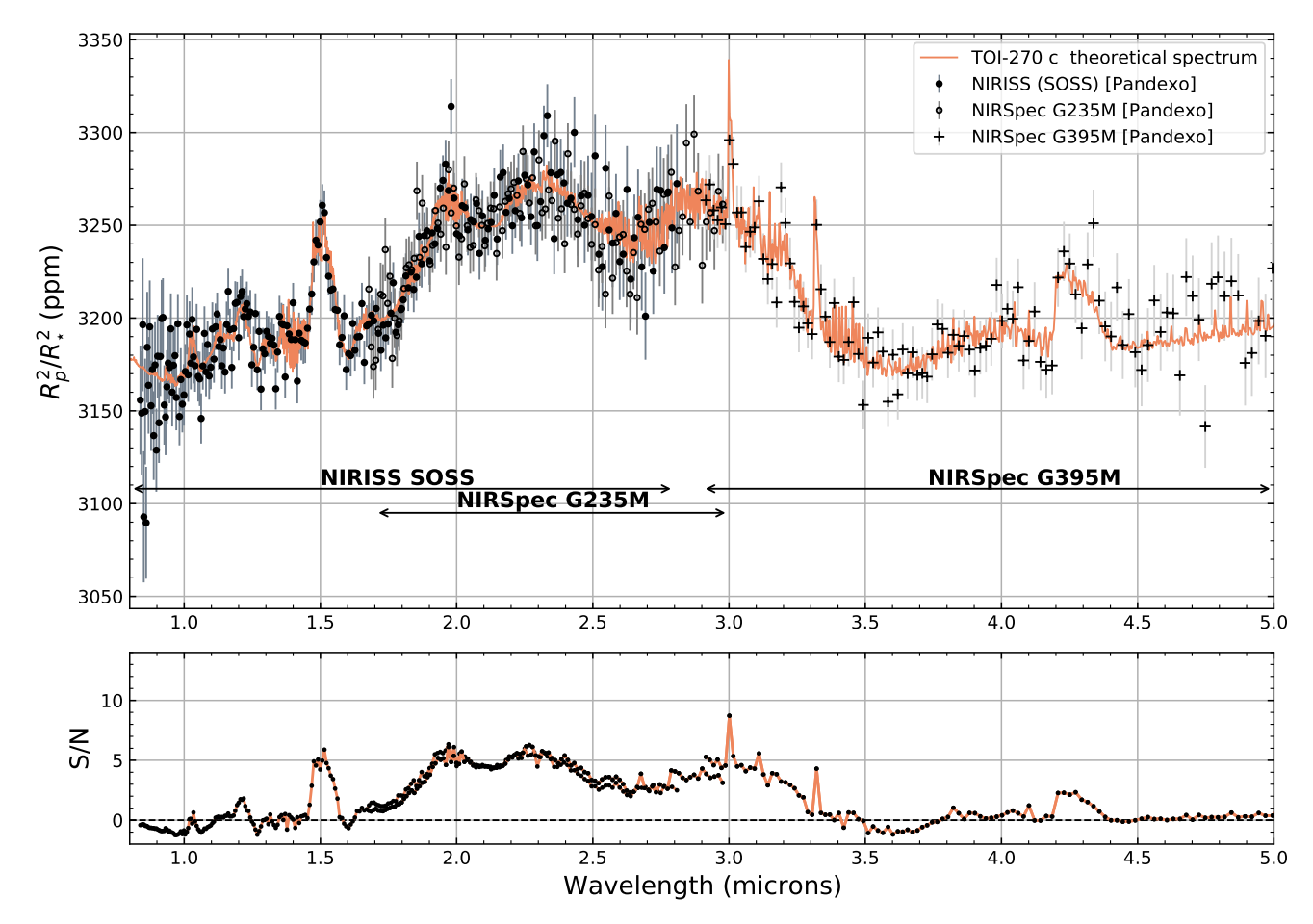 Figure 3: Top: The spectrum of ammonia in the atmosphere of TOI-270 c for an atmosphere rich in hydrogen is shown in orange, while the different black points show simulated JWST observations with NIRISS and two NIRSpec filters (G235M and G395). The authors also show the wavelength range of each of the instruments below the spectrum. Bottom:  the signal-to-noise ratio of the simulated spectrum and observations. Figure 7 in paper. 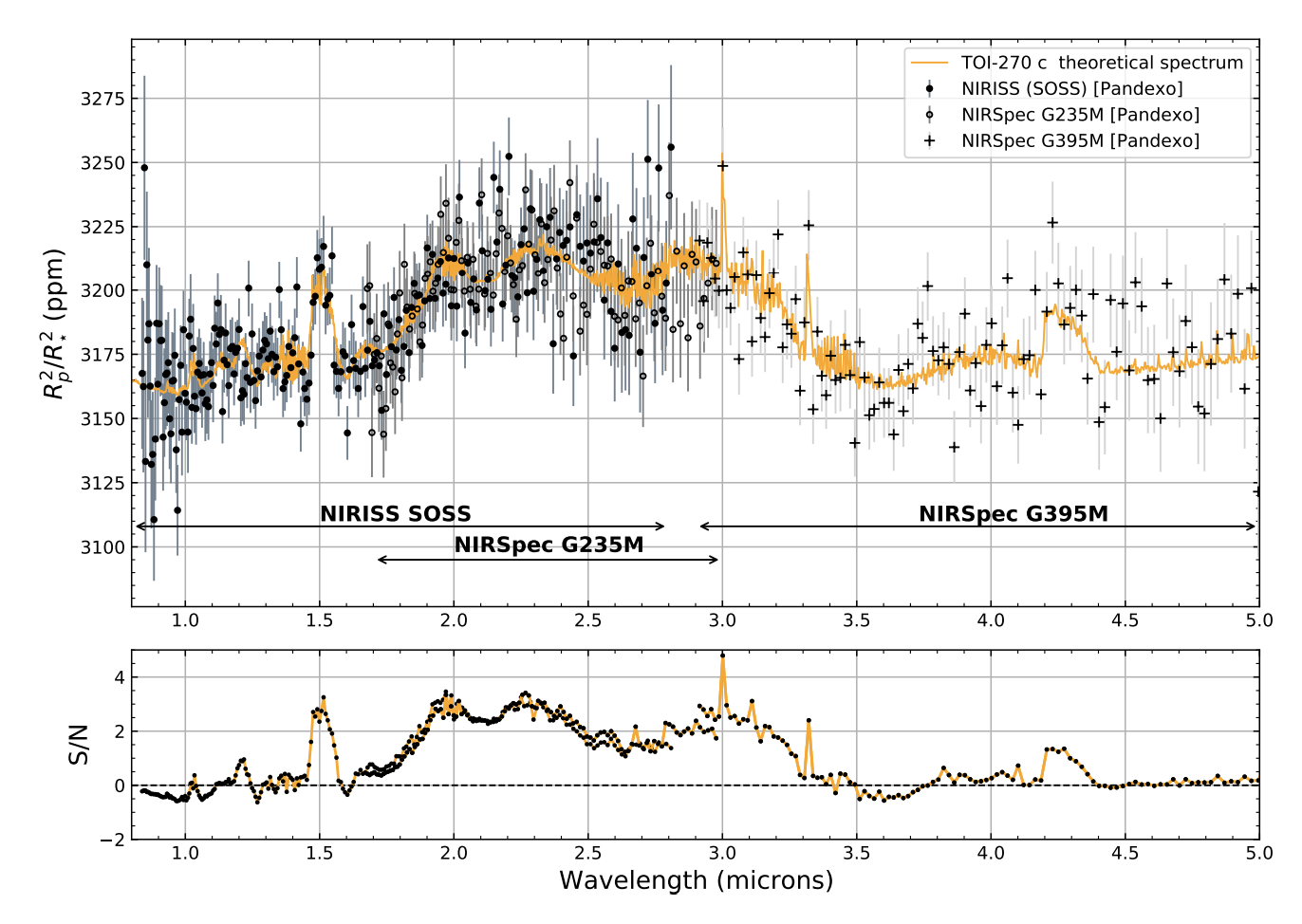 Figure 4: The same figure as above, but this time for an atmosphere that is poorer in hydrogen shown in yellow. Note that this results in a lower signal-to-noise ratio than in Figure 3! Figure 8 in paper.

Under the right circumstances (hydrogen-rich atmosphere, lots of ammonia, no cloud deck), JWST is well-equipped to detect ammonia on gas dwarf planets: an exciting start on a long road towards determining whether we truly are alone in the Universe!